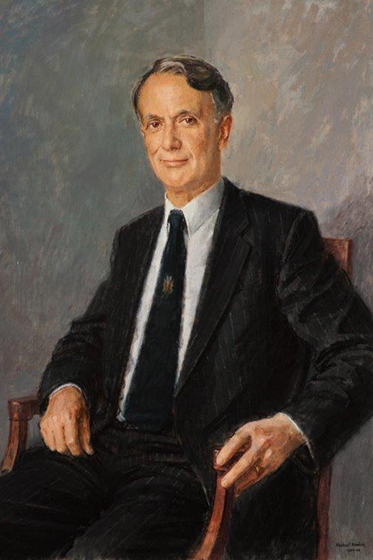 Professor Rawnsley was president of the College from 1981 to 1984.

Kenneth Rawnsley was educated at Burnley Grammar School. A State Scholarship took him to Manchester University where he graduated in medicine in 1948. He trained in psychiatry at the Department of Psychiatry at Manchester and at the Maudsley.

After working for a few months as a field investigator on the Stirling County Epidemiological Project in Canada he returned to the Institute of Psychiatry as a member of Aubrey Lewis' Medical Research Council Social Psychiatry Unit, at first in London, and from 1957 in Cardiff.

In 1964, while continuing as Head of the Medical Research Council`s Social Psychiatry Research Unit, Rawnsley was appointed to the first Chair of Psychiatry in the Welsh National School of Medicine. He established a vigorous, widely-based academic department closely integrated with the psychiatric services of South Glamorgan and a special teaching and research unit at Whitchurch Mental Hospital.

He was elected Dean of the College from 1972 to 1977. As chairman of Council, the Court of Electors and the Joint Higher Committee for Psychiatric Education he carried further the work of advancing the College's role in the improvement of postgraduate psychiatric education.

He took a leading part in the campaign for termination of the abuse of psychiatry in the Soviet Union and proposed the motion for its expulsion from the World Psychiatric Association at the meeting in 1984. He ensured that their return would be conditional upon evidence that wide ranging reforms had been introduced.

Wide recognition of his many-sided achievements is reflected in the units named after him in Wales and also in Manchester. He was further honoured by his election as Vice-Provost, an honorary doctor at the Welsh College of Medicine, and Honorary Fellow of the Royal College.

From 1972 to 1975 he was a Member of the Merrison Committee of Enquiry into the Regulation of the Medical Profession, and a member of the Warnock Enquiry into Human Fertilisation from 1982 to 1984. His services as Consultant to the World Health Organisation on many of its psychiatric projects and his participation in a large number of Department of Health and Social Services (DHSS) and the Medical Research Council (MRC) research committees give some indication of the range of the influence he exerted and the volume of creative effort he managed to pack into a career cut tragically short by illness and premature death.

During the retirement enforced by cancer he gave unsparingly his energy and used his tact and sensitivity and humane concern to create and manage the National Counselling Service for Sick Doctors.