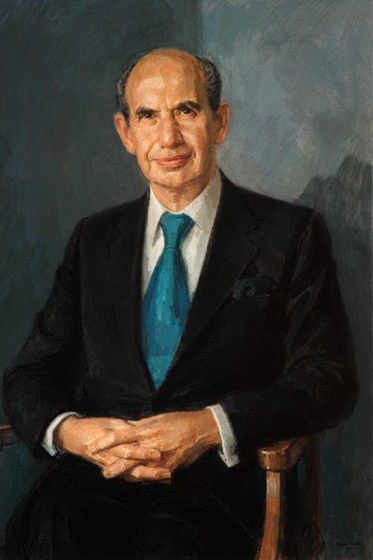 Professor Sir Martin Roth was president of the Royal College of Psychiatrists from 1971 to 1975.

He received his medical education at St Mary`s Hospital where he qualified in 1941, after qualification he trained in neurology at the Maida Vale Hospital, and at the Maudsley.

In 1950 he was appointed Director of the Clinical Research Unit at Graylingwell Hospital where he continued with his work on the differentiation of the mental disorders of old age.

In 1954 he deputized for Robert Cleghorn at McGill University, Montreal, the first of many visits to Canadian and American Universities, and it was in Canada and the U.S.A. that he first saw at close quarters a psychiatry that drew its main inspirations from psychoanalysis.

In 1956 he was appointed to the Chair of Psychological Medicine at Durham University. His new administrative and teaching commitments did not prevent him from developing his department as one, of the main centres of clinical research in this country and establishing units devoted to child and geriatric psychiatry.

From 1964 to 1970 he served as a member of the Clinical Research Board of the Medical Research Council, where he became the Chairman of one of its Grant Committees, and of the Working Party on the epidemiology of drug addiction.

In recognition to his many-sided work in psychiatry, he was knighted in the New Year Honours List of 1972.

One of his personal achievements as president, was his role in securing 17 Belgrave Square as a permanent home for the College.

Martin Roth was elected a Fellow of the Royal Society for his scientific achievements in psychiatry, particularly in the field of old age psychiatry.