In this section you can keep up to date with our media and public affairs.

'Teens on the Edge’

BBC NI presented a cutting-edge documentary on 29 October which explored the increasing number of children and young people being diagnosed with mental health issues in NI. 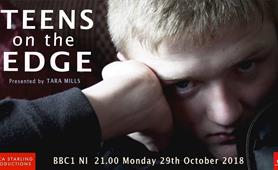 Presented by Tara Mills, ‘Teens on the Edge’ was a stark and hard-hitting programme. It began by pointing out that 10,000 young people had been treated for serious mental health problems in the past year. Adding that, since 2009, 144 children and young people under the age of 19 had taken their own lives in NI.

Tara interviewed, amongst others, Dr Richard Wilson, chair of our Child and Adolescent Faculty and his role was given great prominence within the programme. On the day of the broadcast itself, BBC News NI’s output was dominated by the story.

Dr Wilson reflected, “Mental health is everyone's business, not just that of CAMHS. It's a whole network working together and that's what's needed to make any progress towards recovery."

“The value of the film was in the realism and hope portrayed by the young people featured. Indeed, challenges were acknowledged, but featured also were the positive results that can be achieved by and with patients,” he added.

Also, on 30 October, the vice-chair of our Child and Adolescent Faculty, Dr Mark Rodgers, featured on the UTV ‘Fixers’ segment. Entitled ‘Me Too’ the piece covered a group of young women from Portstewart who are challenging sexual harassment.

Dr Rodgers explained, “Increasingly, we understand that trauma can be individually defined, so it can be a distressing event that exhausts a young person’s ability to cope with it.”

“If somebody experiences an infringement of their personal space like that, and they feel they cannot cope with that, then that would constitute a trauma and it could lead to secondary emotional problems like depression or post-traumatic stress,” he added.

Girdwood Hub in north Belfast was the venue for our World Mental Health Day (WMHD) outreach event on Sunday 7 October.  We teamed up with the IFA to support their ‘Ahead of the Game’ initiative at an event entitled, ‘Young People & Mental Health in a Changing World’, which was the theme for WMHD on 10 October. 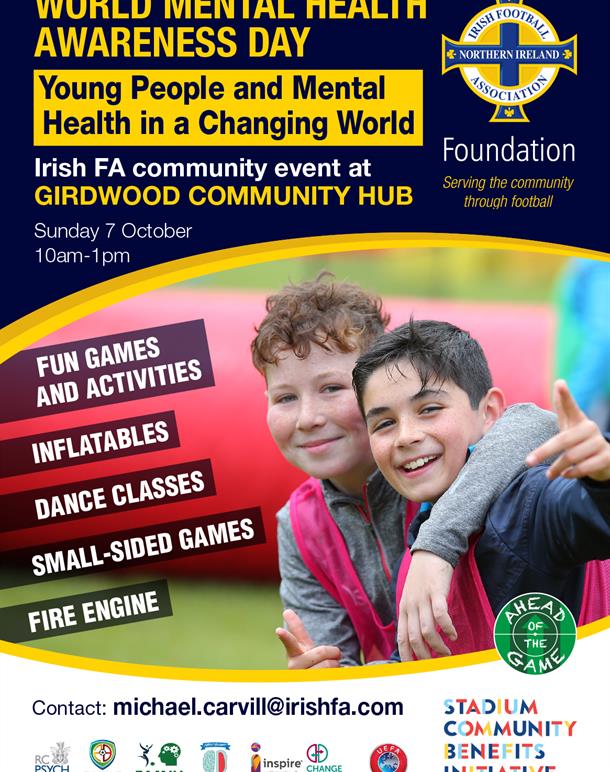 Over 400 young people and their parents were in attendance and the College was represented by Drs Maggie McGurgan, Holly Greer, David Bell and Hilary Boyd.  Members of Queen’s University’s Mind Matters society assisted as well as students from the Students Working Overseas Trust (SWOT) team at Queen’s.

Committee members were assisted on the College stand by members of Queen’s University Mind Matters, which is a student society passionate about educating the student body on issues surrounding mental health, as well as promoting a career in psychiatry. 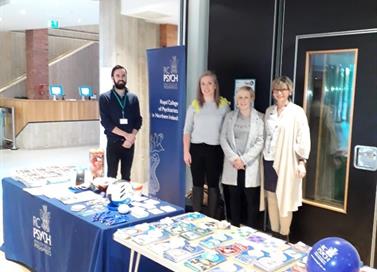 The Students Working Overseas Trust (SWOT) Medical Students also joined us to run a blood pressure clinic. We were pleased to have input from Lauren Lamberton, a Play Therapist from the Child & Family Clinic. The event saw attendance from dozens of youth teams from the IFA Small Sided Games. 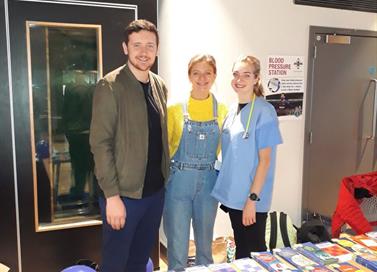 Pictured above are left to right Jordan Bamford, Chloe Gilkinson and Loren Moller from The Queen’s University

Despite the weather, there was a great atmosphere with children, young people and families enjoying the wide range of activities on offer and the opportunity to think about mental health and emotional wellbeing.

The news that Luke Jackson, Carl Frampton's opponent for his Windsor Park clash on 18 August, had been battling against obsessive compulsive disorder (OCD), prompted BBC Evening Extra to run a feature on its programme on 15 August.

Tasmanian-born Jackson, had previously talked about OCD explaining that, for him, "Training is easy, boxing is easy but life is hard."  Jackson said his OCD had pushed him to perfect techniques and helped drive him at training and said that he first became aware of OCD after witnessing his mother's obsessive behaviour.

Dr Gerry Lynch joined presenter Seamus McKee in the studio and discussed the causes, symptoms and treatments for OCD, together with its prevalence in wider society.  He highlighted what constituted clinically significant compulsive behaviour and the impact which this has on people's lives.

Further information on OCD is available in our mental heath section.