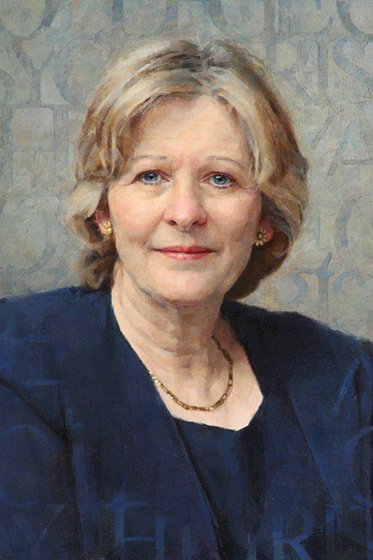 Professor the Baroness Sheila Hollins was President of the Royal College of Psychiatrists from 2005 to 2008.

She studied Medicine at St Thomas’ Hospital where she qualified in 1970. After qualification she trained in general practice in Southwark and Bermondsey and then joined a GP practice in Balham and Tooting part-time whilst starting a family. In 1974 she trained part-time in psychiatry at Queen Mary’s Hospital, Roehampton, and was fortunate to have excellent training in psychodynamic psychotherapy. She developed her interest in developmental and intellectual disability psychiatry during her training in Child and Adolescent Psychiatry at Westminster Children’s Hospital and Earls Court Child Guidance Clinic; and in 1981 was head hunted by Professor Joan Bicknell to join the first academic department of the Psychiatry of Mental Handicap in the UK at St George’s Hospital Medical School, University of London which had recently moved from Hyde Park Corner to Tooting.

In 1991 she was appointed to the Chair of the Psychiatry of Learning Disability at St George’s. In 1992 and again in 2001 she accepted part-time two-year secondments to the Department of Health as senior medical advisor on learning disability and autism. In 1993 her Winston Churchill Travelling Fellowship to the USA to study best practice in the treatment of behaviour that challenges, provided a firm foundation for future research, innovation, and policy influence. Her department grew to be a productive research and teaching centre, distinguished by its involvement of experts by experience in all of its work. In 2003 she was appointed Chairperson of the Academic Department of Mental Health Sciences at St George’s.

In 2010 she was appointed an independent cross bench life peer in the House of Lords. She is Emeritus Professor of Psychiatry of Disability at St George's University of London, and Honorary Professor of Spirituality and Health in the Department of Theology and Religion at the University of Durham. In 2014 Pope Francis appointed her for a four-year term to the Pontifical Commission for the Protection of Minors in Rome. She chaired the Scientific Advisory Board at the Centre for Child Protection of the Institute of Psychology of the Pontifical Gregorian University for a 5 year term from 2016.

She founded and chairs Books Beyond Words, a spin out company from St George’s which is now a Charitable Incorporated Organisation, was formed to disseminate research and best practice in story form and to empower people with intellectual disabilities, health, education and care professionals. The series was co-published by St Georges and the RCPsych for several years.

She has received honorary doctorates from the Universities of Durham (Letters), London (Divinity), Sheffield (Medicine), Bath (Laws) and Worcester (Science) in the UK and from the Australian Catholic University in Melbourne (Doctor of the University) as well as the Bronze medal of the Institute of St Martin in Florence for her work in the disability field.

She has 4 children and 4 grandchildren (her eldest daughter is a child psychiatrist and her son has an intellectual disability and autism).