This section contains Members obituaries, and information about how to submit an obituary.

How to submit an obituary 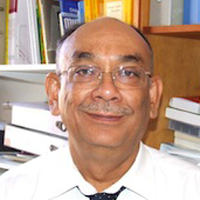 For 27 years as an NHS consultant, Sab Bhaumik lived a particular routine on Saturdays. He would turn up in his office at Leicester Frith Hospital to carry out the still pending bits of his academic work which invariably included teaching. Turning up to benefit from his generosity, would be a large number of students - from psychiatrists preparing for the Royal College’s membership exams to registrars getting ready for consultant interviews and consultants seeking guidance on assorted issues - clinical and otherwise.

I often teased him that these Saturday gatherings were hisdurbar and the response from this large hearted man was always a loud guffaw, as he continued with his long sustained routine. As a close friend remarked, Sab Bhaumik died the way he lived- on a Saturday afternoon in the grounds of Leicester Frith- albeit this time the cardiac ICU of Glenfield Hospital, surrounded by a large number of people he had taught over the years, an extended family that owed so much to this professor who always cared, who always had time.

Sab graduated in medicine from RG Kar Medical College in Calcutta in 1978 and then went on to work in the West Bengal Health Service in a place called Khatra. This rural outpost was as much a contrast as possible from the teeming metropolis that was Calcutta. What was lacking there in equipment, medication and infra structure, Sab made up with his commitment, compassion and honesty. These were traits that particularly endeared him to his patients who often travelled from miles around to see him. When he left after 3 years there were at least 200 people around the bus, waiting to see him off. Sab went on to join an MD programme in Pharmacology at the Benares Hindu University and it was with the medical students there that he honed the teaching skills that would go on to make him an inspirational communicator.

Coming to the UK in 1985, Sab Bhaumik chose Psychiatry, a medical specialty where he truly found his calling. Starting with the psychiatry rotation in North Wales in a hospital where his only son now works, he went on to complete a Diploma in Psychiatry from the University of London and then the MRCPsych. In February 1992, he joined Leicester Frith Hospital as a Consultant in the Psychiatry of Learning Disability. Over the next 27 years, he would remain with what is now Leicestershire Partnership NHS Trust, working in a variety of roles - lead clinician, clinical director, medical director and then after his retirement in 2013, a consultant psychiatrist and senior medical advisor to the board.

His influence in shaping policy went beyond the local. Within the Royal College of Psychiatrists, he was elected first as Chair of its Trent division and later as the Chair of the Faculty of Psychiatry of Intellectual Disability. He was credited with pioneering the tiered approach to mental healthcare provision and developing accessible information on medication for people with intellectual disability.

An author of over 100 peer reviewed publications and book chapters, Sab edited two editions of the internationally acclaimed Frith guidelines for psychotropic medication use, was a member of the NICE guidelines panel on mental health problems in people with learning disability and edited with me, the Oxford Textbook of Psychiatry of Intellectual Disability, due to be published in January 2020. His work with diaspora organisations within the RCPsych, the struggle to gain equity of treatment outcomes for patients from BAME communities and the campaign to target differential attainment among trainees from ethnically diverse backgrounds were some of his passionate causes.

The honours were many too. In 2005, he was the winner of the Hospital Doctor Award for Psychiatry Team of the Year, in 2006 he was awarded the OBE for services to medicine and in 2015, the Royal College of Psychiatrists gave him its highest honour, the Honorary Fellowship. Through all this, Sab remained his usual self deprecating self, never taking himself too seriously.

Through all this, his greatest attribute was that he remained a true fighter for his patients - a marginalized group of people with developmental disabilities and mental health difficulties who often had neither equity of access to healthcare nor equity of treatment outcomes. In his struggle to secure this equity, he was willing, sometimes at considerable personal cost, to speak out against the “anti intellectual pieties and facile compassion, all so triumphant in contemporary medicine,” that effectively disadvantaged patients from marginalized groups.

Sab Bhaumik died on 9 November 2019 at the age of 66, following a massive myocardial infarction. He is survived by his wife Sushmita and son Sugato. Sushmita, for long his anchor and arguably the only person who could possibly tell him no, found in the depths of her unexpected loss, the words that describe him best -  “He had that magnetic quality to attract people- his honesty, sincerity , compassion and ability to rise above petty jealousies made him one of a kind. Like a comet he blazed into our lives touching everyone with love, laughter and hope – the world darkening as he left”.

You can download lists of our members who have sadly passed away. We are grateful for the work they did for both the College and Psychiatry.