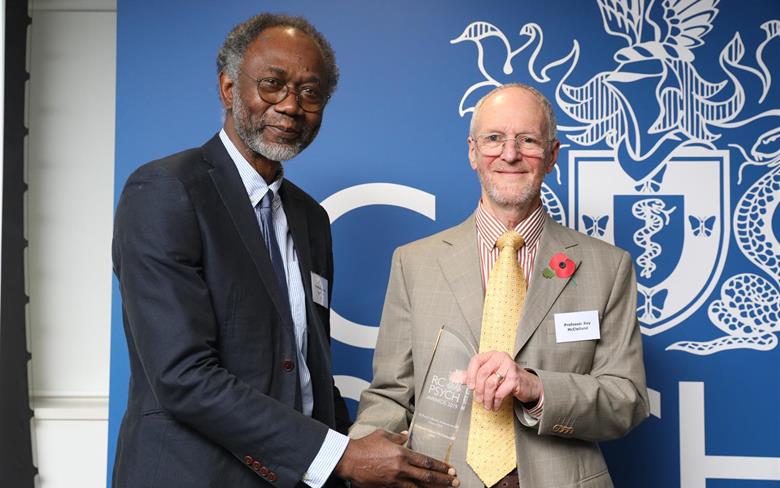 Professor Roy McClelland OBE has been awarded the prestigious Lifetime Achievement Award from the Royal College of Psychiatrists during their annual awards ceremony, held on Friday.

The awards mark the highest levels of excellence and achievement within the field of psychiatry, and are given to the Psychiatrist of the Year, Patient Contributor of the Year and Medical Student of the Year, among others.

Read more about the winners and see pictures from the ceremony.

An academic leader for over two decades, Roy was responsible for all Northern Ireland’s undergraduate teaching in psychiatry and postgraduate psychiatry training, helping those students who chose psychiatry to deliver excellent care.

He was a trustee of the Northern Ireland Centre for Trauma and Transformation, providing psychotherapy after the IRA bombing in Omagh in 1998. He later worked with emergency services in New York after 9/11, in Sri Lanka following the 2004 tsunami, and in Sarajevo and Nepal.

Professor Wendy Burn, President of the Royal College of Psychiatrists, said: “The RCPsych Awards are all about recognising and rewarding contributions to the mental health sector, but the Lifetime Achievement Awards is a cut above the rest.

“I am so pleased that we’re able to publicly honour Prof McClelland for not only improving the lives of people living with mental illness in Northern Ireland, but also people across the globe affected by international emergencies and disasters.”

Dr Shubulade Smith CBE received the coveted Psychiatrist of the Year award. She has worked tirelessly to improve services and was instrumental in her role on the Mental Health Act review committee, helping to drive forward the recommendation to improve access, experience and outcomes for BAME people.

The RCPsych Awards’ judges, said: “It becomes harder each year to select the winners of these sought-after awards. We were delighted to present Prof McClelland with our most prestigious accolade.”