New Chair, Dr Richard Wilson, reflects on a Carrickfergus childhood and his hopes as he takes up leadership of the College in Northern Ireland. 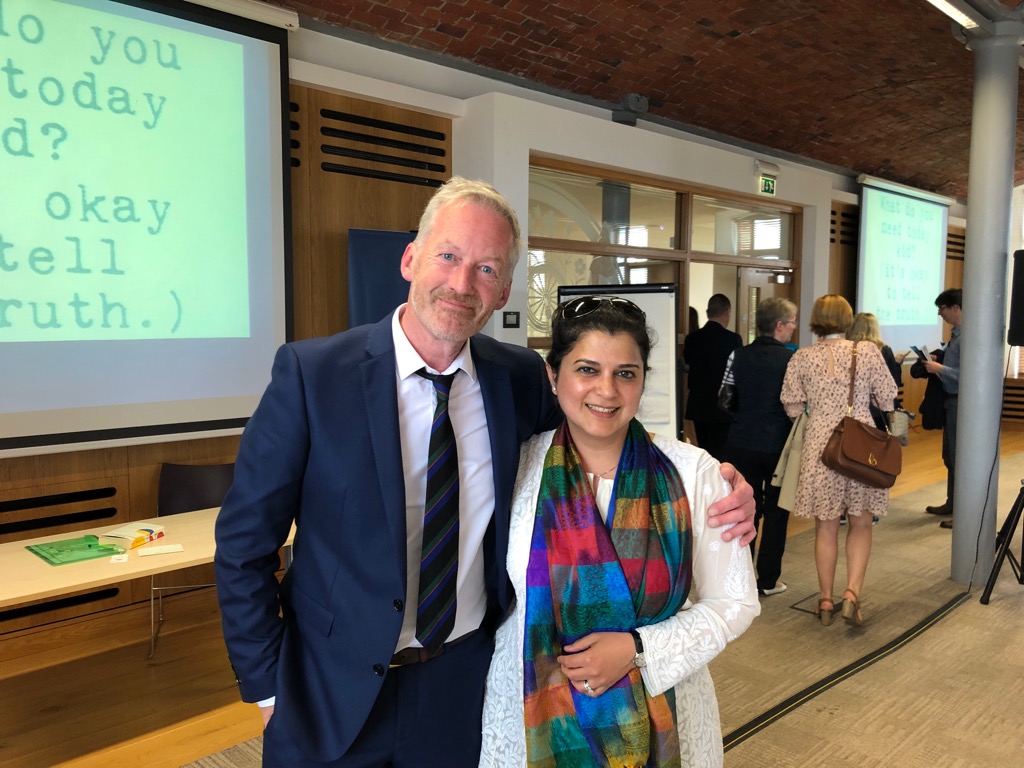 Dr Richard Wilson has fond memories of growing up in the historic town of Carrickfergus. He can trace his family’s roots back through many generations. The family general store was the hub of the town for many years.

"We lived right in the centre of the old town," he recalled. "Everybody knew us, and we knew everybody! There was always something interesting going on and before the onset of the Troubles in 1968, when everything changed it seemed like a golden time. I can remember steam trains being a regular thing, gas lighting in the houses and playing in the streets without fear or disturbance.

"I share this birthplace with Louis McNeice, the brilliant Irish poet, classicist and keen observer of human relationships. His father was the Rector in Carrickfergus just before WW1 and Louis lived until the age of 10 in the Rectory which was just along the road from where I grew up. To Louis, I probably trace the origin of my lifelong love of literature and the classics. His poetry is full of memory for me. When I go home I always find myself reconnecting with his Carrick Revisited:

'Back to Carrick; the castle as plumb assured as it was thirty years ago

Which War was which?

Here are new villas, here is a sizzling grid

And the child`s astonishment not yet cured'

"My school experience was very enjoyable; it seemed a haven of safety in troubled times. I enjoyed all subjects: art, music, science, classics and, in particular, history. My history teacher Rab Wilkinson was an absolute inspiration and showed me the value of evaluating and articulating evidence as well as any scientist. When the exam years approached, I was sad to have to narrow down the curriculum. In fact, I have always believed that all learning is connected, that there is synergism between the arts and science; that each enhances the other.

"Broadly speaking I still hold to this view. Now I do recognise that specialism may be necessary to achieve excellence, but I have always encouraged trainees and colleagues, as well to stay strongly connected to the general body of psychiatry and medicine. I feel the College is an important cohesive force for learning and practice and is enhanced by its diversity and breadth as well as depth of learning.

"At school career paths in those days were not mapped out with the same determinism and apparent reductionism that I see for kids today. I was interested in people, in their stories and how the world works (or doesn’t!) through the twin prisms of social relational study and science. Experience of illness including mental illness in my family possibly influenced my career choice towards medicine, but it was a close run thing between medicine and classics and history!

"I graduated from QUB in 1986, somehow managing to do a BSc in Biochemistry along the way. A long apprenticeship in surgery, cardiology, A&E, medicine and finally neurology gave me rich and varied experience which continues to have currency 30 years later! In fact, again I was in no hurry to specialise. I think it was during my neurology experience in RVH, where I worked for Michael Swallow, the doyen of his specialty in that era in Belfast and a veritable Renaissance man, that I became increasingly aware of the connection between medicine and psychiatry and the broad approach to human suffering and its remedy that a career in psychiatry might offer.

"My first Consultant in Psychiatry was Dr Jack Noble. His advice to me at the start was to read widely (this was no problem) and that I would need endless patience (this remains a challenge!). The progression to the career ladder in NI Psychiatry in those days involved a hugely daunting interview in front of what seemed like all the assembled Consultants in Northern Ireland at the end of the biggest table I've ever seen! I was doing ok until I mentioned auditory evoked potentials as a potentially fruitful area of research in Schizophrenia ….for some reason there were gales of laughter and Dr Galloway who was chairing said …'you really don’t want to tell us any more about that , do you?' To which I answered …'No!'. I later learned that all the candidates on that day had tried to discuss this very topic. Happily, I was appointed and spent some very educational years in learning disability, adult and old age psychiatry placements before finding my metier in child & adolescent psychiatry

"I've been involved in the local College since its inception. I remember running a very successful public speaking competition for schools with Nora McNairney and Jim Anderson. This type of engagement I very much enjoy and I think it has great value in reducing stigma and developing relationships with the public whom we serve.

"In 2015 I was elected to the Chair of the CAP Faculty. It has been one of the most enjoyable experiences in my career. The opportunity to make connections and relationships locally and nationally has been wonderful and it has been very satisfying to see so many members of the CAP Faculty contribute in so many ways to improvements in mental health and in care and treatment services. A highlight was the hosting of the UK Conference in November 2019 and here once again the connections with key players in CAP nationally and internationally particularly in the fields of Academic Child psychiatry and also policy development has been valuable. I am delighted to have been asked to stay on the UK CAP Executive as a co-opted member

"At this time, I remain a busy clinician and remain in leadership roles in CAP at Trust level and Regionally. I love clinical practice; always have. A second love is medical education though I always think I learn as much (honestly, probably more) from trainees than they ever learn from me.

"The path to the Chair of this College was not a direct or even very premeditated one. I took on the challenge of the election because I have seen the great value the College adds to mental health development and practice in NI and I am absolutely thrilled to have the opportunity to serve. Thanks to the vital work of our RCPsych NI office, the galvanising reforms and systems introduced by Professor Gerry Lynch during his chairmanship AND the work of our members, the NI College is strong. In fact, without being in the least triumphalist I think we punch well above our weight nationally. We are and will be at the very core of the emerging Mental Health Strategy.

Together we will argue for services that are fairly distributed, excellent, equitable and properly funded. We will do this despite the additional challenges that the tragedy of Covid-19 has placed upon us and the rest of society

"I look forward to working with you all over the next four years. Many of you I know already as colleagues and friends. To those I have yet to meet …I greatly look forward to getting to know you, exchanging ideas and working together.