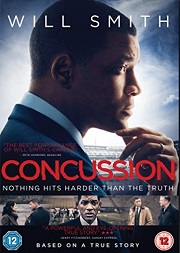 Concussion, written and directed by Peter Landesman, was released in the USA in 2015.
The film tells the true story of how Chronic Traumatic Encephalopathy (CTE) was identified and named in 2002 by forensic neuropathologist, Dr Bennet Omalu (played by Will Smith), while he was working in Pittsburgh, USA. Omalu identified CTE as an entity after studying the deaths of several retired American football players.
He realised that these former players had suffered significant psychiatric morbidity in the years after their retirement from the game. This discovery has contributed to a greater understanding of the long-term effects of repeated concussions in those competing in contact sports and has influenced attitudes to the management of concussive episodes on the field in a wider number of sports such as rugby, ice hockey and horse racing as well as in American football.
There has also been a particular focus on the management of concussion in school age children, with more stringent pitch side assessments that prevent participants from re-entering a game until they are assessed as having fully recovered from a concussion under supervision.

As well as telling the story of his scientific discovery, the film also depicts the enormous struggle that Omalu, an immigrant from Nigeria, and his few supporters faced when trying to report their findings to the scientific community and the wider world of sport, as his results appeared to threaten the corporate interests of the National Football League (NFL). As such, Concussion is a film about whistleblowing and Omalu has been likened to ‘David’ as he took on the NFL seen as ‘Goliath’. Although this aspect of the film is presented in the style of a classic Hollywood drama, the film still succeeds in raising the profile of an important and ongoing issue, namely how hard it may be to tell truth to power.

The film has been nominated for several awards, including a Golden Globe nod in 2016 for Will Smith.

Concussion opens with the death of former American football player Pittsburgh Steelers centre Mike Webster at the age of 50. His postmortem is carried out by Omalu in his very particular style of working. Webster's pre-morbid psychiatric difficulties are noted by Omalu and when another retired player presents with psychiatric problems before his early death too, the pathologist starts to look for a common neuropathology.

As Omalu suggests a connection between the repeated head traumas suffered in the course of playing American football and the microscopic findings post mortem, he begins to find his work obstructed and colleagues turning against him.

When he loses his research funding he is so determined to continue that he uses his own monies. It is only when a former football team doctor joins him and supports his research that he is able to take his findings forward and present them to the wider scientific community. Omalu’s resilience and determination are admirable but his ultimate satisfaction does not occur without a test of his character and of his close personal relationships.

Concussion in sport is now increasingly recognised as something that needs more research, particularly into its long-term effects.

The International Concussion and Head Injury Research Foundation, (ICHIRF) is a London based not-for-profit organisation that has been created to carry out independent research into concussion and head injury. In its research project Concussion in Sport it aims to ascertain whether there is an increased incidence of neuro-degenerative disorders (such as Alzheimer’s disease, Parkinson’s disease and Chronic Traumatic Encephalopathy) in retired sportsmen and sportswomen who have competed in contact sports and sustained concussions, and whether these disorders might onset at an earlier age in this population.

The study is currently recruiting both retired athletes and controls and it involves an online questionnaire (this takes about 15 minutes) every year for at least the next 4 years.This research foundation works closely with the charity called The Concussion Legacy Foundation in America, whose website has a wealth of material for learning more about the subject and in particular some very good information about CTE.

Earlier this year the NFL finally acknowledged a link between playing American football and CTE (read this Frontline article written by Jason Breslow in March 2016) following the research findings of Boston based neuropathologist, Dr Ann McKee. In her research, McKee found evidence of CTE in 90 out of 94 brains she examined postmortem of former NFL players. In a fascinating 46 minute Frontline video interview, she describes her work and her consultations with the NFL about the effects of repeated mild brain trauma that takes place during the course of a football game.

She recounts how she had first encountered Omalu’s evidence in a poster presentation at an Alzheimer’s disease conference and later how she was asked if she would examine the brain of a football player by the co-founder of The Concussion Legacy Foundation, former wrestler Chris Nowinski.

The evidence is now so strong that current players are much more aware of the risks that playing presents and last year Chris Borland, a promising player for the San Francisco 49ers, quit at the age of 24 after fearing for the effects of repeat concussions on his health (see BBC report).

For anyone involved in providing medical support to players during competitive contact sports, there is a useful Pocket Concussion Recognition Tool on the BMJ website taken from the Concussion Statement on Concussion in Sport, published in the British Journal of Sports Medicine 47 (5), 2013, by McCrory at al, which provides clear guidance on screening anyone who is suspected of having suffered a concussion.

This film highlights a topical and very important issue that is especially relevant to anyone working in the field of Acquired Brain Injury or Sports Medicine.

• More information about Concussion can be found at IMDB, as can a short trailer.