This animation contains adult themes of a sexual nature and nudity. It is rated 15. 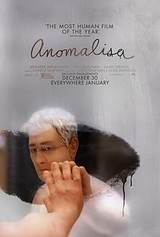 Anomalisa is a feature-length stop-motion animation film directed by Charlie Kaufman and Duke Johnson, its screenplay written by Kaufman and based on an earlier radio play that he wrote in 2005.

It has been very well received by critics, was nominated for an Academy Award in 2016 and has received 20 awards.

Stop motion is a painstaking technique of animation, which involves taking approximately 25 photographs per second of a puppet or scene as minute changes are made to them (an article written by Tim Martin in The Telegraph newspaper, in March 2016, provides a good understanding of this method of animation as he considers Kaufman and Johnson’s production).

Anomalisa is a psychological drama centred on the main protagonist Michael Stone (voiced by David Thewlis), an author and motivational speaker in the field of customer service. He is suffering from mid-life depression and is searching for a special person that will make him happy as he struggles with a sense of boredom and a feeling that everyone is the same.

The soundtrack that accompanies Anomalisa’s opening credits presents us with a cacophony of voices of increasing intensity.

We see Michael on an airplane travelling to Cincinnati. He takes some prescribed medication just before landing and also looks at an angry letter from a former girlfriend.

As he walks through the airport terminal, Michael blocks out the voices around him by listening to some calming music through headphones.

The viewer might observe the similarity of the faces that surround Michael. Once Michael is in a taxi driving to The Fregoli hotel, the attentive viewer may become aware that the driver also has the same face and voice as the people chattering in the airport terminal.

The taxi driver spots that Michael has a British accent, asks where he is from, and urges him to visit the local zoo. Michael informs him that he actually lives in Los Angeles and then asks if there is a toy store near to his hotel.

Once Michael arrives at the hotel

Once in his hotel room, Michael makes a phone call home to his wife Donna and their son Henry. The lack of emotional connection with his family is palpable.

He tries to rehearse his presentation for the following day but his thoughts soon turn once again to his former girlfriend Bella, still living in Cincinnati. He calls her, wanting to apologise for the way in which he abruptly ended their relationship many years before, and tells her that he misses her. He asks her to meet him in the bar of the hotel. He tells Bella that he thinks he has psychological problems and she comments on his drinking habit. Michael suggests that they go upstairs to his room, which shocks and angers Bella prompting her to leave the bar immediately. Gaining no satisfaction from the meeting, Michael seems sadder and more alone than ever.

He goes out to the suggested toyshop in search of a gift for his son, but discovers that the taxi driver has actually sent him to a sex shop. Here he finds an antique Japanese doll, a sex toy, which he buys despite it being so obviously inappropriate as a gift.

Back in his room and after a shower he has a strange perceptual experience while looking at his face in the bathroom mirror and at the same time hears the voice of someone else nearby which frightens him. He runs out of his room knocking on doors nearby.

It is then that he meets two women Emily and Lisa, who are booked to see him speak at the customer services conference the following day. Michael invites them to have drinks in the bar and he becomes instantly attracted to Lisa, in part because of her lovely voice (which is distinct because it is actually voiced by a female actor).

Lisa has had past trauma and is marked by a scar on her face. Michael invites her back to his room and seduces her by trying to counter her lack of self-esteem related to her disfigured face and her feelings of alienation. She sees herself as different, an anomaly, and Michael creates a name for her and the film in Anomalisa. He feels that Lisa is ‘the special one’ for him, the person who might release him from his entrapped and boring life. After having sex they go to bed and sleep. Michael has a torrid nightmare in which he experiences fear and paranoia and expresses the belief that everyone is the same one person, except for him and Lisa.

Once awake and during their breakfast the next morning he hears Lisa’s voice differently, overlaid by the same male voice of all of the other characters, reprising the taxi driver’s recommendation to visit the local zoo. At this point he begins to feel different and suspicious about her. Michael accuses her of being controlling and seems to become more agitated, even as he discusses plans to leave his wife for her. He is so distressed that he finds himself unable to perform at the conference presentation a little later.

The film ends with him returning home to his wife and son and asking her "who are you Donna, who are you really?"

This is a film about mid-life depression, which also hints at a rare delusional disorder called the Fregoli syndrome, in which the person believes that everyone is actually the same person in disguise.

It is classed as one of the Delusional Misidentification Syndromes (DMS) and the signs and symptoms usually occur in the context of other disorders, most commonly schizophrenia, affective disorders, substance misuse, organic brain disorders and traumatic brain injury. More recent studies using neuroimaging suggest that these DMS may be associated with identifiable lesions in the right frontoparietal and adjacent regions of the brain.

In the extra features on the DVD, Kaufman acknowledges that his interest in the Fregoli syndrome was sparked by reading an article about the condition, which inspired him to incorporate the concept into his script although he denies that Michael’s character actually suffers from the syndrome (more about this is outlined in an article written by Julia Llewellyn Smith in  The Telegraph newspaper in March 2016).

Anomalisa is an intriguing animation, which powerfully conveys emotion and psychological crisis through its puppets in a most remarkable way, including a sensitively portrayed scene of sexual encounter. At times the film leaves the viewer unsure of what they are seeing and perhaps lacking trust in knowing what is real and what is not real in the protagonist’s world. This filmic experience might open up a window on the world of someone suffering from abnormal perceptions and in particular of the bizarre Fregoli delusion. The film will sharpen the viewer’s powers of observation and I cannot recommend it more highly, especially as it invites any mental health professionals to consider a more unusual and challenging diagnostic formulation in the context of Michael’s mid-life depression.