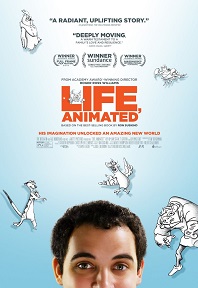 Life, Animated is a documentary film released in 2016, directed by Roger Ross Williams, based on a book of the same name written by Ron Suskind.

In it Suskind tells the story of his son Owen, who was diagnosed with autism at the age of three and who discovered a passion for Disney’s animated films, which later provided him with a means to communicate with his family and to make sense of his emotions more effectively.

As the director is quoted as saying in an Oscar-contender interview at indiewire.com, “It’s really a film about the power of actual story, Owen is someone who was raised on myth and fable”.

The film is nominated for Best Documentary Feature in the 2017 Academy Awards and has already won eleven other awards.

Life, Animated opens with some home video footage of Owen, a chatty young toddler, play-fighting with his father Ron in their yard. He has an older brother Walt with whom he enjoys watching television. But everything changes as Owen approaches his third birthday and suddenly becomes mute and inconsolable, resulting in a diagnosis of autism.

The family observes that Owen still finds comfort in the animated films he had previously enjoyed and can continue to share this activity with his sibling. When his parents make the incredible discovery that they can communicate directly with Owen if they become a character in one of his Disney films they start using the scripts to engage with him in conversation.

This is precisely how their son first begins to talk again after more than a year of silence. As Owen learns all of the scripts from each film by heart it becomes clear that he is using the films to communicate and express his feelings and emotions.

Once at school, it emerges that Owen is especially identified with the supporting characters in many of the films and he becomes one with these ‘Sidekicks’.

Owen has a talent for drawing and skilfully reproduces the characters he loves on paper and he learns to read and write using the credits at the end of each film.

His identification with the ‘Sidekicks’ is helpful when he is forced to deal with being bullied at school.

The film uses some exquisite animated scenes uniquely created to supplement the account of Owen’s earlier experiences, including with his ‘Sidekicks’, and these animations grow in complexity from black and white drawings to full colour as they depict his own emotional development.

Life, Animated also contains numerous clips from the relevant Disney films that are so important to Owen in negotiating major challenges and transitions in his life.

This is most poignantly illustrated by his watching of Dumbo as he packs up his things to move out of the family home after his graduation and then the viewing of Bambi (the scene in which Bambi’s mother dies) after his parents leave him in his flat for the first night.

Life, Animated includes clips from home video to show excerpts from Owen’s life at all stages through his childhood into young adulthood but these are continually interspersed with filming of his current life.

Moving out to live in his own accommodation

These contemporary scenes build through his final session of the Disney club he founded at his high school, his graduation, some therapy sessions to prepare him for his move into his own accommodation, the actual relocation and once there his experience of breaking up with his girlfriend of several years, Emily.

This breakup presents Owen with a huge emotional challenge and the film depicts his struggle with anxiety and loss very honestly.

The viewer is left with no doubt as to the challenges ahead for him, whilst at the same time the film details Owen’s transformation into an ambassador for autism exemplified by an invite to speak at a conference in Paris.

Here he shares his passion for Disney films and his family’s use of them in helping him to escape from a state of mutism to a place where he can communicate effectively enough to obtain work in his local cinema complex. This makes a fitting conclusion to the film.

Life, Animated is a documentary film that highlights the therapeutic power of the creative arts.

The Suskind family’s story helps to underline the positive benefits they found in sharing in the affinity or passion of their autistic son in order to open up a medium for communication that allowed them to connect with him socially.

The exaggerated expressions on the faces of the characters in animated films encouraged him to learn about the emotions and feelings of both himself and others and the scripts gave him a means of saying what he felt.

It is hard not to be moved by watching Owen engrossed in the scene in which Bambi painfully calls out for his lost mother just after his parents have delivered him to his first night alone in his supported living accommodation.

This is a very positive film to watch but it also doesn’t shy away from capturing something of the exhaustion that Owen’s parents experience as they must join him endlessly in his Disney world in order to communicate with him, or of his brother’s sense of responsibility as he wonders what the future holds once he is solely responsible for Owen’s wellbeing.

It certainly demonstrates the powerful and positive effect that strong family bonds, with a huge capacity for love, kindness and endless tolerance, provide for someone like Owen suffering from autism.

Ron Suskind has written an interesting account of his experiences in a New York Times article titled ‘Reaching my autistic son through Disney’, published in March 2014 and Ron and his wife Cornelia have created an informative website also called Life, Animated (no longer available), in which they offer insights into the techniques that they have found beneficial during their parenting of Owen.

There is a particular focus on the passions, which they call Affinities that those with Autism Spectrum Disorders often have. There are some personal resources based on their experiences with Owen and the website also includes input from the psychologist Dr Dan Griffiths, who supported the Suskinds in developing the concept of ‘Affinity therapy’.

Life, Animated provides a beautifully crafted individual case study of autism that gives important insight into what it is like living with the disorder and, if viewed alongside a visit to The National Autistic Society website, it would provide an excellent learning experience that follows on perfectly from my last blog on Asperger syndrome in considering the Autism Spectrum Disorders.