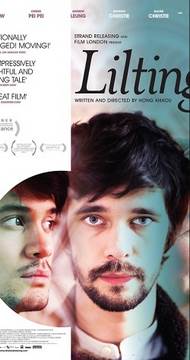 Lilting is the first full length film written and directed by the Cambodian born British director Hong Khaou. It was released in the UK in 2014.

It is a study of grief that brings together Richard and Junn, respectively the British lover and Chinese Cambodian mother of Kai, a young man killed suddenly in an accident.

Despite both living in London, Richard and Junn do not share a common language to communicate the complexity of their feelings and emotions as Junn has never learnt to speak English. She is also unaware of her son’s gay relationship.

Beautifully filmed and with exquisite performances by Ben Wishaw as Richard and Pei-Pei Cheng as Junn this is a deeply powerful examination of the role that language and culture play in our ability to understand others, especially in the context of grief.

The film was nominated for a BAFTA film award in 2015 and won a Cinematography award at the Sundance Film Festival in 2014.

Lilting opens with Kai visiting Junn in the room of her residential care home. It quickly becomes clear that this is a flashback. Junn seems sad and lost.

When Richard visits Junn in the residential home they struggle to connect without a common language but Richard is confronted by her indifference towards him.

Richard learns that Junn has a ‘suitor’ in the form of Alan, another resident at the home, who gives Junn flowers every day despite having no ability to talk with her.

As Richard is determined to see more of Junn, he arranges to pay a female friend Vann, who speaks various Chinese dialects, to translate for him and they visit the residential care home together.

Initially, Richard introduces Vann as someone who can assist Junn and Alan with communication, but the opportunities also emerge for Junn and Richard to discuss Kai.

Junn has no understanding of the relationship her son had with Richard and several flashbacks reveal that Kai had arranged for his mother to move into the residential home because he could not have her in his home without her knowing about his homosexuality.

Crucially, the flashbacks also reveal that Kai had planned to come out to his mother just before he died.

Richard has the need to share his grief with the one other person closest to Kai but knows that he can’t do this until she understands the true nature of his intimate relationship with Kai.

As part of his own grieving process Richard seeks closeness with Junn and perseveres in visiting her until he feels able to invite her back to the home he and Kai shared where he can give her Kai’s belongings.

Before the truth is revealed, Richard is drained by having to stifle the outward expression of his most painful sadness.

The final scene that takes place in Richard’s home brings the long awaited revelation by Richard that he and Kai were in a gay relationship and that Kai had been ready to tell her this just before he died. By this time, Junn and Richard seem to have forged a more positive bond.

Lilting is a subtle and gentle film that immerses the viewer in the lives of the two main protagonists and of their emotions as they struggle to process the sudden loss of the person that was closest to them. As such, it highlights that grieving is a uniquely personal process governed by so many factors and not restricted to any distinct time period and that is almost universally assisted by a need to share sadness and memories of the lost one.

Funerals are a ritualised way of bringing people together to do just such a collective remembering whilst also acting as a celebration of life. Secrets and hidden relationships inevitably get in the way of any shared grieving.

In Lilting this is perfectly illustrated by the painful realisation Richard has that he must ultimately comply with Junn’s wishes to have Kai’s ashes before she knows the true nature of her son’s relationship with Richard.

The issue of language is always centre stage in Lilting, something that is so relevant in our current multi-cultural society in which understanding others may be made more challenging by any language barriers.

The observations presented about the use of translators in the scenes with Vann are particularly pertinent when Richard says something and immediately asks that it not be translated, realising just in time that it’s the wrong message to give. However, Vann also shows that there are hazards to translating emotionally charged messages when she cannot help herself from saying something to Junn that was not requested and causing upset to her as a result.

In addition to this, the film demonstrates how much we can communicate non-verbally when someone is speaking a language that we do not understand. Deliberate choices are made during certain scenes of the film that leave the viewer without a translation into English for what is being said by Junn and yet still offering a strong sense of what she is feeling. In this way the film gives very useful tuition on what it is like to conduct an interview through a translator.

The relationship between Alan and Junn in the residential home offers the opportunity to reflect on the nature of intimacy when there is a fundamental lack of knowledge available about a person’s background, culture, values and experiences and when these cannot be explored through common language in an ongoing way.

The physical comfort that both gain from holding hands, hugging, dancing and kissing clearly meets a deep need for both elders but is it possible for a more intimate bond to develop beyond this? This question is answered when Vann the translator offers Alan and Junn the chance to talk and question each other more honestly, bringing a reality to their relationship that had previously not been possible. Once they know each other better, it is Junn who decides to end the liaison.

These issues of communication and language are key to the work mental health professionals must do and this film provides an excellent reminder of just how hard it can be to understand another person when we do not share our first language and must rely on translation by an intermediary.

I would highly recommend this film.