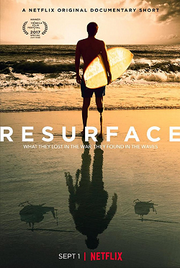 Resurface is a short documentary film, lasting twenty six minutes, directed by Joshua Izenberg and Wynn Padula, that was released in the US in September 2017 on Netflix.

The film examines the work of a Californian organisation called Operation Surf, founded by Van Curaza, a former big wave surfer, which offers instruction and mentoring in the art of surfing to war veterans suffering from both physical and mental disabilities acquired as a result of active combat.

The ‘ocean therapy’ as it is named is designed to help the wounded veterans with their recovery, offering a purpose, setting physical goals and providing the camaraderie that many lost when they left the military.

It has won two awards, including a Special Jury Mention for Best Documentary Short at the Tribeca Film Festival 2017.

The story initially focuses on an Iraq war veteran called Bobby Lane and includes interviews with him and his partner. Together they describe some of his symptoms of Post Traumatic Stress Disorder and recount just how close he came to committing suicide before he got the opportunity to try one last experience that he had always been keen on having, which was to surf. After his first session, he was hooked and through Operation Surf he began to experience a steady recovery aided also by his medication.

His engagement in the task of self-improvement was so positive that he soon became not only an accomplished surfer but also a mentor for others coming into the programme. From Bobby’s story, the film moves on to show other veterans having their first experiences in the ocean, some of who have extraordinarily severe physical disabilities. Some are double or triple amputees and one veteran featured has significantly impaired vision and hearing.

Resurface effectively portrays the complete absorption of each veteran in the task of learning to be on a surf board and finally mastering the skills required to stay there.

These are individuals who have relished the physical demands of being in the military before they were disabled and they clearly respond to the unexpected possibility of conquering a very challenging physical task once again.

The full immersion of these individuals in the process seems to be a most exquisite exercise in mindfulness, with complete focus on the present moment being required in order to achieve the goal of catching that first wave. As the film unfolds, the positive effect on the veterans is evident as they regain a powerful purpose in their lives.

The charity, Amazing Surf Adventures, has a number of initiatives in America offering ‘surf therapy’ to veterans and in the UK it resulted in a joint venture called Op Surf UK, in 2016 in Cornwall which was supported by the Endeavour Fund and by Help For Heroes Sports Recovery.

Watching Resurface is a life affirming experience that showcases the power of social networks, interpersonal relationships and physical exercise to support individuals who are struggling to cope with life. As there is increasing awareness within society of the important therapeutic role that social interactions and physical exercise can play in the management of many mental health problems, this film serves as a powerful reminder of just how effective meaningful activity can be. In the field of mental health the film is a perfect reminder that we must always challenge those in our care to use a wide range of therapeutic options as part of their recovery.