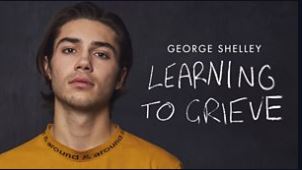 Learning to Grieve is an hour long documentary produced in 2018 for BBC3 featuring the former boy band star, George Shelley, in which he describes his experience of grief and depression following the sudden accidental death of his younger sister, Harriet, in May 2017 when she was 21.

It is a raw and intimate portrait of his struggle to cope with her loss and the film highlights the huge importance of support that is needed for young adults, as a distinct group within society, who have suffered a bereavement.

Learning to Grieve opens with photos of Harriet Shelley alone and then with her brother George with voice over by George saying “a year ago today my life changed….a year ago today a lot of people’s lives changed”.

Then this is followed by footage from an X-factor audition in which the then 18 year-old graphic design student George Shelley shows his talent and huge potential as a singer. The result of his appearance in the competition was for him to join a boy band, who were also in X-Factor, to form Union J and from there he was catapulted into performing around the world in a crazy whirlwind of fame and fortune.

It seems that his sister Harriet was a hugely important confidant during that period of rapid change and that she was someone who helped him to feel grounded in reality. To camera, George says “and then in Spring of 2017 my life completely flipped upside down…my sister Harriet passed away… it was like someone just turned all the lights off in my head”.

George goes on to describe how quickly he cut off from everyone and everything in his life, shutting himself away in his bedroom and entering a “very dark place”. In the film he discusses this period of time with his flat mate Emily, also a close friend of Harriet’s, who admits just how worried she was about George in those early months of his bereavement when suicide seemed to be a genuine fear she had for him. George is able to articulate now how impossible it was for him to acknowledge his pain, to speak of his loss or to discuss his way forward through this darkness.

His personal recovery is aided initially by a graphic design project using sound and image to express his feelings of loss. He next visits Harriet’s grave with his Mum and grandmother and hears how his mother is coping with her grief.

George recognises that talking about his feelings is an essential goal and sets out to explore how other young people have coped with similar pain. He visits Beth Rowland, a 23 year-old who lost her mother to cancer when she was only 20.

Beth shows George the scrapbook of photos she made in order to remember and honour her mother. But then goes on to talk about the blog she started to write concerning her experience of grieving, which has since grown in to a significant on-line resource. After this encounter, George is able to return to song writing for the first time since his bereavement with a beautiful song about his loss, which he performs to camera.

George next visits his father in Nottingham, with whom he has had less contact as a consequence of his parents’ separation when he was only 4 years old. Sadly, his father who was a criminal barrister had suffered a serious motorcycle accident 2 years earlier resulting in a brain injury as well as significant physical disabilities affecting his left arm.

George struggles to understand how the additional stress of Harriet’s death must have impacted on his father. Their mutual loss has brought them together for a painfully frank discussion.

George then chooses to join a group on retreat in a beautiful setting, who are brought together by the shared loss of a sibling. They are all engaged in doing a creative activity related to their dead sibling while they talk about their feelings. In the group discussion, George is very articulate and acknowledges that he was unable to properly say Harriet’s name for about 5 months after her death.

He is amazed that someone is there only 4 months after her bereavement. This makes the point that everyone grieves in his or her own way and to his or her own timetable. He finds this group incredibly helpful and freeing. On a return visit to his Mum, she gives him Harriet’s last diary, provoking tears and deep sadness on seeing her handwriting. However, he knows that he is feeling better since he has been able to talk more openly about his feelings.

George then reveals that he struggled for years with coming out publicly about his sexuality. He is gay and says that his sister had been the only person he could share this with through the many years he performed in Union J. When seeing a psychiatrist after his sister’s death, George was helped to link this additional stress with his difficulties in grieving.

As George’s recovery shows positive signs of progress, he begins to plan his first performance since Harriet’s death, in July 2018 at London Pride. His appearance brings the film to a perfect conclusion although it leaves you with the real sense that grief is always a ‘work in progress’ and that George will forever be changed by the events that shattered his life so suddenly in May 2017.

Learning to Grieve is an important film to watch for anyone seeking a better understanding of grief, especially in young men, who are so often burdened by a reluctance and an inability to talk openly about their feelings.

In his visit with Beth Rowland, George discovers that this is not an uncommon problem for young adults. Beth’s blog which has since become a significant resource for those aged 16-30 who have suffered a bereavement, is called Let’s Talk About Loss (Beth describes it as a safe space to talk through taboos and address the reality of losing someone close to you when you are young) and it offers a significant support network for young people struggling to cope with loss.

Usefully for mental health professionals, George’s personal recovery story is documented brilliantly and unsurprisingly features the support he finds through music and the visual arts as they enable him to engage positively with processing his deeply felt sadness. He describes his depression as causing a desaturation of colour in his life and it is only when he starts to experience vibrant colours again that he is able to take the first major step forward.

This involves him starting a graphic design project using digital images with sound elements to capture how he is feeling. He calls the project Window into Mind and says that it helped him to communicate what it was like dealing with his loss in an audio-visual medium. Indeed, it also becomes clear that the creative act of making this documentary has been of huge therapeutic benefit to George. This highlights the hugely important role that the creative arts have to play in managing feelings of loss, especially in younger adults.

With the stark statistics stated at the close of the film that 1 in 29 children (aged 5 to 16) have experienced the loss of a parent or sibling in the UK and a quarter of people under 24 who take their own lives have suffered a bereavement, Learning to Grieve is a valuable, sensitively made documentary film offering a significant learning resource for anyone working as a health professional.