Today marks the NHS’s 72nd birthday. As the UK emerges from the first throes of COVID we have never felt so strongly about protecting the NHS and showing our love.

But love should not blind us to its faults. The horrific impact of racism across society has been exposed starkly by the COVID pandemic and by the killing of George Floyd which has led to the growth of the Black Lives Matter movement.

Racism pervades all aspects of our society. Every person and every institution is touched by it, including those which we hold most dear. Yes, even our beloved NHS is not immune.  Racism is its most pervasive and shameful secret.

In the United Kingdom, Black women are five times more likely to die in childbirth than white women.

You are more likely to experience poorer cancer care if you are not white.

When it comes to mental illness injustices are added to layer by layer.

Because of racism and multiple socioeconomic disadvantages, Black people have worse mental health. They are more likely to attract diagnoses of severe mental illness yet are half as likely to get treatment for their mental health problems than white people. And when they do, they have far poorer outcomes. Black people are four times more likely than white peers to be detained under the Mental Health Act.

This is all too familiar, I have worked as a psychiatrist in the NHS for over 27 years.

A few years ago, I referred a young man for psychological treatment. I’d met him following a suicide attempt. He was severely depressed, almost catatonic. It took weeks to get him better. During that time we had many conversations about his life which had been dogged by parental abandonment and indifference.

A highly intelligent and emotionally able man, he had managed university on a full grant and worked  in a managerial position. His ability to reflect on our discussions and slowly change his outlook was remarkable but he was held back by his past trauma. A sure candidate for talking-therapy.

It was a surprise when he was turned down. “It’s just that we didn’t think he was psychologically minded enough…we didn’t feel he could cope with the dynamic process”

I was amazed that someone so emotionally astute could be rejected. I even checked that they hadn’t mixed patients up. They hadn’t. But he was Black.

I currently work in forensic psychiatry. Many of our patients are Black or from minority ethnic backgrounds.

When I met Mo, he’d been a scholarship student with an array of top grades. In sixth form, this stellar student’s academic work dropped off a cliff. He became depressed and withdrawn. He was asked to leave the school before his A-levels and spent two years at home.

Mo’s GP referred him to local mental health services. He was assessed by a junior practitioner who totally missed his severe mental health problem and discharged him. She found him a “little odd” but felt this was probably “in keeping with his cultural background”.

I assessed Mo months later. He was in prison. He had been manic and psychotic for some time and was arrested for exposure and committing a lewd act.

The young man, who only a few years earlier was a would-be doctor or lawyer, was now a forensic mental health patient. A tragedy for Mo and his family, at significant cost to the state.

My profession has debated racism for years and is now on track to making changes.  The Royal College of Psychiatrists was the first medical college to issue a statement recognising the deep impact of structural racism on individuals’ lives, when this was not in vogue.

The College responded, before other national bodies, to evidence that systemic racism contributed to the disproportionate COVID death rate among Black, Asian and minority ethnic NHS staff – these staff were less likely to complain about inadequate protective equipment and less likely to be given it.  The tool developed by the College sets out practical, easily implemented steps to assess and minimise Black, Asian and minority ethnic staff risks.

RCPsych’s new president, Dr Adrian James, has made combatting racism and inequalities his top priority, which includes the appointment of myself and Dr Rajesh Mohan as leads on race equality.

I’m proud to have driven a number of initiatives including the Patient and Carers’ Race Equality Framework that shows organisations how to identity steps to make improvements to make a radical difference to the way that Black, Asian and minority ethnic people access and experience mental health services.

Our message is clear. Enough talk, time for action.

Many of the steps required to make a difference are known.  It’s time to take them.

It goes without saying that I will be out later for the big NHS birthday clap and encourage anyone reading to join.  But love for the NHS can no longer be blind.

The NHS cannot be delivering a quality service if only a certain group of people have the best outcomes. At 72, the NHS is as old as many grandparents, but that’s no excuse for perpetuating hierarchies and inequalities.  It’s time to inject different ideas: there can be no quality without equality. 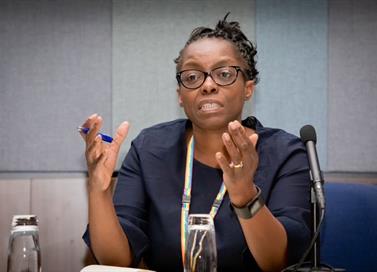