by Dr Claire Hilton, Historian in Residence at the Royal College of Psychiatrists.

One of the most interesting projects I have contributed to in my role as historian in residence at the RCPsych, is an episode of the BBC2 documentary series A House Through Time. The series explores the biography of a house and its occupants over the centuries. The producers came to the RCPsych because they wanted to know more about the mental health of William Henry Martin (c.1849-87), who had lived in the house in Bristol that is being featured in the 2020 series.

William Martin was the oldest of six children. Four of his siblings died in infancy, and his one surviving brother, Arthur, was “rather delicate”. After his father died, his mother, Jane, married George Slader.

Despite having health problems from a young age, he was sufficiently well educated to become a school master, and, as we shall see, to quote Latin texts. His family would have had expectations of a bright future for him: being a school master was a career with potential, which could give him a place among the new middle class. But, in his 20s, William was admitted to a private mental hospital and then to a public lunatic asylum.

This blog is longer than usual because it outlines William’s medical and psychiatric background, and some of the associated social, scientific and professional issues, about which people may be curious when they watch the episode. The clinical material for this blog comes from the medical records of his admissions to Wonford House Hospital (1874-76) and to Bristol Lunatic Asylum (1876-87) (held at the Devon Archives, Exeter and the Bristol Archives, Bristol, respectively).

From childhood, William suffered from scrofula, a chronic disorder which destroys the lymph nodes in the neck creating pus which tracks its way to the skin to discharge. When the lesions heal they leave scars, permanently indicating the individual’s “scrofulous disposition” (Fig 1). In the mid-19th century, scrofula was known to be related to tuberculosis. Both conditions were known to run in families, so were thought to be hereditary or “constitutional” (Family Physician, pp.46, 57). Only after Robert Koch identified mycobacterium tuberculosis in 1882 was scrofula shown to be almost always caused by the same microorganism as tuberculosis.

When no clear physical cause for an illness could be identified, scientists and clinicians pondered over the relative effects of heredity and social factors. This was influenced by prevailing and valued scientific theories at the time. Influential “science” underpinning the debate related to Bénédict Morel’s theory of “degeneration” (1850s) and Charles Darwin’s On the Origin of Species (1859). Darwin’s evolutionary, survival of the fittest elucidation is well known and has continued into modern-day science. Morel’s degeneration theory was the converse of Darwin’s model. It proposed that many so called “constitutional” disorders, which clustered in families, were associated with progressive social, mental and physical degeneration over a few generations until the line died out. Many well-educated people, including psychiatrists such as Henry Maudsley, concurred with the degeneration theory. Other intellects, such as social scientist Benjamin Seebohm Rowntree (1908, p.303), challenged it; he attributed many of the same health-related conditions to poverty and deprivation.

From around the age of 20, William’s family were increasingly concerned by his disturbed and “odd” behaviours. After several years of declining mental health, he was admitted to Wonford House Hospital, a private asylum. He showed no signs of improvement during his two-year admission. When the family resources were insufficient to maintain him there, he was discharged back to the care of Jane and George.

At home, William’s behaviours became increasingly disturbed, including trying to “destroy himself” and threatening to injure Jane and others. After a few months at home he was admitted to Bristol Lunatic Asylum. The stigma of lunacy and “certification” to a public asylum under the Lunacy Act 1845 was further aggravated by the automatic designation of the patient as a “pauper lunatic”. The word “pauper” was tainted with connotations of disgrace, Poor Law, destitution and workhouses. William and his family were not destitute. The term was employed to acknowledge that Poor Law Boards of Guardians were responsible for asylum fees for patients admitted from their parishes. However, the Guardians would demand means-tested contributions from the many families who were not impoverished, to help pay for a patient’s care and treatment.

William experienced auditory hallucinations, including voices from the clouds. The voices often distressed him but could also be reassuring: “we will comfort you”. They were said to “prompt words to his mind” and at times they influenced the course of his actions and activities. This may have been associated with staff perceiving him as obstinate, associated with an unpleasant incident when he sustained a black eye during a “scuffle” with a ward attendant. There were no specific medications for his hallucinations or disturbed thoughts. From time to time he received sedatives, either potassium bromide or chloral hydrate (the latter still listed in the British National Formulary). He was also prescribed iron, cod liver oil, wine, beer, and brandy with water. His notes sometimes reported a little improvement, but he was usually physically feeble and mentally disturbed.

While in the asylum, William wrote to Queen Victoria. The letter was grandiose, mentioning for example, that he needed his own “establishment” “to defend this world from harm”. The letter was strangely worded, and parts were impossible to follow, such as, “I am sorry for “poor” Cousins and should like them released from this Asylum as many of them had Command in Heaven” (Fig 2). He asked the Queen to secure his release, as he was “Mens sana in corpore sano” (a sane mind in a sane body). He concluded his letter “Unity is Strength, Yours Ever Affectionately, The Great Eternity, WR Martin” (Fig 3). The asylum intercepted the letter, and it remained in his medical notes. 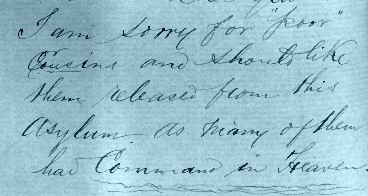 While a patient, William was given opportunities for socialising and employment, for as long as his health permitted. The ward staff encouraged him to play the piano, join in playing billiards with other patients, and participate in walks and other social activities. He helped put up Christmas decorations (Fig 4) and worked with the asylum painters and decorators, including stencilling designs on the walls. 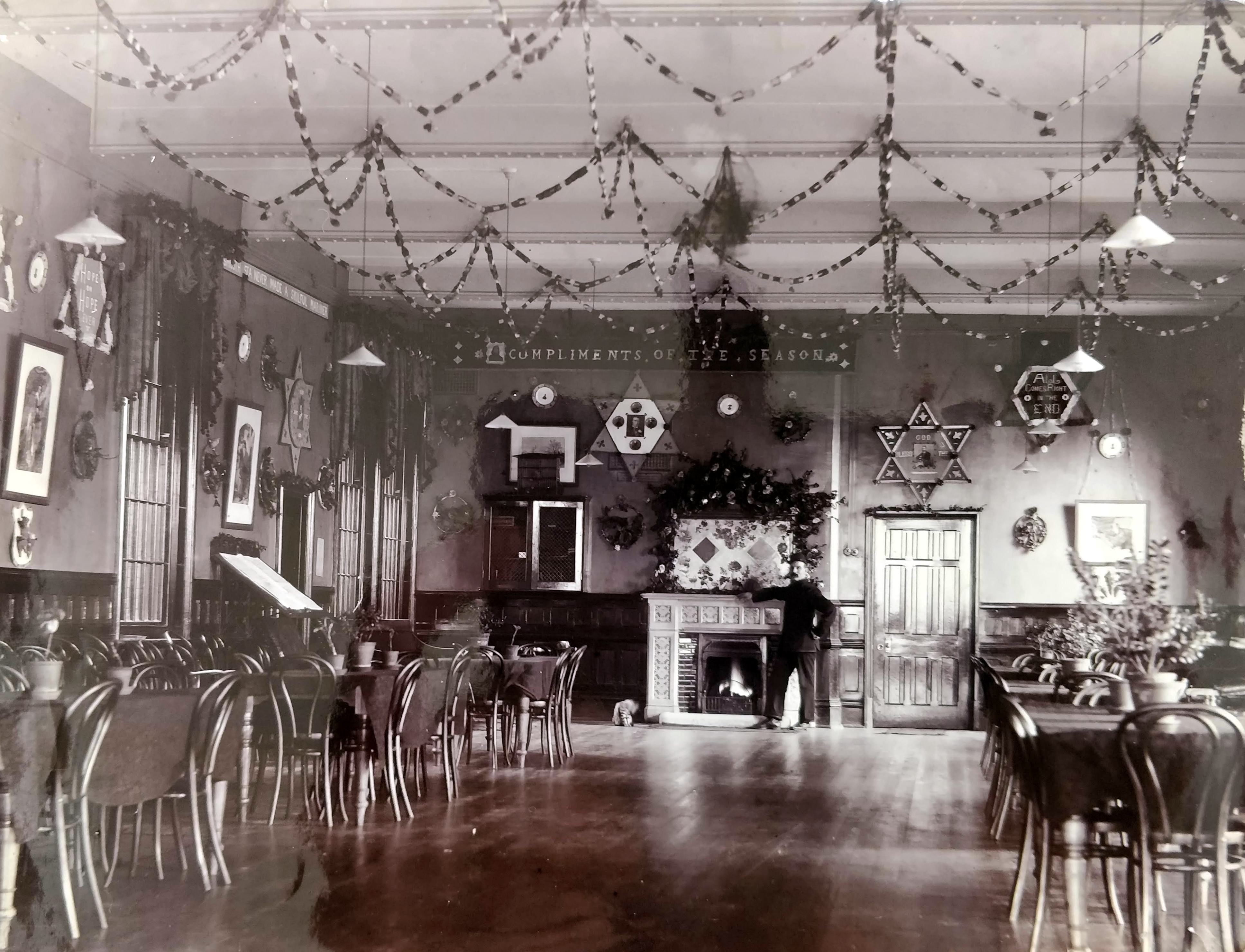 William died in the asylum in 1887, age 38. He developed tuberculosis of the hip, probably related to his previous scrofula. He suffered from discharging “cold” abscesses and worsening debility over several months. He became bed bound and had “bed-sores” (today called “pressure ulcers”). As today, in the 19th century “bed-sores” were known to be preventable and were considered “a disgrace to a nurse … [who] … should question herself very closely as to whether or no it is in anyway attributable to neglect or want of knowledge on her part” (Family Physician p.643).

William’s notes do not give a diagnosis. It was more common to document the form of a disorder and its presumed causes. His notes, however, mention “melancholia” and “delusional insanity”. Melancholia in this context was probably used non-specifically, probably to mean quiet, withdrawn and unsociable. The term delusional insanity was mentioned after he wrote to Queen Victoria. His writing demonstrated “thought disorder” of the sort suggestive of a psychotic disorder.

It is rare to have as much information on an asylum patient, including some in the patient’s own words, as we have for William Martin. Nevertheless, making a detailed “retrospective diagnosis” using today’s psychiatric disorder diagnostic classifications is fraught with philosophical, medical and pathological complications. This is partly due to the amount of information available, the difficulty of precisely interpreting past language and concepts, and the temptation to assume that today’s classifications and terminology are correct, which is unlikely as they continue to evolve as knowledge changes.

If William walked into a general practitioner’s surgery or a psychiatric clinic today, the doctor might think about schizophrenia, but, in view of his poor physical health, would probably also want him to have a thorough physical assessment. Two well-known Victorian psychiatrists, John Bucknill and Daniel Hack Tuke (1874, p.382-384), may have considered likewise. In their day, before the discovery of mycobacterium tuberculosis, one of the disease categories they used was Tubercular Insanity, when symptoms of both began around the same time. They commented that the psychiatric disorder was often cut short by death from tuberculosis. Tubercular Insanity fits conveniently with degeneration theory, providing a single constitutional explanation for multiple symptoms. It also indicates the sort of challenges faced by the asylum doctors, to identify causes and treat mixtures of physical and psychiatric symptoms.

Perhaps more important than William’s precise diagnosis are the social factors around his admissions. Some influential historians, such as Michel Foucault and Andrew Scull, have argued that asylums were a means of segregating disturbed and unwanted people away from the rest of society, to contain rather than cure them, part of a system for managing economically unproductive people. This does not fit well with William’s story. His family were concerned about him. Jane and George tried their best to support him. For as long as possible the family strived to keep him in a private asylum at their own expense. His disturbed and threatening behaviours made it impossible for them to care for him at home. Contrary to generalisations in the history books that families dumped their unwanted, disturbed relatives in asylums, William’s story provides evidence of a family’s concern and compassion when faced with awful choices and incurable mental and physical illness.

I am grateful to Fiona Watson, librarian at the RCPsych, for her advice, and to Matt Coles, archivist at Bristol Archives for permission to reproduce excerpts from William Martin’s letter.

Byrom Bramwell, Atlas of Clinical Medicine (T and A Constable, 1892)

John Bucknill and Daniel Hack Tuke, A Manual of Psychological Medicine (J and A Churchill, 1874)

Physicians and Surgeons at the Principal London Hospitals, The Family Physician (Cassell and Co, 1882)

Andrew Scull, The Most Solitary of Afflictions: Madness and society in Britain 1700–1900 (Yale University Press, 1993)