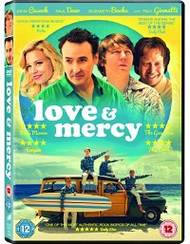 Love & Mercy, directed by Bill Pohlad, was released in the USA in June 2015.

The film is a biopic of the life of Brian Wilson, the highly creative and talented musical force behind The Beach Boys, whose mental health deteriorated in the mid 1960s as the group produced their Pet Sounds album.

The film uses two different actors to play Wilson - Paul Dano as the younger man and John Cusack as the older - allowing the film to span a significant portion of his life with a clear distinction between ‘before’ and ‘after’ the onset of his mental illness.

Love and Mercy shows the signs and symptoms of his developing mental illness and also examines the treatment he received from psychologist Dr Eugene Landy. Of particular interest is that Wilson was involved in the making of Love and Mercy and when asked in an interview for Rolling Stone, in June 2015, (Brian Wilson’s Better Days by Jason Fine) about how he felt on seeing the film, responded, “It was hard to watch the first time," Wilson admits. "I felt exposed. But it's a factual film. Whatever the film shows, it was much worse in real life."

Love & Mercy opens with the young Brian Wilson trying to compose some music, talking aloud to himself as he wonders what would happen if he were to lose that ability.

The film then flashes forward to the older Brian in a car salesroom wanting to buy a Cadillac from sales assistant Melinda Ledbetter. They sit in a car together and he writes on a card for her the words ‘Lonely, Scared, Frightened’, which she only reads when he has left the showroom.

After a short time alone in the car Brian’s minders join them and Melinda learns the identity of her slightly strange customer. The film proceeds to cut between scenes from Brian’s twenties, composing and recording songs with The Beach Boys, and scenes in his later life when he was under the total control of therapist Eugene Landy. His increasing attraction to Melinda, who Landy initially permits him to ‘date’ for a while, appears to awaken something in him.

In the earlier time frame, Brain’s relationship with his father is portrayed as very difficult, and several characters refer to the beatings the father gave all of the brothers when they were children.

His father seems to be struggling with his own feelings of depression and is locked in a critical, competitive musical battle with Brian, his most sensitive son. After Brian suffers a panic attack on a flight home from a concert he asks to stay at home and compose rather than join the band on tour. His brothers and cousin reluctantly agree.

It is then that Brian experiences the first symptoms of his psychotic illness, and soon after that, he attempts to ‘clear his head’ by taking LSD. He begins to compose songs that are sadder and more complex in their composition, much to the dismay of his cousin in particular.

His symptoms worsen steadily and are particularly acute in a scene in the swimming pool at his home where the band are meeting to discuss their musical direction. Brian’s paranoia is revealed then when he states that Phil Spector is bugging the house and insists on having a discussion in the deep end of the pool because he believes that it is the only safe place to be.

Despite this behaviour, which must be taken in the context of the ‘psychedelic sixties’ in Los Angeles, only one brother actually expresses real concern about his mental state at this time, perhaps explaining why alcohol and drugs initially became the means to self medication, rather than obtaining formal psychiatric help.

The later life story proceeds with the chilling depiction of Landy’s total control over Brian’s life, especially as the relationship with Melinda starts to deepen. She is warned off by Landy and subsequently resolves to free Brian when he pleads with her to help him, whilst also revealing to her that he hears voices.

Melinda contacts Brian’s brother Carl, providing him with some written evidence of the abusive relationship Landy has developed with Brian, resulting in a successful lawsuit which prevents Landy from having any contact with Brian.

This paves the way for Brian’s relationship with Melinda to develop romantically. The film closes with the real Brian Wilson performing the title track to the film, which he composed, called ‘Love & Mercy’.

Love & Mercy is a film about living with mental illness (Brian Wilson was finally diagnosed with schizoaffective disorder). It is a biography of great relevance to mental health professionals, as Wilson’s story gives a sense of the tensions in the relationship with his bullying father, the delayed diagnosis of his psychosis, his self-medication with illicit drugs and alcohol, unorthodox treatment with a controlling therapist and his eventual improvement aided by the support and love of the woman who uncovers the abuse and eventually becomes his second wife.

As such, the film invites the viewer to consider all of the factors that may have played a part in the genesis and course of Wilson’s psychotic disorder. In an interview for ABILITY magazine in 2006, he discussed in some detail the symptoms of his schizoaffective illness, including auditory hallucinations, extreme anxiety, depression and paranoia, which he began to experience at the age of 25. Wilson states that he suffered these symptoms for 15 years before seeking professional help, using cocaine and heroin in an attempt to manage them.

There is a leaflet on schizoaffective disorder at the Royal College of Psychiatrists website that provides a helpful overview of the condition. There is also a good account of the historical development of the concept in an article written by David J. Castle in Advances in Psychiatric Treatment Jan 2012, 18 (1) 32-33, called Schizoaffective disorder.

The psychologist, Eugene Landy, that Wilson consulted was pioneering a model of care called ’24 hour therapy’, which involved taking complete control of the life of the person concerned. However, this practice fell short of acceptable professional standards when it included controlling and varying the administration of the drugs prescribed by Wilson’s psychiatrist, controlling who Wilson could see at any particular time and in the ultimate conflict of interests, appointing himself as Wilson’s business manager and executive producer.

Melinda Ledbetter and Wilson’s family became increasingly concerned by the hold Landy had on him and they finally took legal steps to end the relationship. As a result, Landy lost his license to practice Psychology in California in1989.

This aspect of the film has particular relevance to mental health professionals, as it offers an opportunity to consider how vulnerable mental illness can make people and how important it is to safeguard those individuals who may lack the mental capacity to make important life decisions for themselves at any particular point in their life. For further information on the UK policy on safeguarding, visit the UK government website and search for the policy document entitled Safeguarding policy: protecting vulnerable adults (available to download from The Office of Public Guardian).

Now 73, Wilson states that he continues to hear derogatory voices but battles with them more successfully to block them out, especially when he is performing.

It seems that his mental state continues to fluctuate but that any depressive episodes are usually noticed and dealt with quickly with the support of his wife, Melinda.

He takes long-term medication and believes that his wife and family plays a very important part in the maintenance of his mental stability such that he is able to engage actively and successfully in the world of music again.

Additionally, Love & Mercy has a superb soundtrack, which reproduces many of The Beach Boys’ famous tracks and portrays the recording processes in fascinating detail.

For anyone interested in understanding Wilson’s particular musical ability there is an informative blog entitled Was musical memory the secret to Brian Wilson’s genius?, by Victoria Williamson, vice chancellor’s fellow for music at the University of Sheffield, published in The Guardian newspaper in January 2016. In the blog Williamson explores whether Wilson’s musical talent may be related to the fact that he hears musical phrases playing constantly in his head. This rare phenomenon becomes even more interesting when considering that he suffers from persistent auditory hallucinations of a derogatory nature, which first started to appear entangled with musical phrases, as depicted in the film.

This is a powerfully moving film about a life lived with a psychotic illness that offers any mental health professional the opportunity to enhance their empathic understanding of how it feels to suffer from such a condition.

• More information about Love & Mercy can be found at IMDB, where a short trailer can be viewed.