These past three months have been challenging for many. Members of the public have had to experience a period of self-isolation in order to protect themselves and others from becoming unwell with Covid-19. Speaking as a junior doctor, not being able to physically see my family has been difficult, though I do consider myself fortunate to have maintained social interaction through my clinical work.

Over the last few weeks I have found my sleep regularly interrupted by nightmares, most of which revolve around the loss of loved ones; from speaking to colleagues it would seem that I am not alone in this. Between the disturbing dreams and the weeks spent in my bedroom, I was reminded of an indie game I first played over a decade ago called Yume Nikki (Japanese for ‘Dream Diary’), a game many speculate is about a girl who is ‘Hikikomori’: a Japanese term used by mental health professionals to refer to individuals experiencing prolonged social isolation in their own home, along with significant functional impairment or distress.

While Hikikomori has not been mentioned in any international diagnostic manuals for mental health, it has been the subject of a growing amount of clinical research around the world, sparked by concerns about its increasing prevalence in the Japanese population.

Isolation is a major theme of the 2004 cult-classic Yume Nikki. Upon starting the game, players find themselves isolated within a single apartment room and balcony, as protagonist Madotsuki (‘windowed’) will shake her head in refusal upon any of the player’s attempts to interact with the front door. 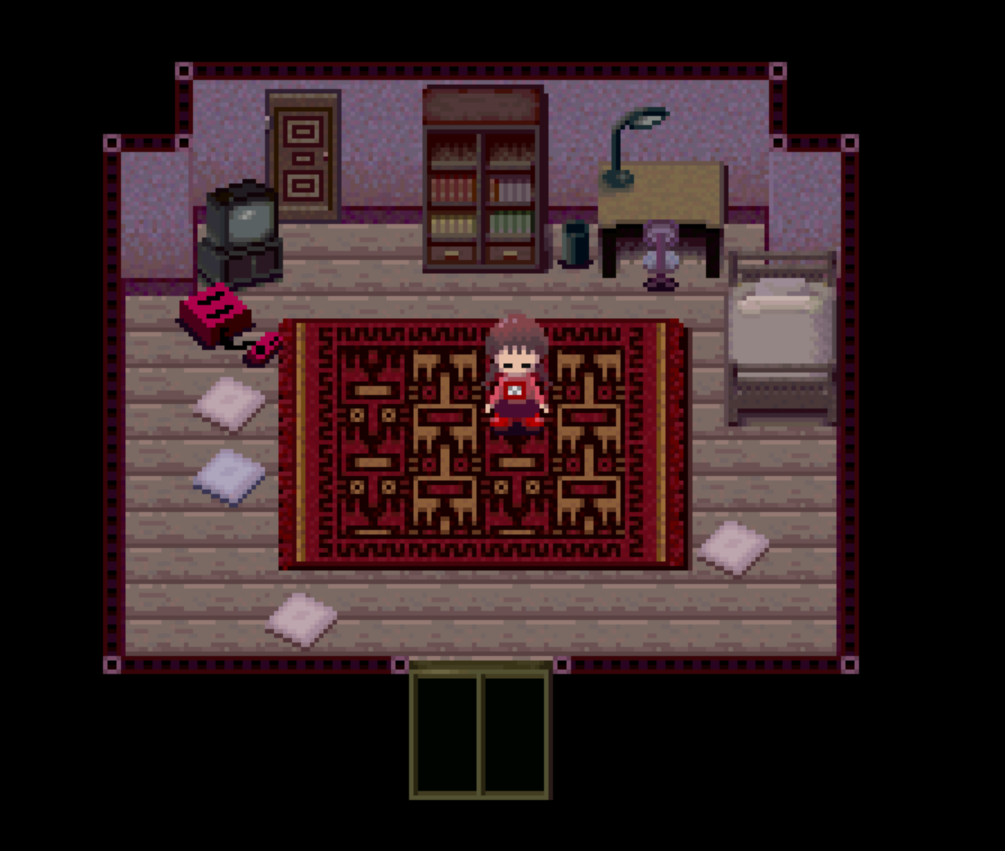 Madotsuki is unable to leave her bedroom. Many players suspect that this is because she is ‘Hikikomori’

Exploration of Madotsuki’s room reveals little to do beyond playing a simple and repetitive mini game on a retro game console, interacting with a television which displays no channels, or saving progress in a diary. Given the lack of enjoyable options to pass the time, perhaps it is no surprise that going to bed offers an appealing alternative, which is when Madotsuki begins to dream. Each dream begins in Madotsuki’s apartment, which appears similar to its waking world equivalent, aside from one important aspect: Madotsuki is able to leave through the front door. 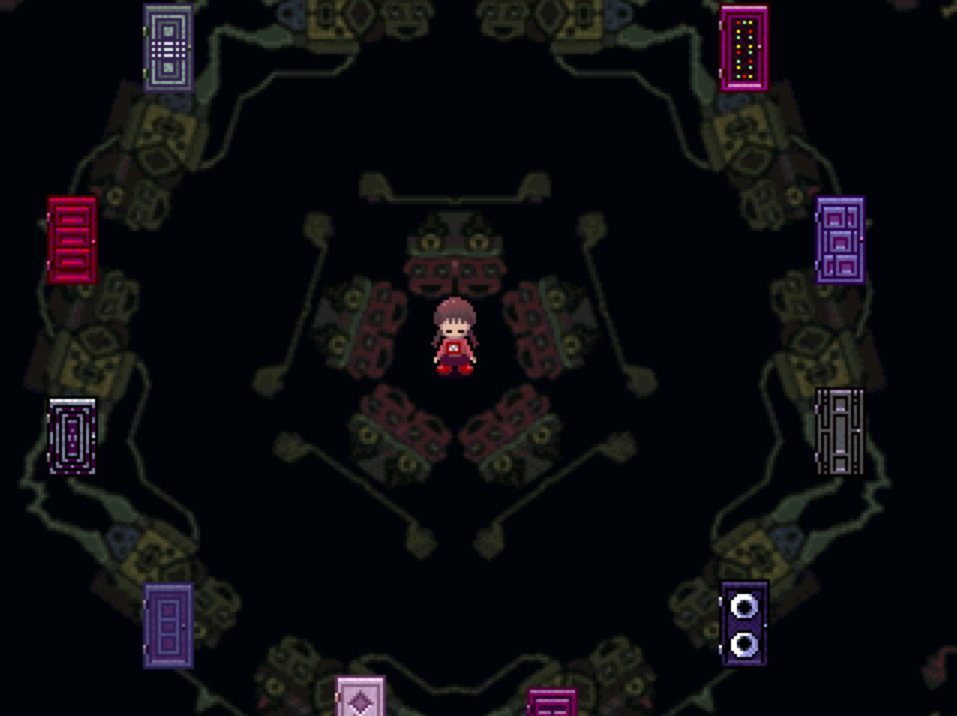 The dream nexus offers Madotsuki numerous paths behind many doors, though most ultimately loop back to this location

Leaving the dream apartment brings players to an eerie nexus with a circle of a dozen uniquely-decorated doors, each leading to a different ‘world’. These locations are all interconnected but remain distinct from each other, with designs ranging from a minimalistic field of snow with interspersed trees, to a phantasmagorical space where the walls are covered in zippers, legs and arms. Regardless, the atmosphere throughout is one of unease and confusion.

The worlds are vast and labyrinthine, replete with unsettling, otherworldly imagery, and accompanied by a haunting soundtrack. Abstract symbols that may or may not mean something are sprinkled throughout the worlds alongside random occurrences such as a ghost face with a 1-in-64 chance of appearing every time a certain light switch is flipped. 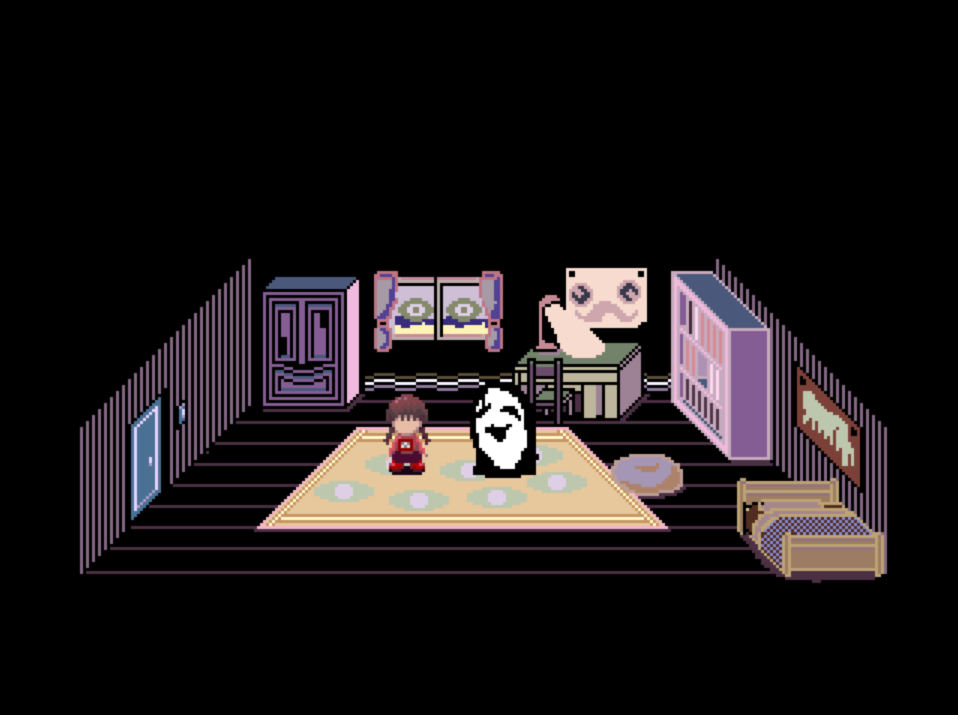 A faceless Madotsuki encounters the random face in the dark ‘Uboa’, named by fans for the scream they often elicit

Indeed, unlike most games that assure the player how the game “should” be played, Yume Nikki stands out with a sheer absence of dialogue throughout. Players find themselves cast suddenly into a strange and unfamiliar dream world, with nothing but their own speculations for company. Anxiety and disorientation are inevitable as one wanders this illogical realm, feelings arguably not dissimilar to those brought about by prolonged isolation.

The mystery in the game

Even the game’s elusive creator “Kikiyama”, who has kept their true identity a mystery, has remained doggedly silent on the validity of the many fan theories and interpretations of what Yume Nikki means. Some fans have questioned whether or not Kikiyama is Hikikomori and if Kikiyama drew upon their own personal experience of isolation when making this game. 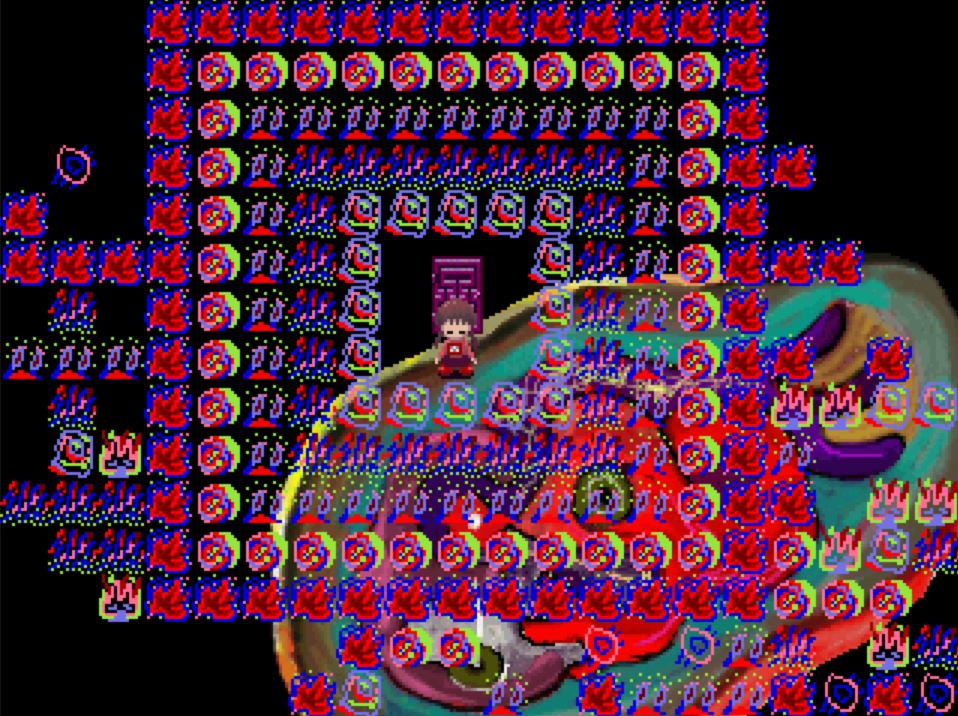 Psychedelic backdrops float past, giving the impression of an ever-changing dreamscape

The surreal characters that populate the game world do nothing to allay the player’s unease. Wandering around aimlessly without hints to their origin or motive, these creatures either ignore Madotsuki upon her attempts to interact with them, or turn towards her and make incomprehensible noises. Even in the one instance when she comes across a party of beaked humanoids who appear to be having a good time at a picnic accompanied by cheerful music, Madotsuki is able only to watch from a distance, due to plants blocking her approach.

Some wonder if these events are symbolic of Madotsuki’s real-life predicaments – in this case, perhaps representative of her deliberate social exclusion by unsympathetic individuals. Given that these avian adversaries may also chase Madotsuki and attempt to trap her in enclosed spaces in certain dream areas, one wonders if she may be a victim of bullying. Research about Hikikomori has suggested that intense social pressures brought about by adverse experiences like bullying can contribute to the isolation of such individuals (Teo et al., 2015), with a significantly increased risk of dropping out of education (Yong & Nomura, 2019). 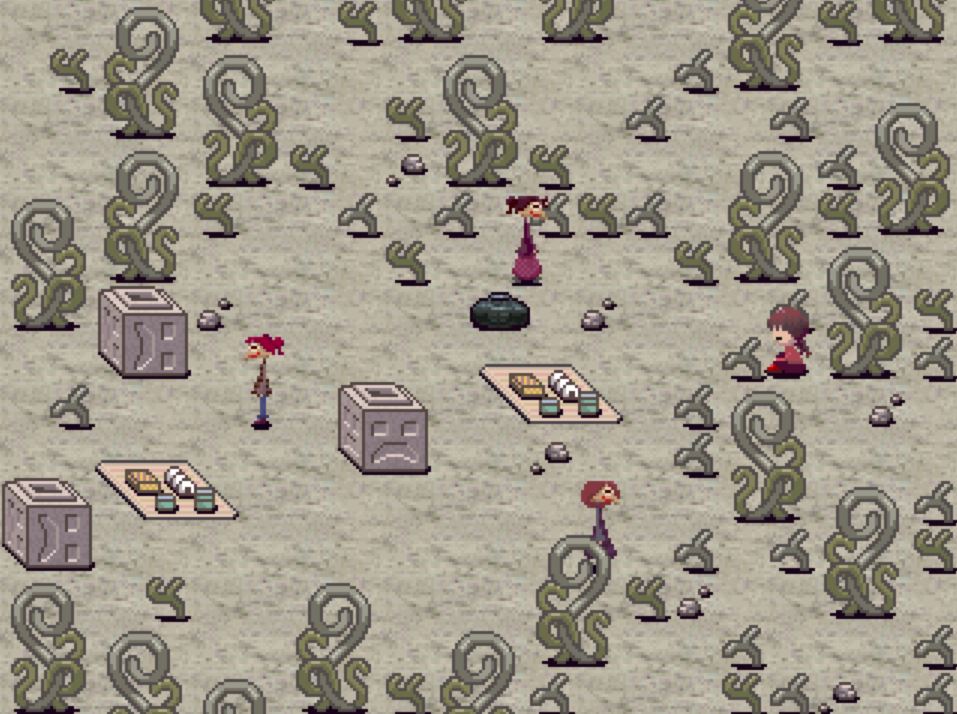 Madotsuki watches the party from afar, her path obstructed by twisted vegetation

Madotsuki may make use of various “effects” within the game. Found only after painstaking exploration of the dream worlds, these effects can change Madotsuki’s appearance or behaviour in various ways, some quite bizarre. This is another puzzling aspect of the game, as players are left wondering the significance of, say, being able to light Madotsuki up in bright neon colours, or having her play a flute.

Some players speculate as to whether transformational effects, such as the ability to “fatten” Madotsuki, or change her into a faceless ghost, may hint at underlying disturbed body image, or issues with self-esteem. Comorbidity of hikikomori with other mental illness is particularly common (Tan et al., 2020).

Perhaps more unsettling is the “knife” effect, which, when equipped, will cause many characters to flee Madotsuki, whilst immobile characters start shuffling around in a seemingly panicked manner. Players may, if they choose, attack these characters with the knife and even kill them to obtain coins. These coins can be used to increase player health at vending machines, but there is no reason to do this, as much like in a dream it is not actually possible to get hurt.

The game gives no overt sign of whether you are doing the “right” thing or not and players are kept ruminating as to the meaning of their actions and their possible consequences. In fact, one does not need to use the knife at all when completing Yume Nikki. Regardless of their meaning, much like the game’s environments, these effects are confusing and unsettling. 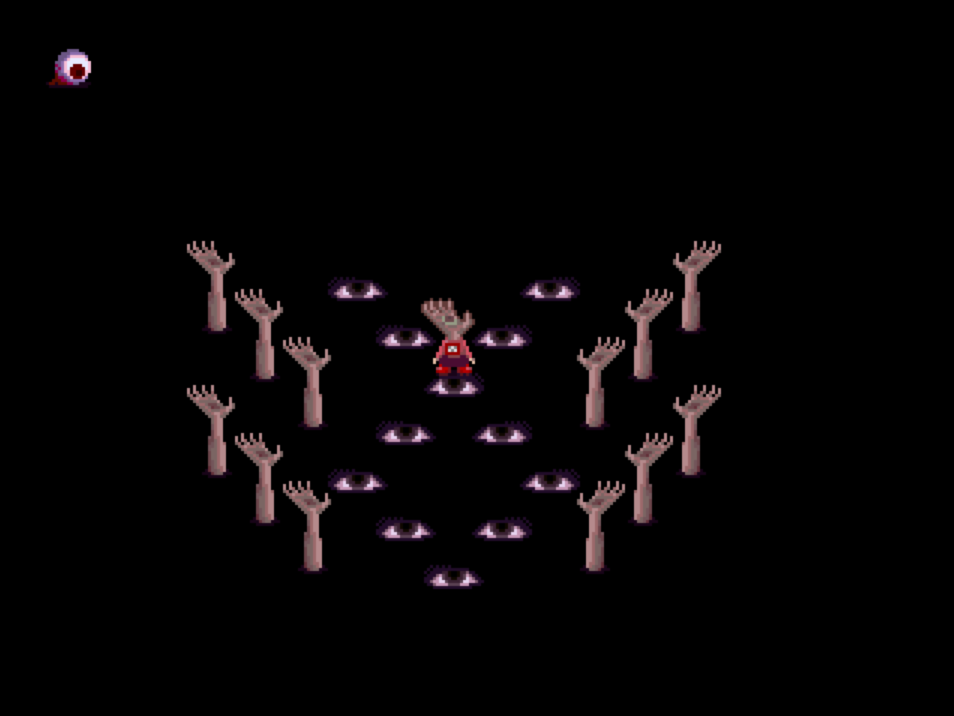 Watchful eyes sprawled throughout certain areas evoke a sense of paranoia, whilst outstretched arms almost seem to suggest a feeling of helplessness

The player reaches the game’s ending by collecting all 24 effects. Regardless of how the player chooses to play the game, the end is always the same: Madotsuki wakes from her dream and is now able to interact with a set of stairs which have appeared on her balcony, which she then climbs before jumping over the edge, seemingly to her death.

This ending is devastating and comes as a shock to many players who may have developed an appreciation for the silent protagonist. As abrupt and upsetting as the ending may be, it does, intentionally or not, reflect that individuals who are Hikikomori are vulnerable in that they are more likely to have risk factors for suicide (Yong & Nomura, 2019). Some fans argue whether this death occurs in the waking world or is just another dream, which may indicate their difficulty in accepting such an upsetting outcome. 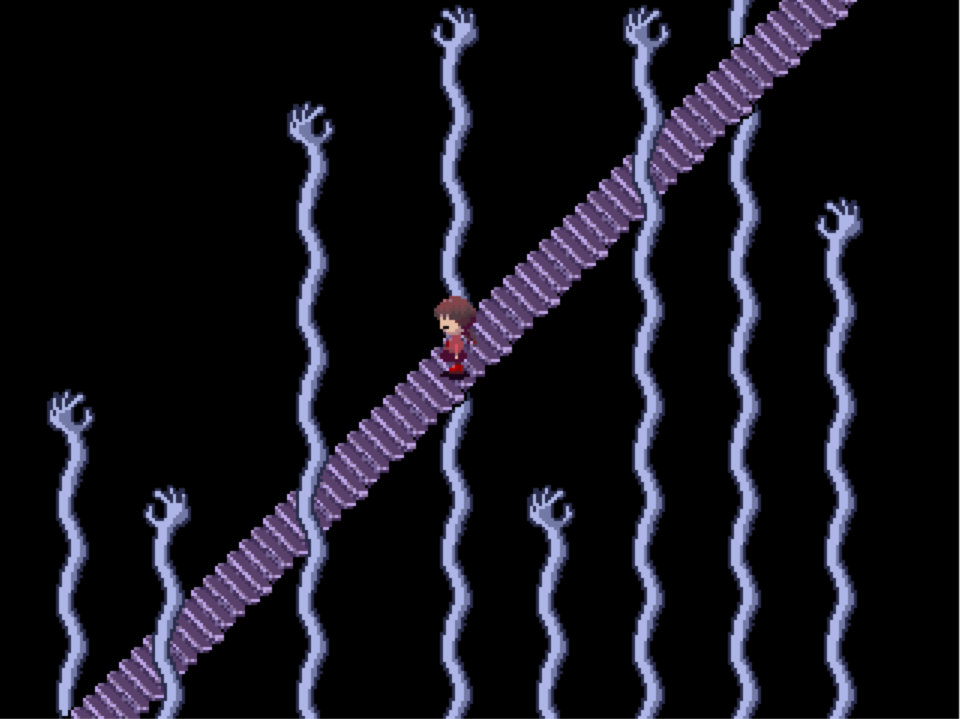 Descending deeper into the dream, imagery becomes visibly more disconcerting. It is hard not to feel concerned for Madotsuki

The overall picture Yume Nikki paints is extremely bleak: a young girl stuck in her room, unable to access support, with nothing but a dream world for company that turns increasingly hostile towards her, and yet conquering the dream leads only to her apparent demise.

Whilst Madotsuki’s self-imposed confinement is believed to be indicative of her status as Hikikomori, it is important to note that Hikikomori has a strict set of diagnostic criteria in Japan (Kato et al., 2020) – including a minimum duration of 6 months and associated functional impairment - and it is debatable whether Madotsuki’s presentation meets these.

Of course, isolation can be a positive experience for some, but it is difficult to imagine how being left with only your own thoughts for company for such a long period of time can remain a positive experience. While research on the subjective experience of Hikikomori has yet to occur, it could perhaps be argued that the distress that the player is forced to experience through the game can feel particularly reminiscent of the struggles of the Hikikomori condition – from the endless ruminating thoughts about unanswered questions, to the perception of a cheerless, hostile world. 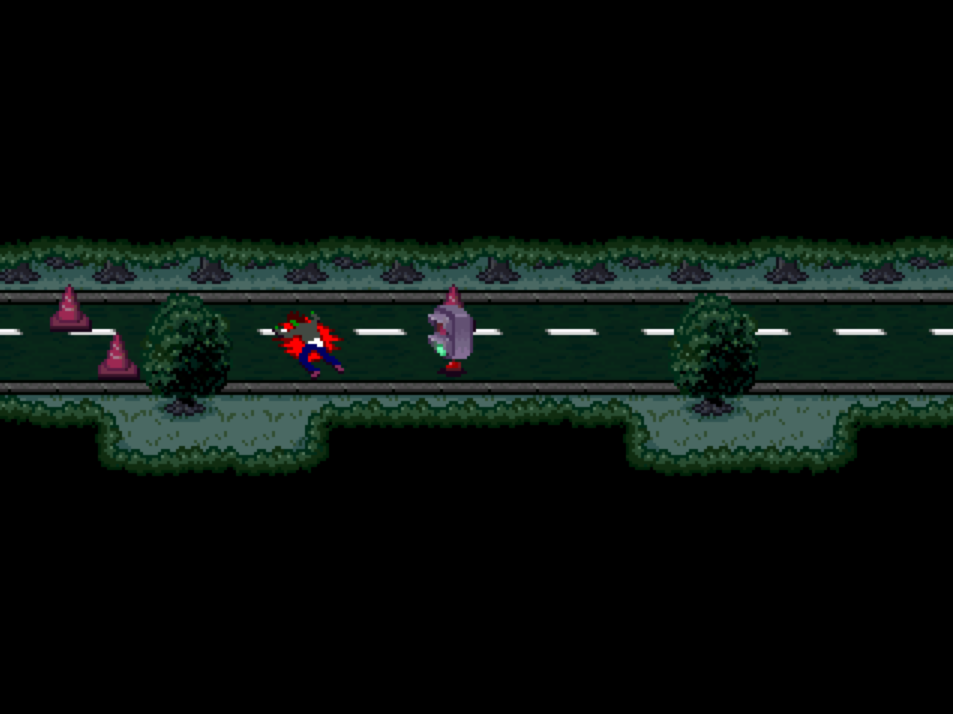 Violent scenes hint at potential traumatic events in Madotsuki’s past

While Hikikomori was initially thought of as culture-bound to Japan, emerging evidence of cases from other cultures suggest otherwise (Kato et al., 2019). Unfortunately, Hikikomori can face significant stigma due to negative perceptions of their condition (Pereira-Sanchez et al., 2019), which can be a further barrier to help-seeking for their treatable mental health conditions.

Games such as Yume Nikki could play a crucial role in increasing players’ understanding and empathy for Hikikomori by helping them experience, first-hand, the horrors of isolation. In fact, one study assessing individuals playing Yume Nikki found that players showed an increased understanding of Hikikomori alongside a desire to learn more about it, but only after reading articles on the game’s fan website cataloguing discussions by fans that explicitly consider the link between the game and Hikikomori (Bommarito & Dunlap, 2014).

It was remarkable how this was the case even when the game itself left a less significant impression on the players, leading the authors to conclude that experiences are meant to be shared and considered in a collaborative environment, in which the perspectives of others are to be built upon or contended with additional experiences. 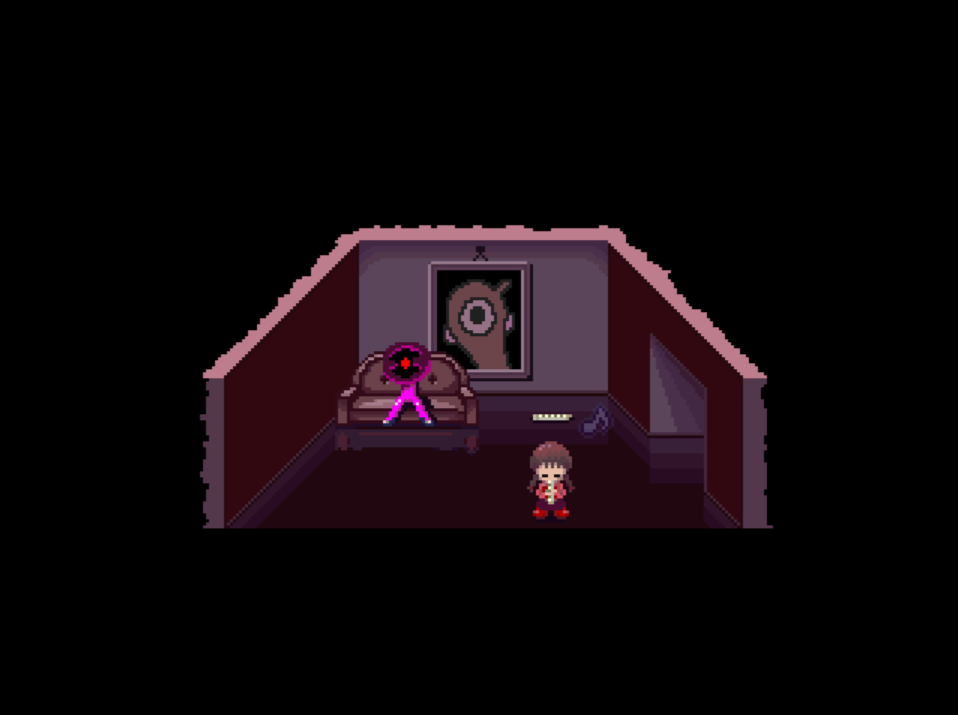 During this ongoing period of self-isolation, some of us at Gaming the Mind have found our own little ways to cope. Playing online games together and organising virtual group film watching sessions have both been good ways to stave off feelings of loneliness, and individual mindfulness exercises have personally been a great help in my day-to-day activities. It is important to remember that loneliness, isolation and Hikikomori are all similar yet distinct phenomena.

One can be objectively isolated without the subjective feeling of loneliness, and not all who are isolated would meet full diagnostic criteria for Hikikomori (Kato et al., 2020). Social isolation has itself been identified as a threat to mental (Coyle & Dugan, 2012) and physical health in older adults (Klinenberg, 2016), and both loneliness and social isolation are contributors to all-cause mortality in adults more generally (Holt-Lunstad et al., 2015).

Whilst the true mystery of Yume Nikki and the developer’s identity may remain unsolved for years to come, perhaps the game and this recent period of enforced self-isolation, as well as the discussion that they generate, can offer us a window into the experience of Hikikomori, or at the very least make us all that bit more empathetic to its profound impact.