Ever since I saw an early trailer for Mind Scanners, a game in which you work as a futuristic psychiatrist to “diagnose and normalise” people, I was intrigued. The game runs contrary to what you’d expect from a sensitive media portrayal of mental health, provocatively championing “normality” as an ideal, and allowing you to conduct invasive, forceful psychiatric treatments. However, the slogan at the end of the trailer hinted that this was a game with something important to say: “Don’t break the people. Break the structure!”

While the game does indeed feature challenging content befitting a dystopian setting, it made me think a lot about the issues presented. Mind Scanners casts an unnerving light upon our profession and forces us to reckon with the grim past from which we are still emerging. Is there any hope in its message? I had to speak to the game’s creator, Malte Burup, to find out more.

Working for the system

The premise of Mind Scanners is that you have been compelled to work for an authoritarian future-government and given the duty to “diagnose and treat anomalous citizens”. For Burup, the idea for this cyberpunk story has roots in the past. After visiting a museum on the history of psychiatry in Gent, Belgium, he began to think about our changing definitions of mental illness, and wondered “what is a normal mind?” and “who gets to decide what is correct behaviour?”

Burup set the game in a speculative future where the people who decide correct behaviour are the government, with psychiatry used as their tool of enforcement. “We made-up this cyberpunk scenario,” he said, “where the government fears its own collapse if it fails to keep the city in balance by removing any sign of mental instability.” This use of psychiatry as social control, of course, is not a fantasy concept. 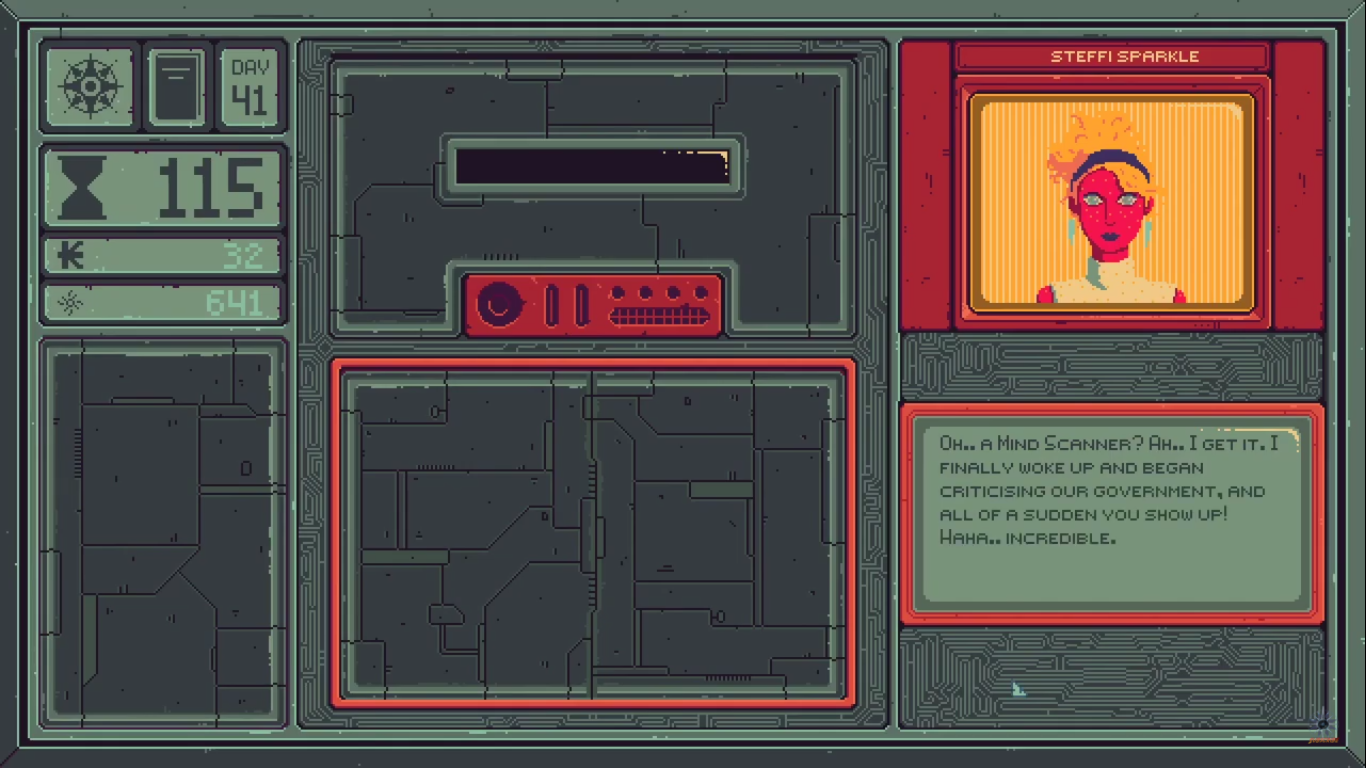 Some characters have clearly been targeted for political dissidence

Take, for example, a character who you are asked to assess because he is suspected of being a “robosexual”, which the game defines as someone sexually oriented towards robots. This is not new ground for psychiatry. “Throughout history, minority groups such as gay and transgender people have been incorrectly labelled as mentally ill,” said Burup. Indeed, the government only recently made steps towards banning conversion therapy, and only with the ICD-11 will the World Health Organisation depathologise trans and gender-diverse identities. The fact that people in real life do identify with terms such as “robosexual” makes the case more pertinent than just an analogy: could psychiatry end up labelling this an illness, too? “We want Mind Scanners to reflect on these mistakes,” said Burup, “so we do not repeat them.”

Another example with echoes of the real world occurs when you are asked to assess an activist who is too “vocal and extreme”. It is one thing to read about instances around the world where psychiatry has been used to pathologise and incarcerate political dissidents, and quite another to play through that same scenario as an agent of state control. “I thought it would be interesting to let the player take on the role of a psychiatrist – a role that comes with power and responsibility,” said Burup. “The idea was to let the players reflect on the ethical dilemmas and problems that can occur within psychiatry, by letting the player experience these first-hand.”

A look at this game would not be complete without acknowledging valid issues that people may have with it. The game allows the player to act abusively towards vulnerable people in order to make a point, and it can be debated that this is exploitative and unnecessary. Some may take issue with this being a game or piece of entertainment at all, and especially with the dark humour present, may find the handling of such serious subject matter to lack the appropriate gravitas. The depictions of forceful psychiatric management may be distressing. And some may worry that the game will, regardless of its intentions, create a negative impression of psychiatry, though I would argue that well-meaning efforts to de-stigmatise mental health issues should not be confused with sanitising psychiatry’s image. The game generally punches up at people with power, rather than punching down at people without it, but certainly anyone looking to play this game should be aware of these considerations.

The game makes no pretense of resembling the true complexity of psychiatry. “Mind Scanners delivers a poetic and surreal reflection on psychiatry, through artistic expression,” said Burup. Meanwhile, some simplifications exist to serve the gameplay: “We had to boil down diagnosis to a binary choice, and treatments down to the push of a button.” Assessments are rushed, limited to short scraps of dialogue, following which you make that binary decision of whether your patient is “sane”, or “insane” (insensitive language for an insensitive system). All “insane” people receive treatment, and get no choice in the matter. The sci-fi treatments are physical and invasive, but somehow, thankfully for the player, somehow less brutal than real historical treatments. Though this approximation of psychiatry can seem cartoonish, the player’s decisions, simple as they are, feel no less weighty. 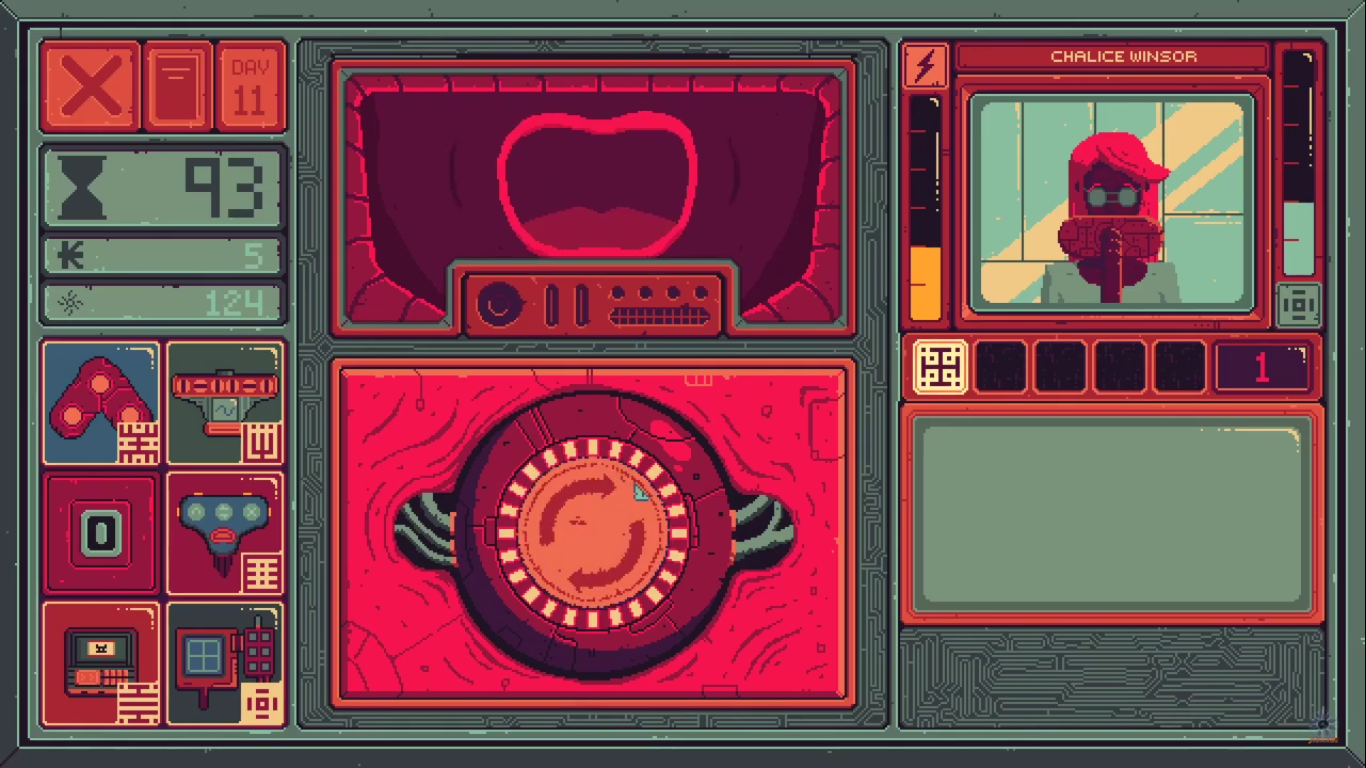 Treatment is conducted through mini-games. This device attaches to the larynx and extracts “insanity” through the vocal cords.

Though interactions with characters are brief, they can linger in the player’s mind and grow into larger ethical and moral considerations. One character believes in an imaginary friend who provides him company. If declared “insane”, he is treated against his will, leaving him upset to realise his friend never existed. With no further follow-up, the player is left to dwell on this. Why did the character need to be treated? The only issue raised in the psychiatric report was that the friend was “false”, but is falseness in itself a problem?

The player is generally kept in this position of discomfort. Though the game clearly frames the political use of psychiatry for repression as a bad thing, the player can’t simply declare everyone “sane” as a solution. Some characters genuinely seem in need of psychiatric care, due to the distress or risk they experience. Conversely, some characters don’t seem to need help, but then suffer for lack of treatment. One such character experiences being controlled by a golden worm, but in a way that seems to makes her life, and the lives of those around her, more pleasant. You can declare her “sane”, only to later be told she has given away all her money.

“We wanted to keep some grey areas,” Burup explained, “to communicate that the world is not just black and white. It is not always clear whether you are helping your patients or not, and in some cases, the result has a downside no matter what you do. An ethical dilemma.”

The consequence of these unsure moments is that the player is forced to think about what they value morally, rather than basing their decisions on what might be the “winning” outcome. It requires an acceptance that doing what you feel is right may not always have good results. You can’t declare everyone “insane” just to keep them “safe”, any more than you can declare everyone “sane” in the name of freedom. So you must decide where the line is. Burup hopes players will be guided by their gut. “Players who get sympathy for their patients will experience a much more emotionally driven story, where emotions dictate the game progression.” 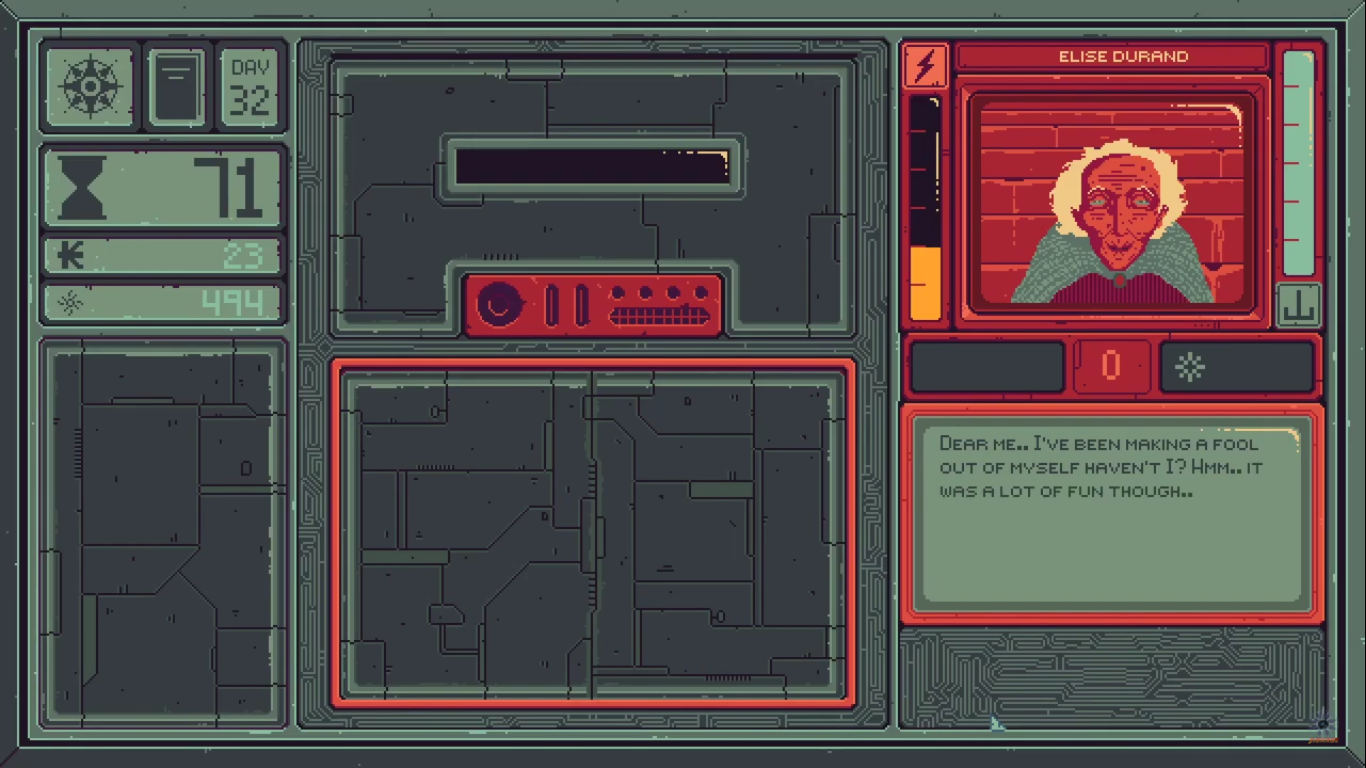 This elderly patient was reliving her youth until your treatment brings her back to the present. Did you do the right thing?

Things are made even murkier by the fact that your treatments in themselves can be harmful to patients, just as modern treatments can cause side-effects. The difference in the game is that you don’t get to inform your patients of potential side effects so that they can make a considered decision. Though, even in real life, patients do not feel very involved with clinical decision making. The fantastical treatments in the game risk destroying parts of the patient’s personality, which may be a nod to the emotional side-effects that certain psychiatric medications can have. A relative contacts you after you give one patient treatment, saying they miss his vivid imagination, then adding: “Perhaps he is a better fit in your world, but not in mine.”

Just as the player grapples with the idea of mental wellness as social conformity, they must also consider the influence of the society to which people must conform. Many prospective patients are brought to your attention because they have ceased to be useful as workers, such as one character who is reported as “neglecting” his work since the death of his mother. Some characters are reported to have become unwell due to job dissatisfaction, or inability to pay their bills. One character's issue is that his overspending will make him go broke and thus force his exile from the city. Social welfare programs are glaringly absent in this world, and the onus is on the individual to mentally adapt to the demands of society, not on society to meet the needs of the individual. These are things we consider in the real world, too, where our own social welfare programs have been insufficient to address poverty, homelessness, and other major social determinants of health.

Your treatment helps this man sell his hoarded action figures so he can afford to continue living in the city. But was his mental health the problem?

The choices the player makes are a measure of how willing they are to comply with an authoritarian system. Throughout history, in addition to (and often led by) activists from all walks of life, certain psychiatrists have stand rebelliously against prevailing attitudes. It’s easy to look back on instances where such dissenters were proven right by history and imagine we’d have acted the same, but harder to imagine how history will judge us for how we act right now. We are always striving to be better today than we were the day before, so we should welcome a game that makes us reflect on our values.

“I feel that the goal of any work of art is to ask questions - not to solve problems,” said Burup. “We will leave the problem solving to the professionals.” He is clear that the game is primarily intended as entertainment, but adds “we hope that the game will let players reflect on both the negative and positive sides of psychiatry and make their own thoughts on this important subject.”

It’s important to point out that the game does not advocate for abolition of mental health services. The very start of the game urges players to seek a mental health professional if they need to. Rebels within the game, who wish to take down the current regime, urge that you “need to take care of your patients... Keep treating, but with great care!” These rebels note that “mind scanners lack the resources to take proper care of their patients”, indicating that they do believe in the potential for mind scanners to do good. And, at the risk of fully exposing the creator’s hand, Burup has previously stated that “mental healthcare is a good thing and psychiatrists around the world are doing their best to take good care of people struggling with mental illnesses”. I also believe this. But it does help to look in the mirror.

Mind Scanners is available for Windows and MacOS