I knew before I joined the Royal College of Psychiatrists that it had a lovely collection of rare books but what I did not expect to find was an incunable!

Incunabula are books printed before 1501, less than 50 years after printing began in Europe. They are in some ways the rarest of the rare.

The RCPsych’s incunable is a copy of De Proprietatibus Rerum printed in Nuremberg in 1483, making it 536 years old. The text was originally written by Bartholomeus Anglicus in the early 13th-century and is essentially an early encyclopaedia. It has several chapters on medicine, including the following paragraph on mental illness:

Madness cometh sometime of passions of the soul, as of business and of great thoughts, of sorrow and of too great study, and of dread … as the causes be diverse, the tokens and signs be diverse. For some cry and leap and hurt and wound themselves and other men, and darken and hide themselves in privy and secret places. The medicine of them is, that they be bound, that they hurt not themselves and other men. And namely, such shall be refreshed, and comforted, and withdrawn from cause and matter of dread and busy thoughts. And they must be gladded with instruments of music, and some deal be occupied.

Before printing with moveable type was introduced, books were almost always made by monks, laboriously copying everything out by hand. The margins often included amusing illustrations out of sync with the text. Very occasionally scribes left notes like ‘ now I’ve written the whole thing: for Christ’s sake give me a drink’.

The manuscripts they produced were predominantly religious, very rare and expensive, simply owning a manuscript was a sign of wealth and status. The introduction of moveable type began to make them available to a much wider audience. This animation shows just how quickly the printing industry grew in the years before 1500.

However, it took some time for printers to leave behind the traditions of manuscripts and the College’s incunable is a good example of this. Despite the text being printed, all the ornate coloured initials you can see in the pictures were added by hand.

Despite holding onto old traditions, the introduction of printing meant manuscripts became devalued and many were used in the binding of new printed books. In the picture below, you can see a fragment of parchment has been used to reinforce the spine. 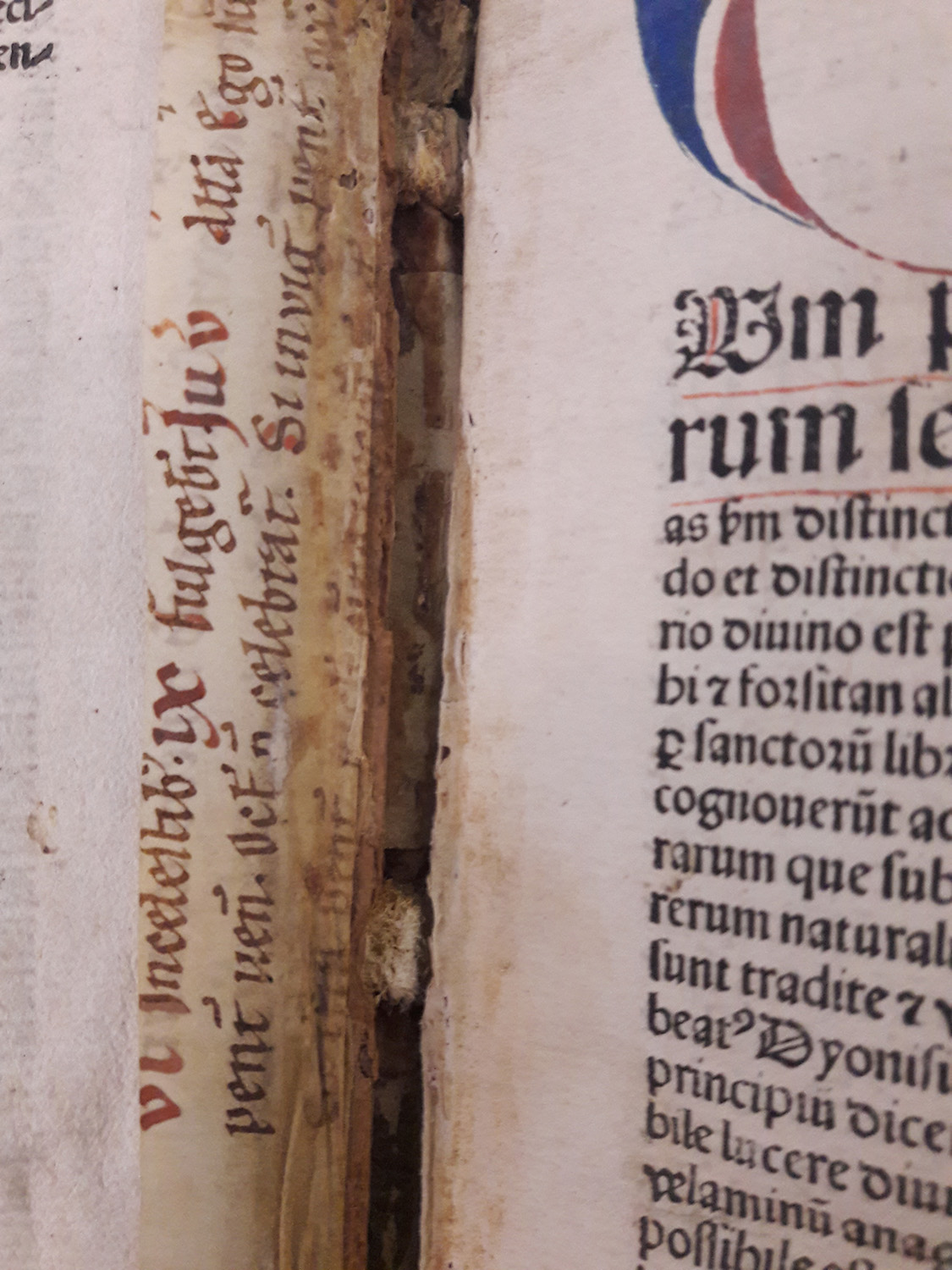 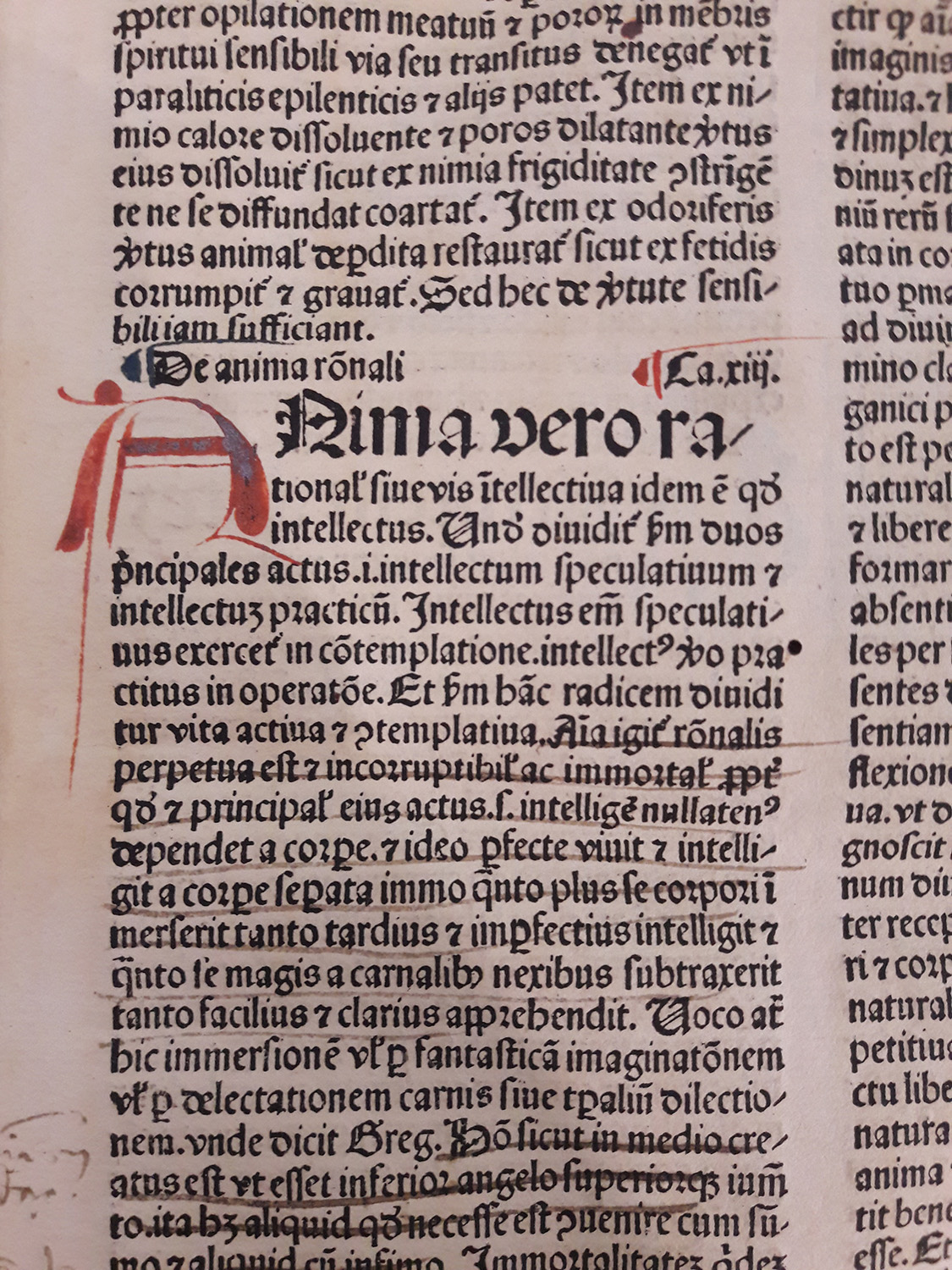 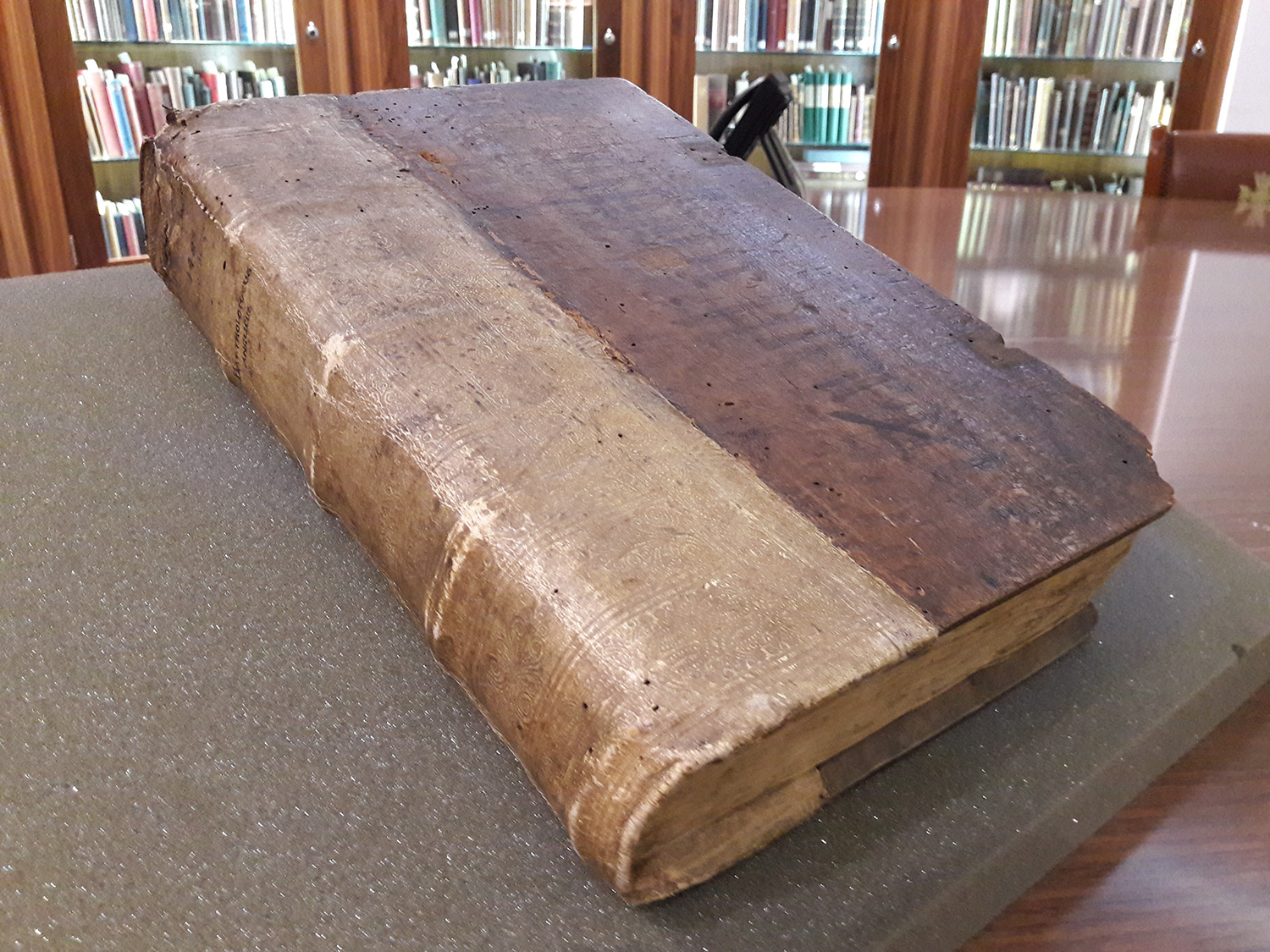 The book is in quarter bound in pigskin with wooden boards. Manuscripts and early books were generally bound in whatever type of leather was easiest to come by. In the UK, we are accustomed to seeing books bound in dark leather that sourced from cows. However, because this copy of De Proprietatibus Rerum was produced in Nuremberg it shows the distinctive white pigskin that was commonly used in Germany and the Netherlands.

Many of the books in our collections are in need of conservation and the College has been running an ‘adopt a book scheme’ for more than ten years to encourage members to donate. So, if you speak to a member looking to commemorate an occasion or loved one, please point them in our direction.

One of the major misconceptions about handling rare books is that you should always wear white gloves. However, most people now agree that this is not necessary. The majority of paper and parchment is not easily damaged by the oils from our hands and wearing gloves decreases your sensitivity, making it more likely you that you will fumble and rip a page, or drop a book. Archives are often more delicate than books and gloves do need to be worn when handling rare photographs.

If you see differently on TV it is because they are sick of taking calls from irate members of the public telling them they are doing it wrong!

If you are interested in studying any of our rare books, please get in touch with either myself or the Archivist: