Alexander Walk and the Gaskell Club

Philippa Grossett is interning for Francis Maunze (Archives and Records Manager) in the RCPsych Archives, researching, unearthing, and getting down in the dust with the College’s great collections.

As Archives Intern I have been cataloguing born-digital and digitised records such as newsletters, membership yearbooks, and historical supplements. This project  is part of ongoing work to provide easy access to records for members, researchers, and staff. It has given me the chance  to learn about the history of the College and the people who greatly contributed to its development; one of  whom was Dr Alexander Walk (1901-1982).

Nestled within the grey brown of the archive is a series of seven standing boxes, each full to the brim with carefully catalogued and numbered documents. As a former honorary librarian to the College for 30 years, President for 1961-2, co-editor of the College journal, prolific writer, and superintendent of Cane Hill Hospital, his personal papers reflect his varied interests. Mostly untouched since their donation, the collection holds hundreds of Dr Walk’s notes, articles, research, and correspondence, collated during his career and time with the Royal Medico-Psychological Association (RMPA), the predecessor to the Royal College of Psychiatrists in 1971.

Whilst there are many interesting items within this collection, one which has sparked an interest are a series of typed and signed menus from 1932-1969. Headed with a grey embossed medal and held in prestigious locations across London, these were grand dinners with five or more courses and eloquent speeches. They were home to the Gaskell Club, a group of top consultant psychiatrists who had trained, studied, and then completed the two arduous exams to be awarded the Gaskell Prize and medal. The dinners were celebrations for the latest winners of the Gaskell Prize and medal and an opportunity for past successors to convene for an evening of good food and conversation, away from their official roles and practice. The award acted as a leveller within these dinners, where College presidents and psychiatric experts within their field would be seated amongst the newly awarded medalists and discuss present and historical matters relating to psychiatry. As a formal occasion, winners were treated with reverence as some of the brightest psychiatrists from the College, with membership to the Gaskell Club spanning the globe. 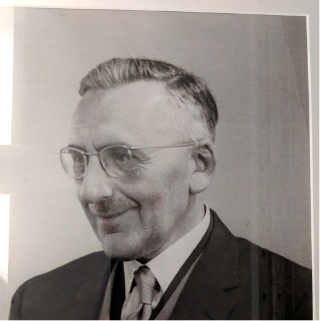 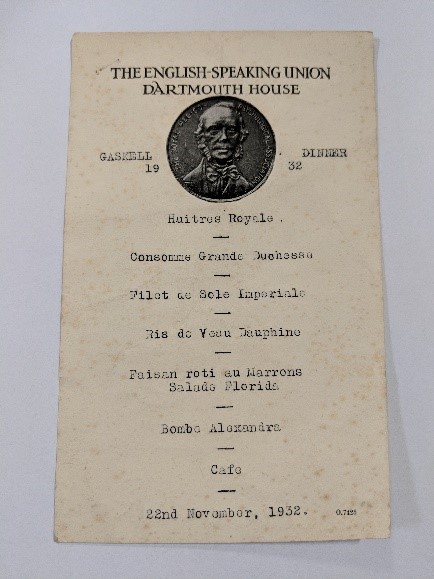 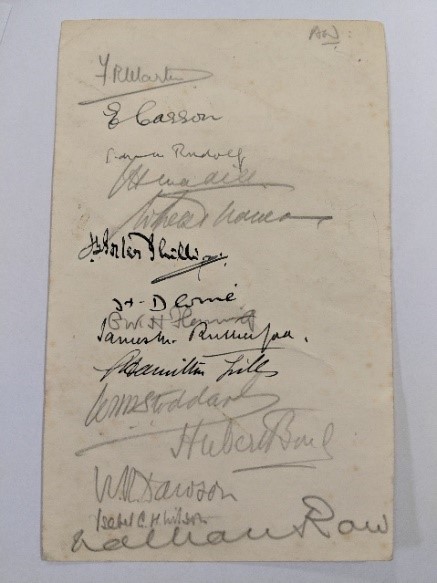 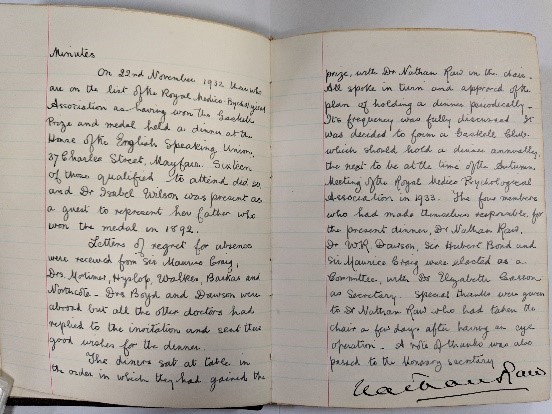 The dinners usually stuck to a formal structure; with pre-dinner drinks, a seated meal, speeches, and after dinner refreshments with coffee Discussions during dinner were seldom mentioned within the minutes but notable subjects and speeches were briefly recorded.

The minute book from these dinners is also held in the archive and sheds some light on a few of the miscellaneous subjects within the Alexander Walk collection. On several occasions, Dr Walk gave short speeches touching on psychiatric history and that of the College, such as his “full and illuminating account of the illness of His Majesty King George III…[and] details particularly concerning his first breakdown, with quotations from the diaries and other references of the time.” (GB 2087 RCPSYCH A/2/1). Dr Walk’s notes and research concerning this, and other speeches, can all be found within the rest of the Walk collection.

The signatures on the back of the menu show the members and guest who attended the inaugural dinner, yet it was not used for any official purpose. As with any formal occasion the minutes were kept, and attendees signed the minute book during the dinner. So why was there a need to sign the back of this menu? From learning more about Alexander Walk and his habits, documentation and preservation of events, paired with a strong incentive to catalogue and organise perhaps gives a reason to why these menus were kept.

As a man who liked to know everyone and preside over information, having the names of some of the brightest psychiatrists to hand would have been useful. His myriad of roles within the RMPA and his connections through Cane Hill Hospital were thanks to both his dedication to psychiatry and a nifty skill of knowing the right person to speak to at the right time. The Gaskell Club dinners were also looked upon fondly by many, older members of the profession watching the fledgling psychiatrists bloom into their careers, other members reaching the top of their professions. Letters written during the 1960’s regarding the re-introduction of these dinners show that many enjoyed the dinner and the community it developed between the winners, a legacy of Samuel Gaskell and those who were deemed worthy of his prize.

It is the Gaskell Club minute book that acts as the key to begin to understand some of the papers found within the rest of the Alexander Walk collection. Whilst many topics can be attributed to his key lectures, essays, and interests, others seemed to have no link to anything mentioned. The RCPsych archive can appear to be full of meeting minutes and official documents but pull back the curtain and there is a wealth of knowledge and interesting items awaiting research and interest. Some items, such as these menus, require a little digging to glean a fuller understanding of why they have been preserved in the archive and their use for the future.

The Alexander Walk collection is full of insightful notes on the history of the College, medical practice for mentally ill people, and the transformations of asylums and hospitals during the nineteenth and twentieth century.

For any more information from within the Alexander Walk collection or from anywhere in the archive, please contact the College Archivist, Francis Maunze at francis.maunze@rcpsych.ac.uk.