Where have all the asylums gone?

Have you ever wondered where all those Victorian and Edwardian “lunatic asylums” have gone? This summer, with social distancing and staycations, gives you a perfect opportunity to visit some of them, alongside other places on your travels. Curiosity led us to make a grand tour of some informally designated Psychiatric Heritage Sites (PHS: akin to the better known UNESCO World Heritage Sites, WHSs) in Kent, Sussex and Surrey. As with WHSs, learning from PHSs contributes to our understanding of bygone times and provokes thought on current challenges.

Some people shuddered at the thought of us touring former asylums. For them, the idea conjured up derelict, creepy, and haunted edifices, pop culture images perpetuated in movies,  which do little to enhance public perceptions of people with mental disorders or the staff who treat them.  Well, it isn’t quite like that, although we did climb through broken railings into neglected, overgrown cemeteries, and meet some ghost hunters about to commence a séance in a former asylum main hall!

In this blog, I shall tell you a little about the origins of the asylums in England and Wales, then give you some clues on how to find them, and what you might discover, and conclude with some thoughts about past and present.

The County Asylums Act (1845) mandated local authorities to provide lunatic asylums (a respectful descriptor at that time). The Lunacy Act the same year established the Lunacy Commission which had responsibility for them, including overseeing them to ensure humane care. Asylums were intended to be places for restoring mentally sick people to good health, so they were usually built in health-promoting, fresh-air, sunshine-catching locations, surrounded by farmland and forests, like country retreats, independent schools and sanatoria.

So how might one begin to explore our psychiatric heritage?

County Asylums is a good place to start. It lists county and borough asylums in England, Scotland and Wales, plus private, subscription, criminal, mental deficiency and some other institutions. The map on Time Chamber is helpful, as are reference data in Wikipedia (but beware of some of the subjective commentary). When you have identified a place to visit, search the Ordnance Survey historic map collection (c.1840-1991) at the National Library of Scotland. I like the 6-inch (c.1840-1960) maps, as institutional buildings tend to be indicated in solid black, which makes them easy to zoom in on.  Maps not only tell you where to find places but can give hints about what to look for and changes over time.

The example here relates to the former East Sussex County Lunatic Asylum at Hayward’s Heath (opened 1859). It had a chapel, water tower, sewage works, infectious diseases unit, farm, burial ground and woodland. Over time, more buildings appeared, such as those marked on the maps as “Hospital”. These were state-of-the-art admission units associated with the Mental Treatment Act 1930 and Mental Health Act 1959. 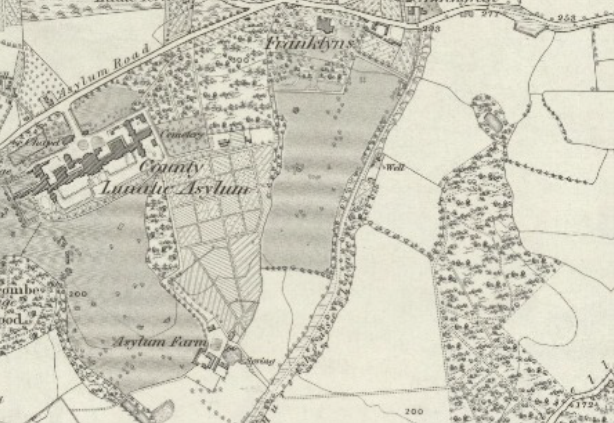 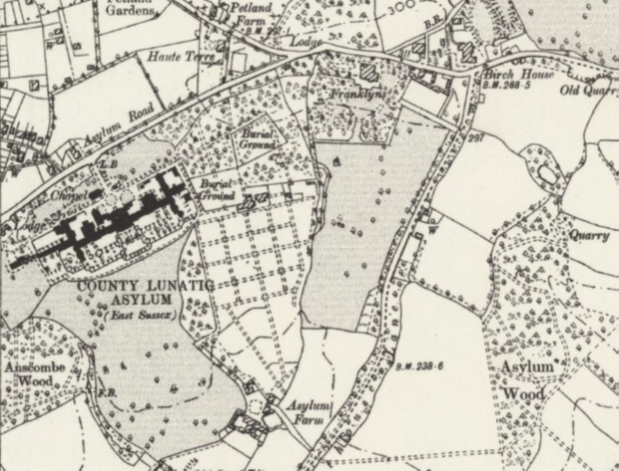 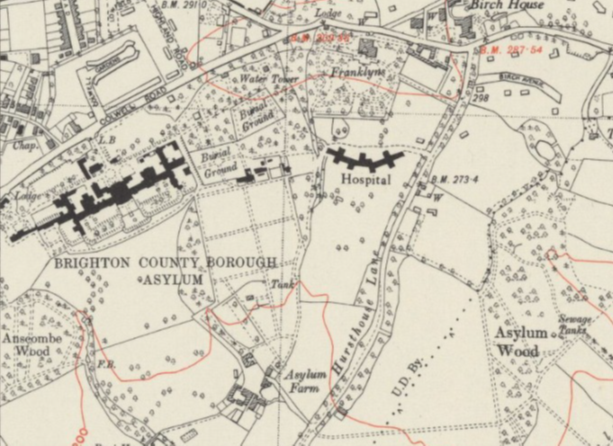 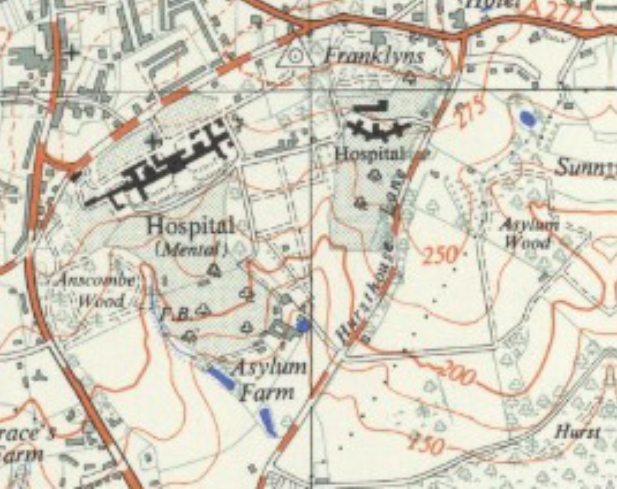 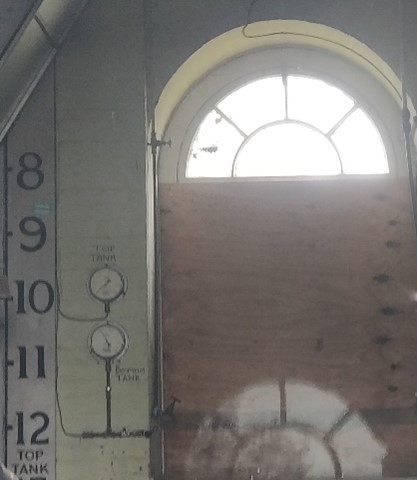 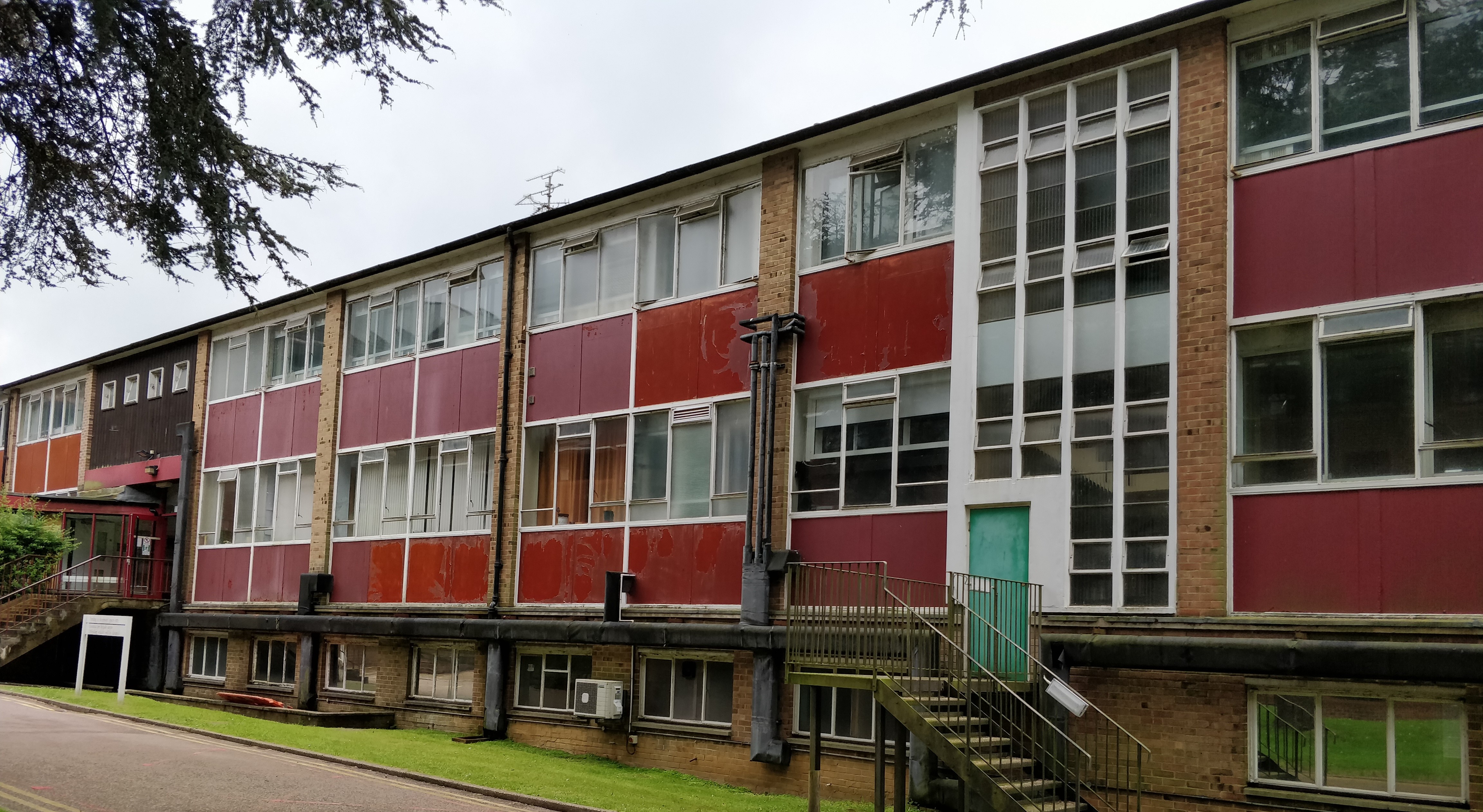 We love this place! It has so much history. It’s a truly beautiful setting. And we are all very aware of the precious nature of this amazing place. It’s been here for over 150 years. The main building is grade II listed … It’s an important part of Haywards Heath history. It’s a gorgeous place.

The nature of the “so much history” seems taboo. I suspect that if the place had had an elitist purpose, some indication of that history would have been mentioned.

Usually, signage about former usage is absent. Occasionally, one finds an information board or retained foundation stone, and in some places, NHS mental health services are still provided from old and new buildings on the site. Planning documents for converting one former asylum into housing proposed that “A change of name would help in creating a new sense of identity”, emotionally distancing the new community from any taint of mental illness stigma.

The institutions were never stagnant: patients were admitted, some discharged, with others staying long term and some buried on the site. Patients and staff worked together, such as on the farms (at times raising concerns about exploitation of patient labour). One can imagine patients walking, often escorted by staff, from their wards to the farm, or attending church services with gender-segregated seating, or living for years in Nightingale style wards in the main buildings. Modern facilities were created in the hope of improving recovery rates and attempts to modernise attitudes were reflected in name changes.

Despite the best of intentions of the institutions’ founders, they gradually failed, fuelled, at least to some extent, by stigma, rigid mental health law, financial retrenchment, inflexible institutional practices, and the slow rate of clinical-scientific development. When you explore the former asylums, ponder a little on the past and on the challenge of how you might create, then consistently maintain, ideal standards for mental healthcare today.