Even in death, patients and staff were never quite equal: exploring asylum cemeteries

On your staycation this summer, you might come across former asylums and mental hospitals (using the respectful terminology of the 19th and early 20th centuries), and their cemeteries, the last resting place of thousands of patients and some staff. Across many generations, these asylums and hospitals were “total institutions”, providing for every need, cradle to grave. Not that patients were in their infancy, but some patients and staff gave birth in them, and some died in them. Almost self-sufficient, asylums had all sorts of facilities; farms, kitchens and laundries; light industry and workshops; gas and sewage works; and often a cemetery, sometimes with its own chapel. Old Ordnance Survey maps often mark the cemeteries, such as at the London County Asylum near Bexley. You can see the cemetery marked with 'cem' at the bottom left. 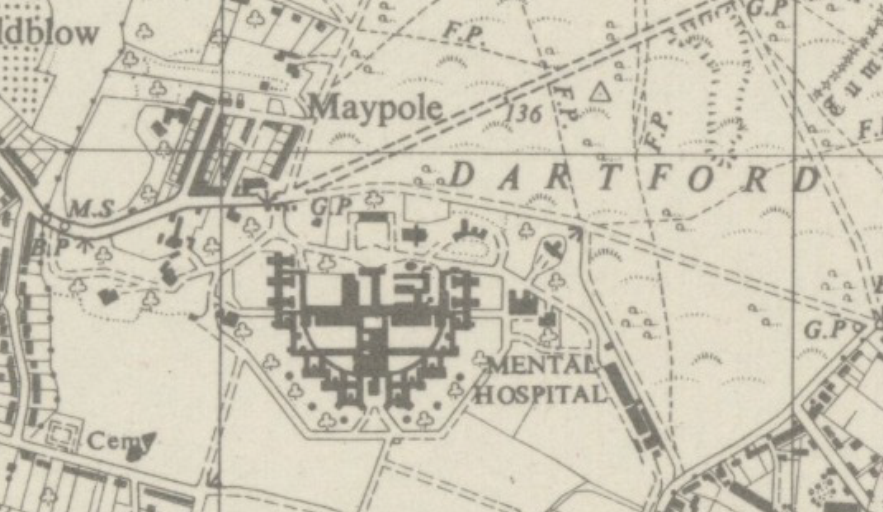 Visiting that cemetery in July 2021, this is what we found: 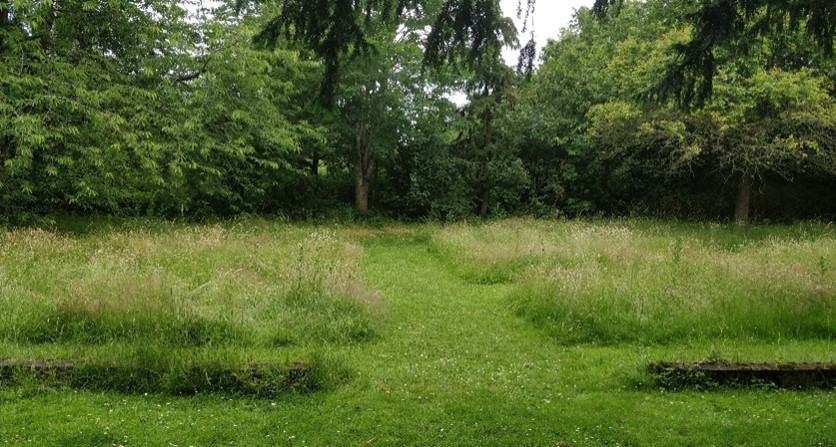 There are no headstones. Nearby is a modern church, and someone working there told me that the ridges in the foreground (picture above) were the bases for iron railings associated with the cemetery. The vicarage garden overlaps the cemetery, and the vicar said that small metal numbered grave markers have surfaced in their garden. Such markers were used when patients were buried at the expense of the authorities: names were recorded in the cemetery register under the allotted grave number. At Bexley, they placed up to 6 coffins in each grave.

Twenty miles south-west of Bexley, at the corner of Chaldon Road and Green Lane, the cemetery of the former Metropolitan Asylum Board’s Imbeciles Asylum at Caterham provides a different spectacle: a lone headstone in woodland, separated from its surroundings by an impenetrable fence. 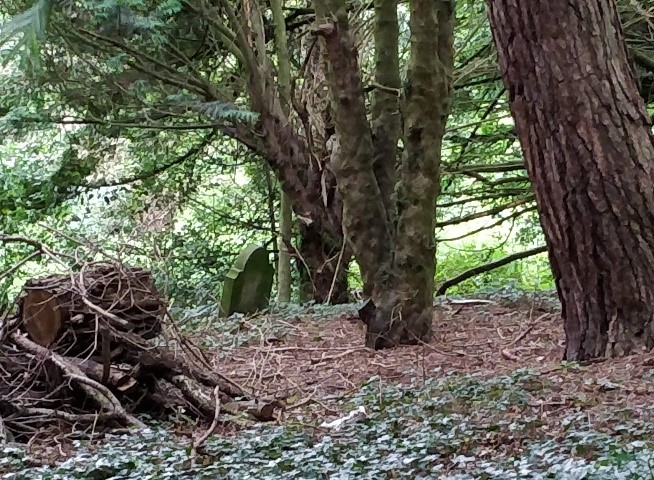 You can see the outline of the cemetery, marked just above the road junction at the centre of the foot of the map below. It shows a neat path and a single small building, which may have been a chapel, but there is no label to say that it was a cemetery. 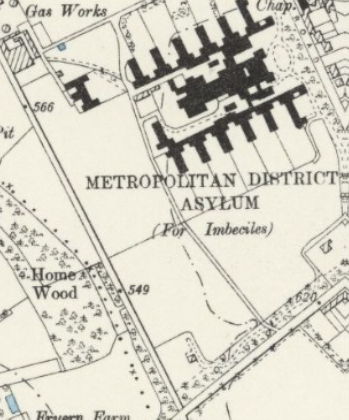 Moving a few miles northwest, the cemetery of the former Banstead Asylum is tucked away behind its farm buildings. The best view is probably provided by Google maps (51.339148, -0.184906), outlining the graves from the air: 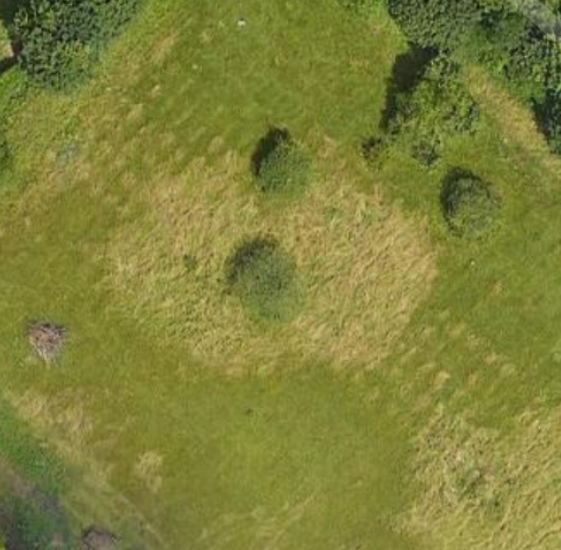 Typical of an asylum cemetery, there are just a couple of headstones. More unusually, one of them (the pale spot at the top of the image near the center) is a Commonwealth War Grave:

According to the Imperial War Museum, Reginald Adolphus Moyse (b.1879) was married and father of four sons. He suffered physical and mental trauma while fighting in France and Belgium, and was discharged from the army as medically unfit in 1916. He died at Banstead, suffering “total incapacity”, thought to be due to General Paralysis of the Insane (neuro-syphilis).

Elsewhere, much effort has been made to remember former patients and staff in a dignified way, even though most remain anonymous. On Oakapple Lane in Maidstone, the “Welcome to Oakwood Cemetery” sign informs visitors that the cemetery “is the final resting place for thousands of people”. Most are in unmarked graves, but there are about 25 headstones, a war memorial and a neatly boarded-up derelict small stone chapel. Some of the headstones identify staff, such as two (below), in the same design, one for nursing sister Emily Kate Neve, who had served in France during the Great War and died age 49 in 1933, and the other for probationer nurse Rose Blackmore who died age 23 in 1931, who “gave her life to nursing the sick. A noble end.” 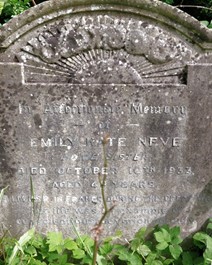 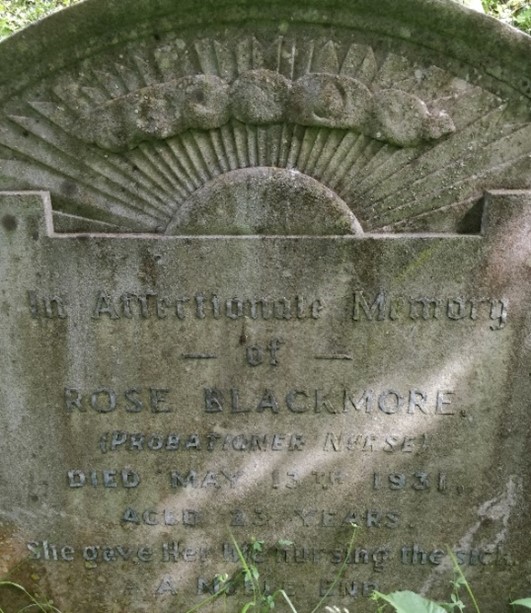 The individual memorials to staff are in stark contrast to the patients’ nameless graves. Dr James Murdoch, medical superintendent of the Berkshire Mental Hospital at Cholsey, Wallingford, was buried alongside his patients. The bare grass of their graves contrasts with his elegant, though weather-worn, memorial and magnifies their contrasting status in the society in which they lived. Patients and staff of former mental institutions were never quite equal, even in death. 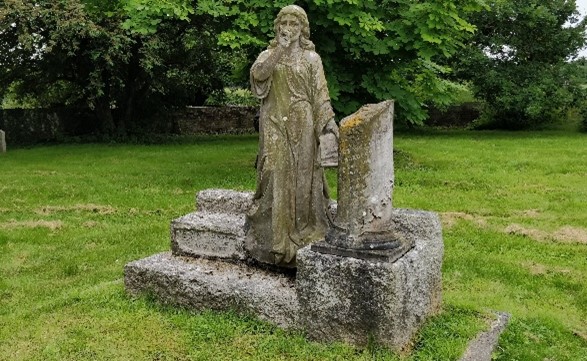 Former asylum cemeteries are not the only memorials which deserve debate. Memorial preservation is a hot topic. It is unclear, for example, what will happen to the National Covid Memorial wall in London. According to the Guardian, legally, its fate rests in the hands of St Thomas’ Hospital and Lambeth Council. Black Lives Matter has raised many questions about memorials, memory and history. There are calls to “decolonise” our minds and evaluate and learn from the harm and good done in previous generations, particularly to those people who were denied a voice in life at the hands of those with authority. The mental institutions were mini-colonies on our doorsteps. What should be done with their cemeteries?