Have you ever had that strange sense of déjà vu, that you had been there before?  If not, you soon will if you begin to explore former county lunatic asylums and mental hospitals. 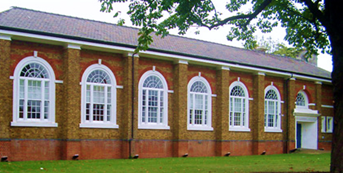 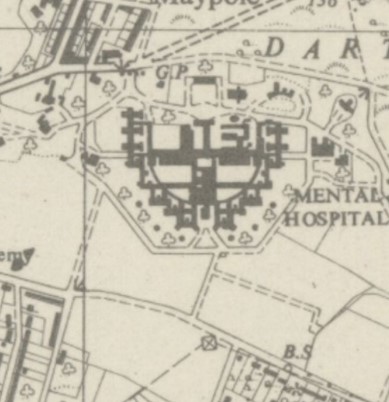 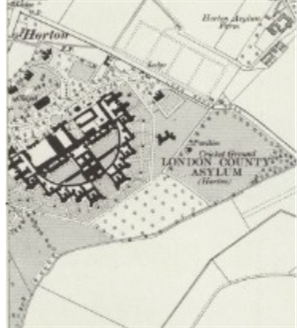 The matching chapels photographed here were once part of two almost identical London County Asylums, 25 miles apart. The top one is at Bexley, and the bottom at Horton, Epsom. The bricks may have been different colours when originally constructed, but restoration processes may have further enhanced the differences. On the accompanying maps, outlines of the former institutions appear not quite identical. This is probably due to different dates of constructing the original buildings and adding extensions, relative to the mapmakers’ dates of surveying, plus changes of map scale and of the criteria used to decide which features should be included in a particular map series.

A small number of architects designed many of the country’s county asylums. The cynic in me suspects that this was more cost-effective for the Lunacy Commissioners. It also bears the hallmark of a conservative leadership: if something works, then repeat it, rather than try to achieve better. Thus, George Thomas Hine (1842-1916) designed at least a dozen asylums, most of which were in the “compact arrow” design of Bexley and Horton.

At Bexley, glimpses of floor tiles inside the chapel indicate the care with which it was designed and constructed, and a foundation stone outside at the western end tells us more: 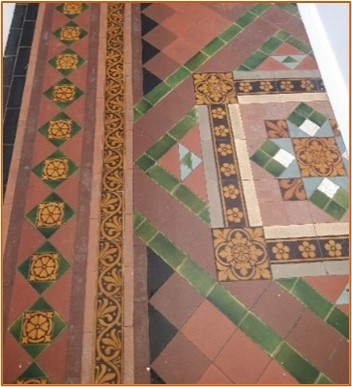 The Bexley and Horton chapels could each seat over 800 people, over one-third of the patients in each asylum. Church attendance was optional, but for many, it was an important part of their lives. Around 1918-19, Mary Riggall was a patient in a mental hospital.  After discharge  she wrote:

We had a very nice church in the grounds, and services were held both morning and afternoon every Sunday. All the men patients sat on the right, with their attendants, and all the women and girls on the left, with the nurses….

It was really wonderful how orderly the services were. There was a large organ, and the singing went well.

I remember I used to compare our company of men and women to St. Peter when he was in prison, because we always lived behind locked doors in the hospital, and behind locked gates in the grounds.

I said, one day, to a companion, "Prayer was made for St. Peter when he was in prison, and God sent an angel and delivered him—therefore it seems to me that we had better pray that we may recover and be allowed to go home."

(Mary Riggall, Reminiscences of a Stay in a Mental Hospital, 1929)

if any patient be of a religious persuasion differing from that of the established church, a minister of such persuasion, at the special request of such patient or his friends, shall, with the consent of the medical officer…be allowed to visit.

In the early 1900s, Colney Hatch Asylum admitted patients from the large immigrant Jewish community in the East End of London. The asylum employed interpreters, had a kosher kitchen and a visiting Jewish minister, Reverend Solomon Lipson, and arranged for sabbath and festival celebrations. Later, a room was set aside as a synagogue.

After-thoughts: past and present

Today the chapel at Bexley is a fitness spa. Despite the commemorative stone, the staff member who kindly showed us around, had no idea of the origin of the building in which she worked. At Horton, the chapel is being converted into an arts centre. Restricted in our explorations by building-site barriers, we could see nothing to identify the building’s original use, although an optimistic future-use banner was displayed on the railings. I hope that their plans include something to commemorate its history. 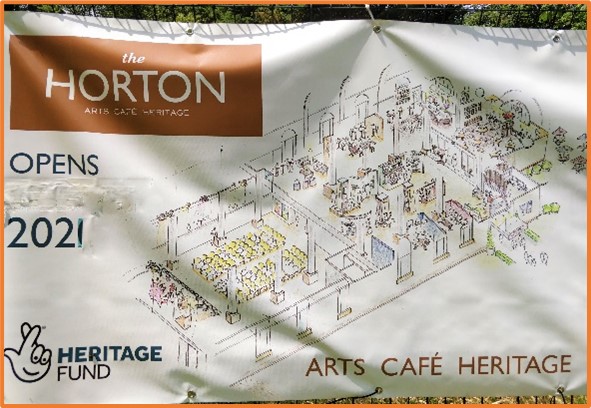 Too often, the asylum pictures you will find on the internet show derelict buildings reflecting neglect and decay, symbolic of our stereotype of the standards of care provided for patients who were once in them. I much prefer the photos of restored buildings which convey some idea of the objectives of providing dignified and therapeutic care, even if not consistently achieved.

The former chapels represent past attempts to enable people with debilitating chronic mental illnesses to lead meaningful lives incorporating religious and spiritual dimensions. These goals were not fully achieved, but it is also debatable how well today’s mental health services score on them. Do we pay sufficient attention to these aspects of our patients’ lives? For patients dispersed in the community today, participating in collective worship and religious events may be more challenging than when the institutions in which they lived facilitated those activities.