Water towers: icons of the asylums and mental hospitals

As historian in residence at the RCPsych, all sorts of emails come my way.  This one arrived recently: “as I dropped my daughter off at a friend’s house, near St Albans – I noticed a huge tower dominating the leafy housing estate where her friend lived…it was part of the Shenley Mental Hospital!”

My colleague had found the hospital’s water tower.

Here are some more of them:

(left to right) Cane Hill, under restoration. St Augustine’s, surrounded by a modern building (in my opinion, rather out of keeping with the original). Claybury: During the First World War, the tower was also used as lookout post. The asylum charged the Admiralty for repairs following damage caused while in use for this purpose (LCC/MIN/00948, 6 Dec 1917, London Metropolitan Archives)

Why did mental hospitals have water towers?

In places which lacked a mains water connection, supplying clean water could be a challenge. This was particularly so for a densely populated rural institution, such as a mental hospital, which might have over 2,000 residents. Pumping water into a storage tank at the top of a tower ensured a sufficient and flexible supply of fresh water to meet variable demand during every 24-hour period. In addition to supplying water for daily use, the towers provided water in the event of a fire. In the days when asylums had gas lighting, coal fires for heating, and wooden floors shined with inflammable polishes, and patients might be encouraged to smoke cigarettes as a suitable pastime, fires were not uncommon. Some asylums trained their own fire brigades of staff and patients who worked together in the event of an emergency.

To give you an idea of the size of the water supply enterprise, when Goodmayes Mental Hospital, Essex, was extended in the 1930s, an additional well was sunk, 127 meters deep, and its pump was capable of pumping 12,000 gallons per hour up to the main tank in the tower. 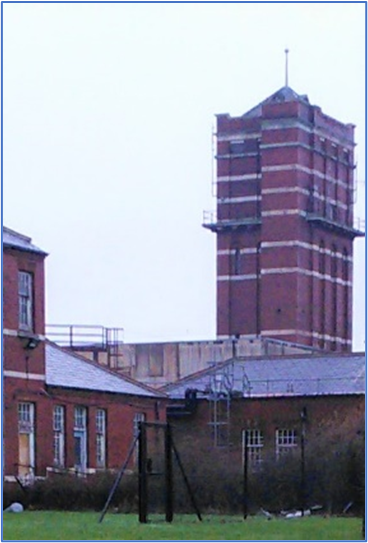 Water was pumped from a well into storage tanks at the top of the tower. By pumping the water in at a steady rate, the tank would refill at times of low demand. The tank inlet was controlled by a float or ball valve, like in a toilet cistern, to prevent overflow. The height of the tower allowed gravity to create the hydrostatic pressure to force the water through the system of pipes and deliver it at a reasonable rate when multiple end-users turned on their taps at the same time.

Dr Charles Mercier described the logistics of water supply management in his book Lunatic Asylums: their Organisation and Management (1894, pp.17-18). The system:

necessitates, of course, a powerful pump, with its necessary accompaniments, a steam-engine and boiler-house. The extreme and vital importance of the water supply renders it necessary that pump, engine, and boiler should be duplicated, so that in the event of any portion of the system breaking down, the working may not be interrupted…

The water tower should be at least 20 feet higher than the highest part of the remainder of the asylum, and the tank should be capacious enough to hold at least forty-eight hours' supply. The pipes, both the rising main and the supply, should of course be inside the tower, in order to guard against frost. In a conspicuous position, frequently passed by both the engineer and the superintendent, should be an index, actuated by a float in the tank, showing the depth of water, or better, the number of gallons contained therein.

A water tower with “index”, or gauge, of similar vintage to those in asylums, can be seen at Polesden Lacey, a National Trust property in Surrey (pictures below). It is still used to provide water for irrigation or in the event of fire. The gauge is immediately visible to passers-by, located within the archway passage at the foot of the tower. It indicates that the tank is filled to a depth of 12 feet and contains 23,000 gallons of water. (With thanks to Collette Hamilton at Polesden Lacey) 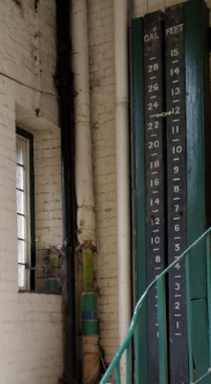 Today, perhaps the context in which psychiatrists most often discuss mental hospital water towers, relates to deinstitutionalisation and community care, linking to a speech by Minister of Health Enoch Powell, in 1961. He addressed a conference of the National Association for Mental Health (now called Mind), outlining government proposals to close the mental hospitals. It was dubbed “The Water Tower Speech” because Powell described the existing hospitals, “isolated, majestic, imperious, brooded over by the gigantic water tower and chimney combined, rising unmistakable and daunting out of the countryside – the asylums which our forefathers built with such immense solidity to express the notions of their day.” Professor of history Joanna Bourke commented recently on the subsequent process of deinstitutionalisation:

In the years that followed Powell’s speech, mentally ill people moved between hospitals, care centres, other local facilities and family homes, as well as within a growing sector of “for-profit” care. The belief that welfare dependency was obsolete and morally corrupting grew; the mentally ill were not only encouraged but required to become independent and autonomous.  (in: Mind, State and Society: Social History of Psychiatry and Mental Health in Britain 1960–2010, eds. Ikkos and Bouras, 2021 p.4-5)

Bourke’s commentary raises further debate about social justice, not just looking back to the former institutions, but towards what we, as a society, provide for mentally ill people today.