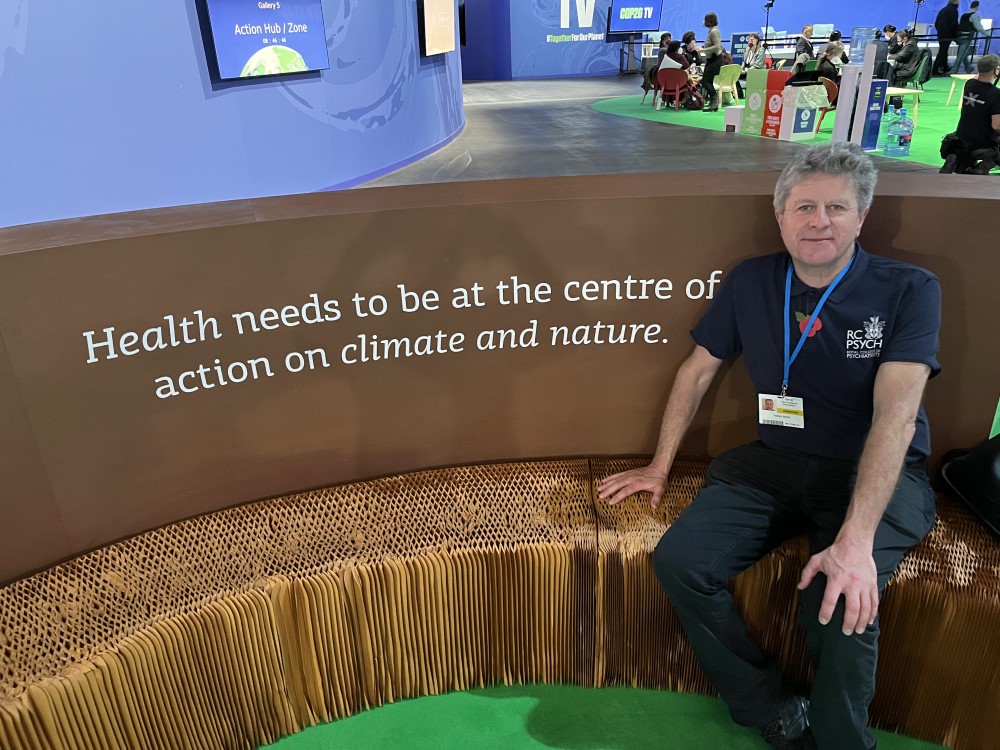 Dr Adrian James at the COP26 climate conference in Glasgow.

Back in May this year the College took an important step in declaring a climate and ecological emergency. We know that this is also a mental health emergency, and so it was imperative that we join those who are calling for urgent action.

This month the world turned its attention to COP26 climate change conference in Glasgow. The conference brought parties together to accelerate action towards the goals of the Paris Agreement and the UN Framework Convention on Climate Change.

Excitingly, the College had been awarded observer status at the conference and this meant that I could lead a delegation of RCPsych members and staff to Glasgow. Associate Registrars for Sustainability Dr Lisa Page and Dr Jacob Krzanowski, along with many others, worked hard to highlight the connections between mental health and the climate emergency.

When I arrived at COP26 it was disappointing to see that the WHO Health Pavilion where we were stationed was very much a side event, nestled next to Saudi Arabia and The Resilience Hub.

However, we were able to work together to strengthen our collective voice. Our joint event with the Royal College of Physicians and the Royal College of Paediatrics and Child Health, titled What is the future for healthcare if we do nothing about the climate crisis?, was a great success (you can watch a recording of the event).

We spelt out the impacts, making clear that the threats to mental health go beyond PTSD and depression due to flooding and eco-anxiety; it's also temperature hikes exasperating existing Severe Mental Illness.

We know that behind-the-scenes NGOs were working hard to persuade other countries to decarbonise their health services, so progress is being made, but ultimately, we still have a lot of work to do.

Mental illness in refugees and migrants in detention

We know that the changing climate is causing instability to land use and access to resources, which in turn can lead to increases in forced migration.

Between April 2019 and March 2020, 23,075 refugees and migrants were detained in the UK. Many will have endured terrible experiences in their country of origin and during their often difficult and dangerous journeys to the UK, including bereavement, separation from loved ones and loss of home, status and identity.

This month the College has been drawing attention to a new systematic review published in BJPsych Open which shows that rates for depression, anxiety and PTSD in refugees and migrants in detention are around twice as high as rates for those not in detention.

It's crucial that refugees and migrants with existing mental illness are not detained as a matter of course. Staff should be given proper training to identify mental illness when it arises or deteriorates significantly, so that this can be managed appropriately by linking with local mental health services.

We’re also calling on the Nationality and Borders Bill to be scrapped, as this harmful legislation will worsen the mental health of refugees and migrants. The bill stands to leave thousands in limbo by focusing on how they arrived in the UK, rather than their need for help.

I was delighted to be able to present at the RCPsych Awards 2021 virtual ceremony alongside Registrar Dr Trudi Seneviratne. There really have been some fantastic achievements this year, and it was wonderful to be able to celebrate them.

Amongst our awards were the President’s Medals and Honorary Fellowships.

The President’s medals are designed to honour and offer the College’s gratitude to a small number of deserving people who have contributed to policy, public knowledge, education and meeting population and patient care needs in diverse and challenging circumstances. This year’s winners were Professor Carolyn Chew-Graham, Dr Virginia Davies, Dr Ian Hall, David Harewood MBE, Ajibola Lewis, Dr John Mitchell and Dr Philip Timms. I am truly astounded by all their contributions this year. My heartfelt congratulations to them all.

Those receiving the Honorary Fellowship this year were Professor Dame Sally Davies, Dr Jacqui Dyer MBE, Professor Louise Howard, Professor David Taylor and my immediate predecessor Professor Wendy Burn CBE. All have demonstrated distinguished service to humanity in relation to the study, prevention or treatment of mental illness or psychiatry throughout their careers. It was a real privilege to be able to appoint them Honorary Fellows.

Finally, I’d like to make a special mention of our extremely deserving winner of the RCPsych Lifetime Achievement Award, Professor Louis Appleby. He has been an important leader in suicide prevention, mental health policy and the NHS more widely. His achievements are numerous and his contribution to psychiatry over the last 25 years has been immense.

Connecting with our South Asian colleagues

This month I also had the honour of attending and presenting at three conferences with the College’s South Asian colleagues.

At the start of the month, I attended the Sri Lankan Psychiatrists Association UK (SLPA) Conference. It was great to present alongside President Dr Anusha Wijeratne and to reminisce on my experience of studying in Sri Lanka. I also talked about the future for mental health services here in the UK and how the College is supporting mental health teams.

I also travelled to Birmingham to attend the British Indian Psychiatric Association (BIPA) Annual Conference where I was welcomed by President Dr Ananta Dave. This most recent weekend Dean Professor Subodh Dave and I attended the British Pakistani Psychiatrists Association’s (BPPA) Annual Conference, where we were welcomed by Chair Dr Qaiser Zaidi.

It was great to have the opportunity at these conferences to talk about all the work we’re doing through our Equality Action Plan to promote equality and equitable outcomes for College members, staff, mental health staff, and patients and carers.

The College works with many Diaspora Groups as part of its Diaspora Groups Committee, and all make such incredibly important contributions to the lives of our members and patients.