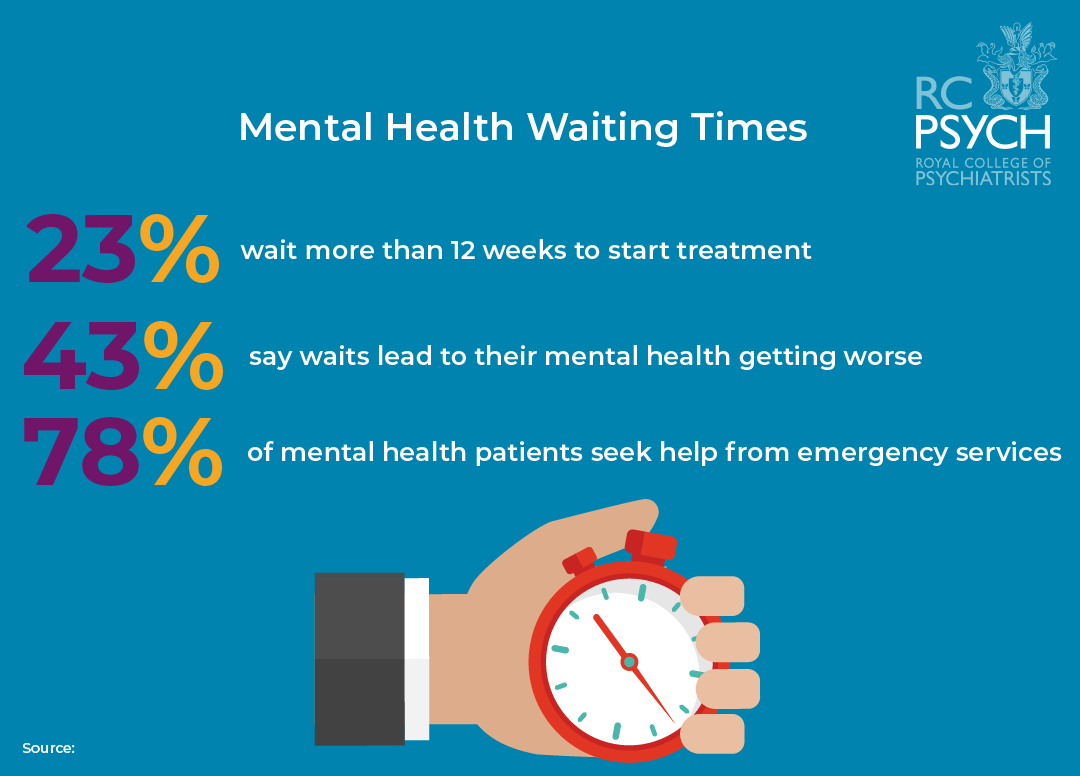 Nearly a quarter of mental health patients (23%) wait more than 12 weeks to start treatment, due to lack of consultant psychiatrists according to research released by the Royal College of Psychiatrists for World Mental Health Day.

A Savanta ComRes poll of 535 British adults diagnosed with a mental illness including eating disorders, addiction, bipolar disorder, anxiety and depression reveals the damaging consequences of hidden waiting lists on the lives of patients.

Over two fifths (43%) say that the wait between initial referral and second appointment – the point when treatment usually starts – has caused their mental health to worsen.

More than three quarters (78%) of those in a hidden waiting list reported that they were forced to resort to emergency services or a crisis line in the absence of mental health support – including 12% going to A&E, 7% ringing 999, 16% contacting 111 and 27% turning to a crisis line.

Waits can be longer than six months for 12% of cases, while 6% of patients wait for more than a year.

Patients whose mental health deteriorated say that it has led to financial problems such as debt, struggles with work resulting in job loss, as well as relationship difficulties, including divorce and family breakdown.

Long waits for NHS mental health treatment are largely down to an insufficient mental health workforce, particularly when it comes to psychiatrists. There is currently just one consultant psychiatrist per 12,567 people in England.

The Royal College of Psychiatrists is calling for a year-on-year increase of medical school places from 7,000 to 15,000 by 2028/29 and a fully funded workforce strategy.

“We cannot sit idly by and watch the most vulnerable people in our society end up in crisis.

“Not only do spiralling mental health waiting times wreak havoc on patients’ lives, but they also leave NHS services with the impossible task of tackling rising demand.

“If we don’t train more doctors by increasing medical school places, waits will keep getting longer especially in underfunded specialties like psychiatry.

“Government needs to take responsibility for the fact that without decisive action on workforce, it’s denying patients timely access to lifesaving treatment.”

Claire [not her real name], 45, from South London, has been in and out of hospital 20 times over a decade with addiction and other mental health crises. She said:

“I dropped out of university and moved back home when my mental health worsened, and I had to wait six to seven months to be referred to a community team. The only other way to get help was to present to A&E, which was a traumatic experience – having to be reassessed and readmitted again and again. Turning up to A&E was the only way I could be seen regularly. No one should have to go through that.

“What I experienced after I was discharged only made things worse. There is no help when you are discharged, and I found myself in this revolving door for ten years. I’m in a much better place, but services need to change so that people struggling with their mental health don’t have to wait so long to get help.”