About our Annual Dinner

The Division holds an Annual Dinner each year hosted by the Executive Committee, which all members of the South West Division are welcome to attend.

Free places are offered to new members in the Division to celebrate obtaining their MRCPsych, to new CT1s, and to new Fellows in recognition of this prestigious award.

Unfortunately, due to the current situation with the COVID-19 pandemic, we have taken the difficult decision to put our plans on hold and postpone the South West Division Annual Dinner planned for 12 November 2020.

We will of course update you with any new dates in the future, however in the meantime would like to thank you all for your continued support. 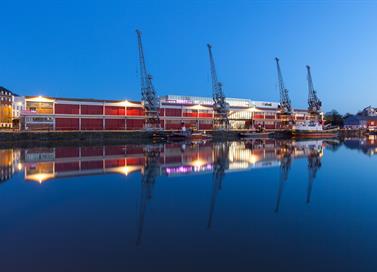 We are thrilled to be hosting this year's Annual Dinner at the M Shed, overlooking Bristol's Harbourside.  Access to the Places Gallery along with a glass of sparkling wine or soft drink will be available upon arrival and diners will be seated at 7.00 pm for a 3-course meal.  Following this, we are delighted to confirm that Professor Peter Tyrer will be our After Dinner Speaker.

Find out more and book onto the event

The 2018 Annual Dinner took place on 15 November at We The Curious, Bristol.

It was a very enjoyable evening and we were delighted to formally congratulate those who recently obtained their Membership and the new Fellows in the Division.

Dr Angela Rouncefield, South West Retired Doctors Representative, was our After Dinner Speaker and gave an inspiring talk entitled 'Genesis to Evolution: A Tale of one Psychiatrist's Journey'.

The 2017 Annual Dinner was held at the exciting We The Curious museum (formerly known as @Bristol) on 16 November.

Attendees were able to explore the stimulating exhibits, before sitting down for a delicious three-course dinner. After dinner, the College’s CEO Paul Rees gave an exciting speech.

The evening was a great opportunity to socialise, network, and hear the latest news on the College and the world of Psychiatry.

The Division were fortunate to have Dr Adrian James (Registrar and past Executive Chair) speaking after the dinner, which marked the 10-year anniversary of the Division office.

It was a very enjoyable evening and we were delighted to also formally congratulate those who had recently obtained their Membership and the new Fellows in the Division.

The 2014 Annual Dinner took place on 13 November at the Future Inn, Bristol.  Dr Jan Falkowski, Consultant Psychiatrist in General Adult Psychiatry, spoke after the dinner about his experience of being stalked in one of the worst recorded cases of harassment.

The good food, great conversation and pleasant surroundings all made this an enjoyable evening and gave everyone an opportunity to catch up with colleagues from around the south west and congratulate those who had obtained their membership and those appointed Fellows of the College.