If not for Dr Henry Rollin... 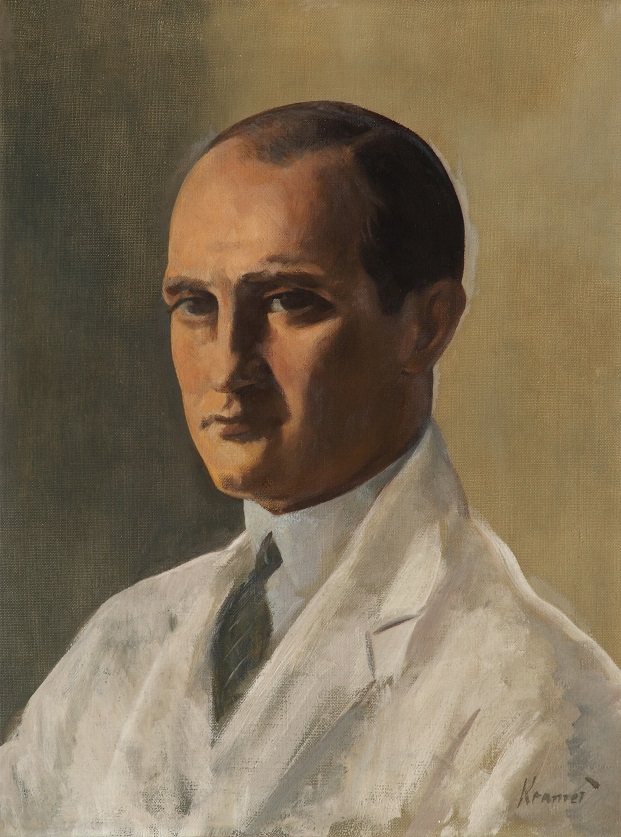 On the pillar in the Library is a portrait by Jacob Kramer of the late Dr Henry Rollin, former Honorary Librarian and the man responsible for the College having a professionally run library.

As Honorary Librarian, he developed the library collection, which started as a donation from Dr Hack Tuke’s widow in 1895 and members continued to donate their own books over the years. Dr Rollin helped expand the collection by advising on which personal collections or bequests to incorporate. He would also visit rare book sellers to find interesting new books for the Library. The most valuable book he bought was “A Treatise of Melancholy” published in 1586. It was the first treatise by an English doctor specifically about mental illness and was held in high esteem in England after its publication. It is alleged to have been used by William Shakespeare as a reference when writing Hamlet, especially as Hamlet and Ophelia both seem to suffer from poor mental health.

Dr Rollin was a member of the Royal Medico-Psychological Association (RMPA), the precursor to the RCPsych, from 1939, but only became heavily involved in 1961. After joining an RMPA study tour to Israel, he became secretary of the study tour subcommittee and organised trips for members to Denmark, France, Mexico and Italy until 1971.

At that time, he was part of an ad hoc fundraising committee created to help raise the money to buy 17 Belgrave Square. Dr Rollin appealed to the then president of Marks and Spencer, Edward Sieff, and was given a pledge for £100,000 (about £1.4 million today).

In 1975, Dr Rollin succeeded Dr Denis Leigh as the Honorary Librarian after the College moved its collection from Chandos House to the basement of 17 Belgrave Square. The Library was rebuilt and redesigned (the floors had to be reinforced) and through each phase of the transformation Dr Rollin oversaw the design and installation.

In 1985 Dr Rollin stood down after ten years as Honorary Librarian, not because he wanted to, but because that was the maximum term of office for an Honorary Officer. He then became the obituary editor for the Psychiatric Bulletin (now BJPsych Bulletin), until just before his death in 2014.

If it was not for Dr Rollin, we would not have the wonderful collection of rare books in G5 used by people researching the history of psychiatry. More importantly because of Dr Rollin's influence the RCPsych currently has two professional librarians offering a service to staff and members such as literature searching, moving beyond the constraints of the physical collection and helping the Library thrive in the digital age.