The first College Witness Seminar: Psychiatry in the 1960s

Dr Tom Stephenson is a CT3 psychiatry trainee who helped organise the Witness Seminar. A witness seminar is an oral history tool where those who experienced an event or historical period share their first-person accounts of it.  From this, a transcript is produced which becomes an important historical reference document. The transcript will be released in the Spring of 2020.

In October 2019 the RCPsych hosted a witness seminar focused on Psychiatric Hospitals in the UK in the 1960s. In the lead up to the College’s 50th anniversary in 2021, it felt pertinent to examine the period leading up to its foundation. What was going on in hospitals at the time? The event had an urgency about it, too – the decade’s surviving ‘cast’ were not getting any younger. As an organiser, I knew what was on the programme but had little idea what was in store. 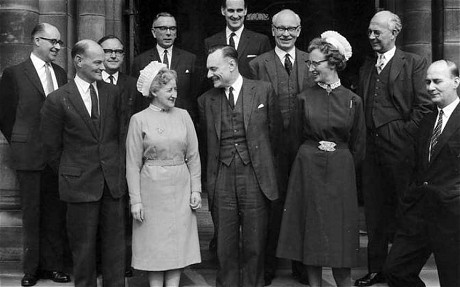 A hushed silence came over the room, tightly packed with people and recording equipment, when RCPsych President Wendy Burn rose for her introductory remarks. It was announced that we should adhere to the ‘Chatham House’ rule. This principle, that the source of information disclosed at a meeting must not be identified outside it, was intended to allow speakers to speak freely about difficult and possibly controversial topics. It felt like a news conference, and in a sense, it was. A testimony from the past – people who had witnessed ‘the event’ from many different angles rising to report back, half a century later.

Amongst them were psychiatrists, a social worker, an occupational therapist, a psychiatric nurse, a person who had grown up on hospital grounds, and most importantly, a former patient. They spoke of their first impressions of the hospital atmosphere, of the Acute and so-called Back (long-stay) wards and of new disciplines emerging during the decade. In between, we heard from those who were at the forefront of psychiatric leadership, including the experience of a female psychiatrist in what was then a male-dominated workplace.

I was struck by the innovations of the time. New roles, including those of the clinical psychologist and occupational therapist, are now core members of the multi-disciplinary team. Impressive, too, were the achievements of a group of committed trainee psychiatrists in establishing a formal training programme to prepare them for the MRCPsych qualification, which was to come with the establishment of the College.

There were deeply troubling accounts, too. Conditions on wards, as reported by many speakers, were poor. One speaker recalled ECT being delivered at the bedside on an old Nightingale-style ward. There were other examples shared of the treatment being delivered more humanely in other hospitals. Nonetheless, it stayed with me, and left me extremely grateful that conditions and quality of treatment have improved. We wouldn’t dream of delivering treatment in this way now.

Having heard these testimonies, one audience member questioned whether it felt as though there were an ‘essential badness’ in the institutions of the time. Hearing the accounts, I did not conclude that there was. But significant ethical challenges emerged: how should we, as listeners, respond to hearing of abhorrent and sometimes humiliating practices going unchallenged at the time? Of outsized egos in large teaching institutions creating cultures of impunity?

Other questions arose. A repeated theme was the stark geographical and institutional variation in practice. How, an audience member asked, did these differences emerge? Scotland, as depicted by witnesses from urban and rural areas, came off well.

Personally, it was my first experience of helping to organise a Royal College event. I learned that seminars take longer to organise than one would expect (this one was in the pipeline for more than a year). I also learned that it’s nigh-on impossible to know how things will turn out. But then, on the day, there’s a moment when you know it’s all going to turn out all right. For me, it was when the first question from the audience broke that hushed silence.

Public understanding of psychiatric practice in the 1960s continues to belong largely to the realm of myth and legend. For critics of our field, the period acts as a potent touchstone. As professionals we benefit from a better understanding our past, grounded in the experiences of those were there at the time. To that end, witness seminars such as this one make a valuable contribution to lifting the shroud.

The transcript of the event has now been released. I would encourage colleagues to read it and share it widely.