Pauper lunatics were not paupers

One hundred years ago, the only way most of the population could access psychiatric treatment was by “certification” and admission to a local authority lunatic asylum under the Lunacy Act 1890 (England and Wales)1. The Act automatically designated these asylum patients by the stigmatising term “pauper lunatic”. If you were wealthy, you could avoid this label, such as by seeking outpatient consultation or admission to a private institution.

For the majority of the population, obtaining any psychiatric treatment carried multiple stigmas: of certification, lunacy, pauper, and asylum admission.  We shall unwrap this a little, and ask whether we have anything to learn from it today.

To many people today, the term pauper conjures up Dickensian, Oliver Twist like images, of absolute poverty, destitution, hunger and ragged clothes, or life in a workhouse with enforced manual labour and little to eat except gruel. Being a pauper indicated dependence upon the much-hated Poor Law. Occasionally, one of these paupers became mentally unwell and was admitted to an asylum. Most people admitted to asylums, though, were in employment or were housewives, supporting their family until their illnesses began. So why were they designated pauper lunatics? Even the passionate advocate for “lunacy reform”, Earl Russell, was baffled by this, and at the Royal Commission on Lunacy and Mental Disorder in 1924 Russell asked Sir Frederick Willis of the Ministry of Health for clarification, whether “a man who has been paying his rent and paying his way, and who does not owe anybody anything and is earning his wages, may suddenly be called a pauper when he comes to be certified, although in the ordinary sense of the word he is not a pauper at all?” Sir Frederick answered him simply and clearly: “Yes”.

Once certified and admitted, the Poor Law Board of Guardians would assess the patient’s finances. After this means-testing, if the Board was required to make any financial contribution whatsoever, the patient remained designated as a pauper lunatic. A few who were assessed as able to afford the full cost of their in-patient stay were reclassified as private patients. Private patients often had more choice and autonomy about their care and treatment. They often received better food, had the option of wearing their own clothes, were less likely to have their letters intercepted, and the person responsible for paying for them could request their discharge.

During the First World War, military authorities, the government and the general public were eager to avoid casualties suffering from combat-related “shell shock” being classed as paupers.  They argued that it was a disrespectful label for those harmed while serving King and country. They identified a solution: the Army Act 1881 designated mentally unwell soldiers and sailors as “service” patients, and, if they were admitted to an asylum, their fees were paid through national resources rather than through the Poor Law. Some of the civilian asylum leadership argued at that time that all patients should have the same status, that no patient should have the opprobrious label of pauper and that the status given to mentally traumatised soldiers should “be extended at the earliest practicable moment to the civilian population.”[2]

The pauper lunatic label was a legal technicality, but it was likely to be detrimental to patients. Its stigma probably contributed to deterring people from seeking help, resulting in “serious and even disastrous delay.” (Journal of Mental Science 1914, 60: 667-74) In the words of one senior psychiatrist: “classified alike with the others who cannot pay their maintenance and are dependent on the rates, they are stamped as paupers; and I think all these things help to push the unfortunate lunatic further down, and bring contempt on mental hospitals as a whole.”

Some thoughts for today

The scenarios described around a century ago make me ever grateful that we have a National Health Service (NHS), and that healthcare is, in the main, not means tested (although some things are: e.g. prescriptions, spectacles, dental treatment and so-called “social” care for illnesses such as Alzheimer’s). Today, private healthcare exists, but as a choice rather than a means-tested division imposed by statute.

Fortunately the term “pauper lunatic” disappeared from official language almost a century ago.  New terminology can acquire stigma and there is still debate about the right language to use when referring to people requiring help for mental disorders. Stefan Priebe (BJPsych Bulletin 2021, 45:327-8) recently argued that “Patients in mental healthcare should be referred to as patients and not service users” as the term service user is discriminating, cynical, patronising and detrimental, and “these effects are not intentional, but that does not prevent their ultimate harm.” Arguably, deprecating language may reflect values and attitudes of those in authority, which may influence decision making about NHS resource allocation, and have adverse effects on what we can provide for the people we serve.

Changing terminology may help to reframe ideas and values and may help find solutions but will not solve societal inequity.  Nevertheless, there is one thing we can all do which may make our language about mentally unwell people (and others), more humane. That is, to remove the definite article. Never say “the mentally ill”, “the elderly”, “the disabled” etc: instead say: “mentally ill people”, “elderly people”, “disabled people” etc. Who knows, if it catches on, it may help to make attitudes just a little more compassionate. 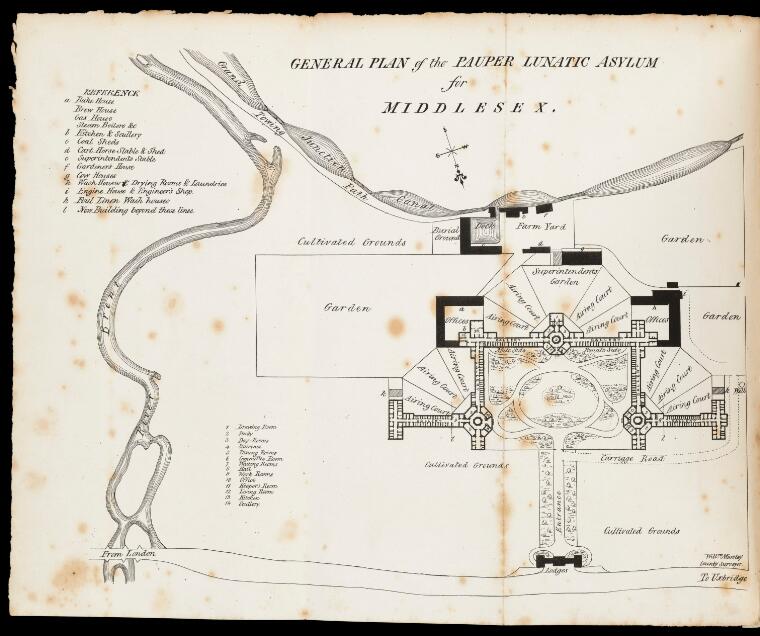 Frontispiece from: A treatise on the nature, symptoms, causes, and treatment of insanity, with practical observations on lunatic asylums, and a description of the pauper lunatic asylum for the county of Middlesex, at Hanwell, with a detailed account of its management by Sir William Charles Ellis, 1838. (Public Domain, Wellcome Collection)