By Dr Claire Hilton, Historian in Residence at the RCPsych and Edgar Jones, Professor in the History of Medicine and Psychiatry, King’s College London.

In 1926, the crime fiction novelist Agatha Christie (1890-1976) went missing, suffering from amnesia. In a new book, Agatha Christie: A Very Elusive Woman (Hodder and Stoughton, 2022), and in a BBC documentary to be screened on Friday 2 December 2022, 9pm, Lucy Worsley comments on this episode of Agatha’s life. This blog aims to give some additional background and insights.

The 1920s, also known as the “Roaring Twenties”, was a decade of contrasts. In Britain, 1926 was particularly notable for the General Strike in the context of wage reductions and poor working conditions, the largest industrial dispute in Britain's history. Regarding the history of psychiatry, the year was significant for publication of over one million words of Minutes of Evidence taken before the Royal Commission on Lunacy and Mental Disorder.

1926 was very traumatic for Agatha: "Too many troubles all at once (my mother to whom I was devoted had died after a rather harrowing illness…)” (Letter, 1962). Soon after that, her husband Archie, in love with another woman, Nancy Neele, wanted a divorce. Agatha, was probably depressed—“even buckets of tears just because one can't start the car!!” (Letter, 1962). Then, when Archie announced that he was going to spend the weekend with Nancy, Agatha felt “terribly miserable" and “in a state of high nervous strain with the intention of doing something desperate” (Daily Mail, 16 Feb 1928). She thought of ending her life by driving her car into a quarry. Her plan was thwarted when her car collided with a roadway obstruction. She later recalled: “my head hit something. Up to this moment I had been Mrs Christie”. She then “became” someone else.

Agatha abandoned the car and made her way to Harrogate, the spa town which she associated with her recuperation from previous episodes of “neuritis” (peripheral nerve dysfunction), since she considered that the condition had recurred because of the crash. She booked into a hotel as Mrs Tessa Neele from Cape Town, a city she had visited with Archie in 1922 when her marriage appeared to be happy. Taking the surname of her husband’s lover perhaps reflected her unconscious wishes. Content in her new identity, Agatha was seemingly unaware of the past. She exhibited no overtly disturbed behaviours. That was fortunate, otherwise, under the Lunacy Act 1890, she may have been deemed a “lunatic”, a “person (whether a pauper or not) wandering at large”, whom a police constable, a poor law relieving officer, or a workhouse overseer had authority to “immediately apprehend”.

Agatha read of Mrs Christie’s disappearance in the press and concluded “that she was dead. I regarded her as having acted stupidly. I was greatly struck by my resemblance to her and pointed it out to other people in the hotel. It never occurred to me that I might be her, as I was quite satisfied in my mind as to who I was.” (Daily Mail, 16 Feb 1928). Once recognised, she was taken to her sister’s home, Abney Hall, Cheshire (Times, 16 Dec 1926). 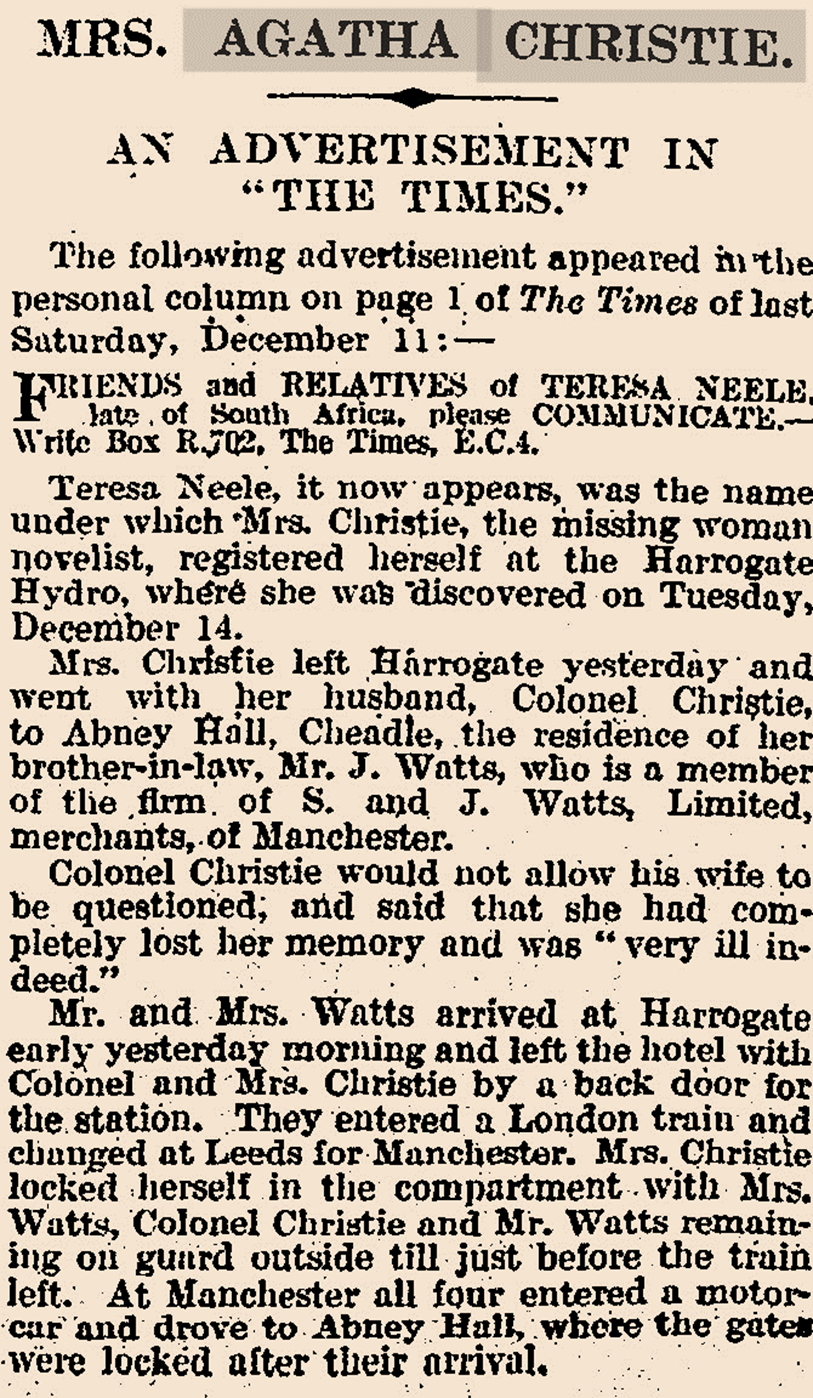 The family sought help for her mental illness from a neurologist, Dr Donald Elms Core. Core was interested in psychiatry but was derided by psychiatrists. One, who reviewed Core’s book Functional Nervous Disorders: Their Classification and Treatment (RCPsych library has a copy), wrote that Core had “brought confusion where little or none previously existed….In the endeavour to gain some grasp of the author's meaning…, a condition akin to vertigo seizes upon us. That there is originality in the work is undoubted, but we are unable to understand how such seemingly bizarre conclusions are arrived at”. As far as we know, the family did not consult the psychiatrist at the Royal Manchester private mental hospital two miles from Abney Hall. One wonders if they erred towards neurology to avoid the stigma of psychiatry.

With her daughter Rosalind, and Carlo the governess and secretary, Agatha left Abney Hall for London, to seek treatment for her amnesia in Harley Street. Archival sources do not reveal the name of the doctor she saw there, but we believe that William Brown was the most likely candidate: in 1926 Harley Street had only seven psychiatrists and Brown was known for his use of hypnosis to recover memories,

Brown favoured a technique for inducing a hypnotic trance which required the therapist to “smoothe the forehead” of his patient (Brown, Suggestion and Mental Analysis, 1922, p.93). Once memories were recalled, associated emotional difficulties could be tackled. Brown claimed that he had “never failed” (in the days before controlled studies!) to recover memories in amnesic shell-shocked soldiers ("Hypnotism and hysteria", Times, 1 Sept. 1925).

Agatha’s memory and sense of personal identity recovered. In 1930, under the pen name Mary Westmacott, she published her novel Giant’s Bread. It tells the story of Vernon Deyre, a composer who lost his memory during the First World War, but Vernon’s story appears to be based on Agatha’s personal experiences. She and Vernon both endured frightening and recurring childhood fantasies which became driving forces in their creativity. Both were married in 1914 under the threat of marital separation due to military service. Neither could face painful realities in their relationships and both escaped from that pain by becoming amnesic. Both had road accidents and attributed their memory loss to head injury. Both adopted new personal identities which incorporated the name of each spouse’s new lover. They felt content with their new identities, appearing oblivious to autobiographical realities. Vernon’s doctor was tall and slim like Brown, and used the touching-the-forehead technique to induce hypnosis.

Some comments on Agatha’s story

Agatha had every reason to want to escape the distress of her marital breakdown, but whether her amnesic state was primarily a conscious or unconscious response remains an enduring question. Four explanations have been proposed for Agatha’s disappearance:

Without medical records we cannot be certain, but there is evidence consistent with her having had an episode of dissociative amnesia presenting as a fugue state. Typical features of this include:

Cases of fugue were reported during the First World War and experienced by veterans during the 1920s, so Agatha may have known about it.

Agatha had a long and happy second marriage to the archaeologist Sir Max Mallowan. They lived in Wallingford, Oxfordshire, just a couple of miles from Fair Mile mental hospital. Despite Agatha’s personal experiences, Ian Wheeler, author of Fair Mile Hospital: A Victorian Asylum, was unaware of her ever having visited Fair Mile, although she did play chess with the hospital chaplain, Revd Philip Raynor.

Agatha was buried at the church nearby, St Mary’s, Cholsey, which she had attended regularly. Her grave is adorned by a fine headstone. It contrasts with the green expanse of unmarked pauper graves of patients who died at Fair Mile over the course of her lifetime.