Thousands of ethnic minority staff working in mental health trusts are subjected to harassment, bullying, or abuse at work from members of the public, colleagues, or their managers, new analysis of NHS data has found.

The analysis of the NHS annual staff survey carried out by the Royal College of Psychiatrists found that in 2020: 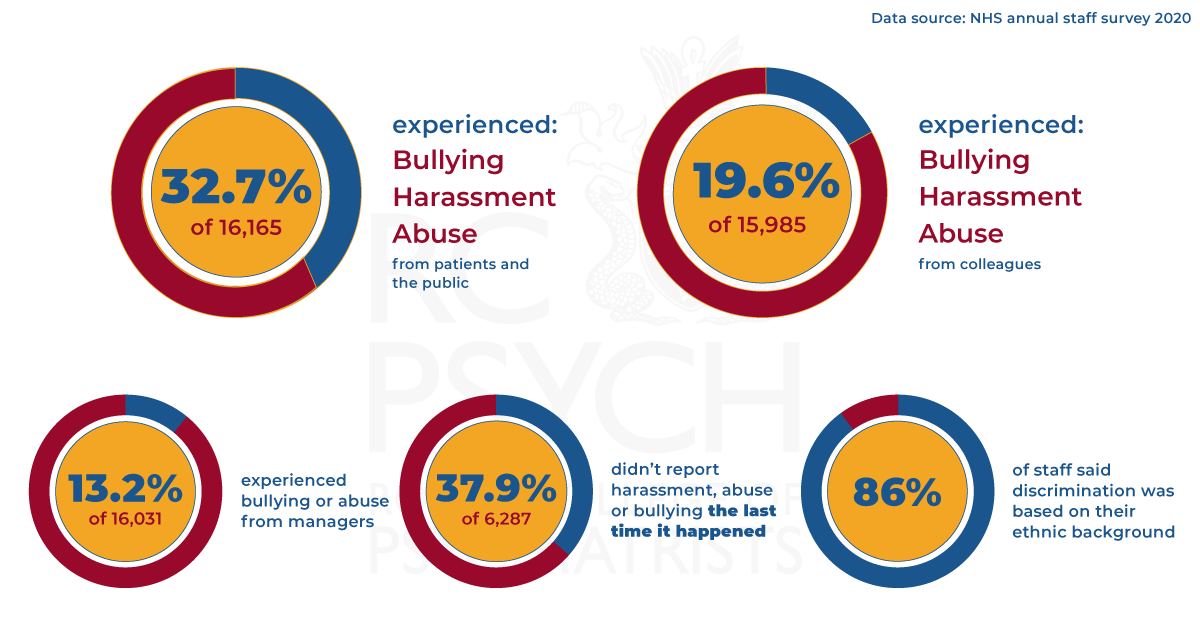 The Royal College of Psychiatrists is calling on NHS leaders to take a stand against discrimination by setting up better processes in local trusts to record and understand data about bullying and harassment, as well as the lack of confidence to report such incidents across all the different protected characteristics.

“This analysis is deeply concerning and shows the NHS has a long way to go in improving conditions and opportunities for career progression are available to everyone, not just white people.

“It’s bad for the NHS and bad for our patients if motivated and talented people are held back because of their background.

“NHS leaders and local health bosses must tackle this head on while also improving conditions for ethnic minority people working in mental health.”

The analysis also found that ethnic minorities face obstacles to their career progression, with three in ten (29%) saying their organisation doesn’t act fairly when it comes to career progression. However, 93% said they feel that their role makes a difference to patients and 78% said they can deliver care they aspire to.

The Royal College of Psychiatrists says that local health leaders need to do more by implementing strategies to improve career progression for ethnic minority staff and ensure greater diversity in leadership positions, with regular reviews of the effectiveness of these strategies.

“The evidence from multiple surveys proves that ethnic minority staff continue to suffer racism and discrimination and this affects their work satisfaction, performance and career progression. There is also increasing evidence that it affects both their mental and physical health.

“Despite the best efforts of some employers, there has been little change over the years. Unhappy staff are less efficient, less productive and less able to provide high quality care. Healthcare leaders must begin to tackle the insidious racism and discrimination that can take place in the workplace. They must develop robust reporting processes, that staff can feel confident in using, aimed at supporting demonstrable improvements.”

The Royal College of Psychiatrists is calling on named executive board leads in mental health trusts to take responsibility for making reporting easier and for taking decisive action against violations of ethnic minority workers’ rights.

The NHS Staff Survey, ran annually since 2003, asks staff in England about their experiences of working for the NHS with the intention of the information being used to help organisations understand and compare their own performance. All statistics on harassment, bullying, or abuse at work were higher in ethnic minority staff than white staff members.

The Royal College of Psychiatrists published its first-ever Equality Action Plan last year. It has 29 objectives which aim to deliver equality of access for members, as well as promoting equality of access, experience and outcomes for mental health patients and carers.

The Royal College of Psychiatrists’ Mental Health Watch tool can be used to view data on these indicators for individual mental health trusts.