Friends of the College Archives: Bridging the gap between the two History of Psychiatry Special Interest Groups 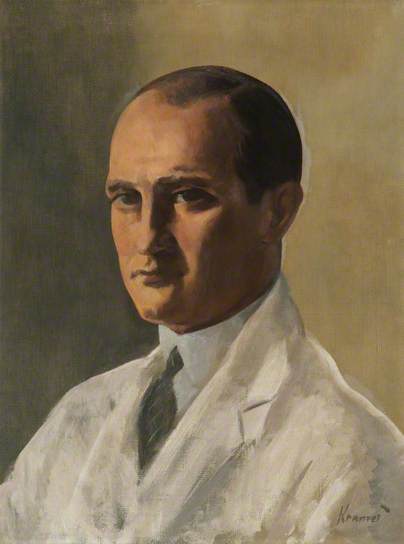 In January 1988, following a proposal from Drs Henry Rollin and German Berrios, the Honorary Librarian, the History of Psychiatry Special Interest Group was founded, and was very active during its early years. The following accounts will highlight some of its achievements during this period:

By the end of 1989 the Group had held three symposia, one at Robinson College, Cambridge, on Henry Maudsley. This was featured in the October edition of British Medical Journal. The other was a Cambridge meeting on the History of Physical Treatments in Psychiatry, whose proceedings appeared in a supplement of the Journal of Psychopharmacology. The third was the October meeting on the History of Psychiatric Symptoms.

During that year, the Group began working on two publishing ventures: Current Opinion in Psychiatry, which was to include a yearly issue on the history and philosophy of psychiatry, and the quarterly journal History of Psychiatry whose first issue was published in March 1990. Members of the Group contributed articles, notes, news, and commentaries. The journal was published in collaboration with the College.

The Group also began establishing links with the History Section of the World Psychiatric Association and some new European psychiatric societies in Germany, Italy and the Wernicke Society in German, and the European Society for the History of Psychiatry which was established in October 1990. The year also saw the Group being allocated a full session in the First European Congress on the History of Psychiatry and Mental Health Care, to be held at Utrecht, Holland, in October 1990.

At the College's 150th Anniversary meeting held in Brighton, the Group organised a special session on "The Current State of Psychiatric Historiography", The meeting was chaired by Dr Henry Rollin, and among the speakers there were luminaries such as Professors Raquel Alvarez from Spain, Otto Marx from Germany, and George Mora from the USA, and Dr Roy Porter of London. Members of the Group also participated in the publication of 150 Years of British Psychiatry 1841-1991, a book dedicated to an analysis of the evolution of psychiatry in the UK as seen through the privileged window of the College and the associations that pre-dated it.

The Group, in conjunction with the South West Division of the College, organised a celebratory reunion at Gloucester. This took place on 27 July 1991, exactly 150 years after the famous meeting held on the same day in 1841. The speakers at this meeting were Professors Morgan, Sims, and Parry-Jones, and Drs Bailey, Porter, Heaton-Ward, Langley and Rollin.

In 1992 the Group organised a meeting to commemorate the centenary of Hack Tuke`s famous Dictionary of Psychological Medicine. Between 1993 and 1999 the Group continued to organise seminars, conducting research, and establishing useful links with other similar organisations.

From 2000 the Group stopped submitting annual reports to Council. In February 2002 Council noted the Group no longer seemed to be active, and in 2003 Council accepted the proposal from the Executive and Finance Committee that the Group should be discontinued.

The establishment of the group enabled me, as I had just joined the College in 2006, to develop important links with Members, some eventually donated their historical papers to the Archives.

Proposed activities of the group included one meeting a year at the College, usually in connection with a display or presentation, a history session at the annual meeting, an annual visit/outing to a site of historical interest such as an old asylum, encouragement of history projects relating to psychiatry, and circulation of a newsletter by post or email three times a year.

Achievements of the group include: 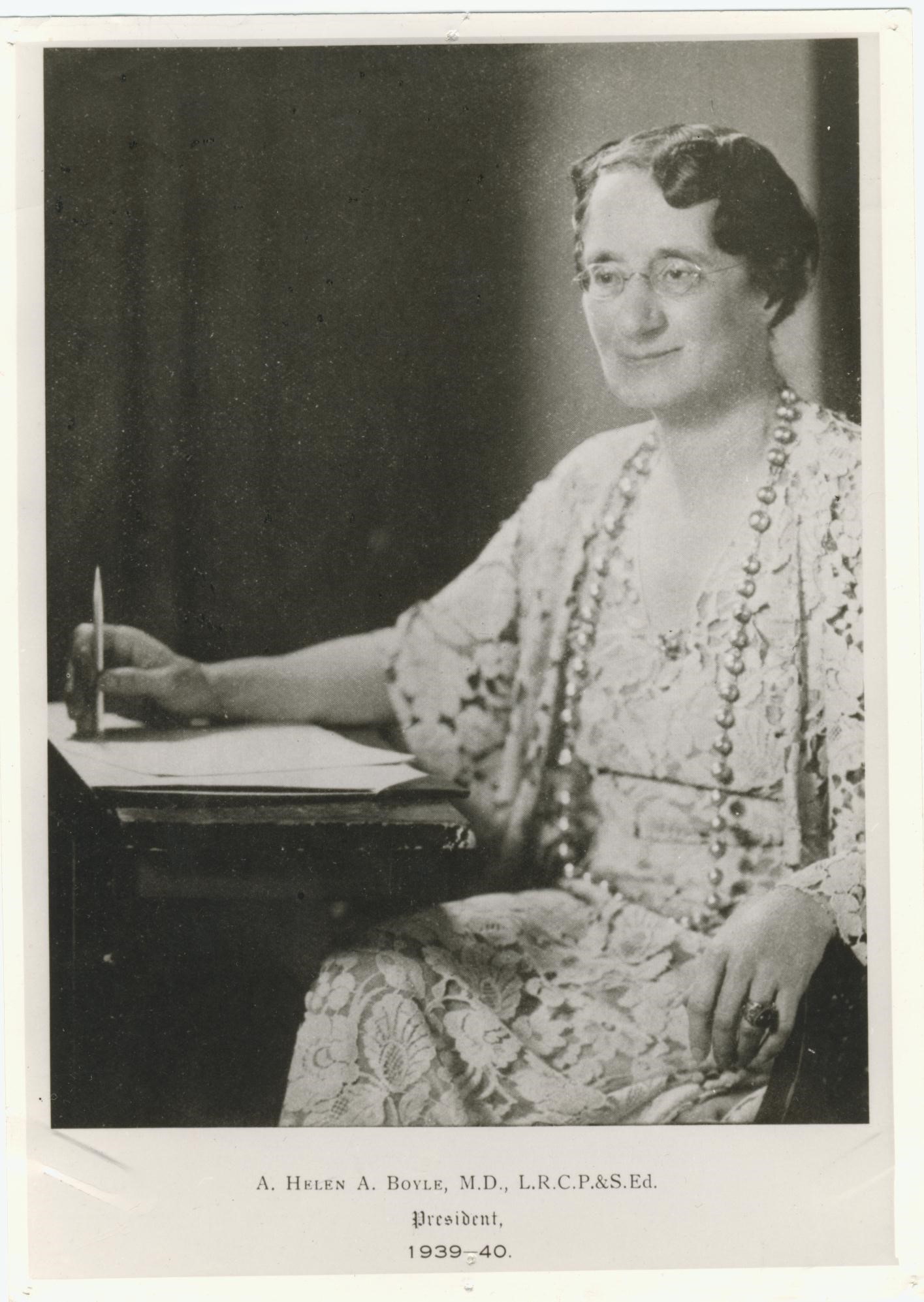 With increased interest in the activities of the group, it was decided that it was time to re-establish the History of Psychiatry Special Interest Group and on 8 January 2015 a meeting was held at the College to discuss preparations. Dr Subotsky asked members present at the meeting to come up with plans, programmes and ideas for the SIG. She also explained that the Registrar was going to convene a special meeting where the officers of the SIG would be elected. The meeting was also attended by Drs Jane Mounty, Claire Hilton, Deji Ayonrinde, Professor Harry Zeitlin and myself.
Then on 20th March 2015 an inaugural meeting was held where The Friends of the College Archives group was transformed into the History of Psychiatry Special Interest Group (HoPSIG). For almost seven years FOCA had managed to provide a forum for those interested in the history of the College and psychiatry, thus bridging the gap between the two History of Psychiatry SIGs. 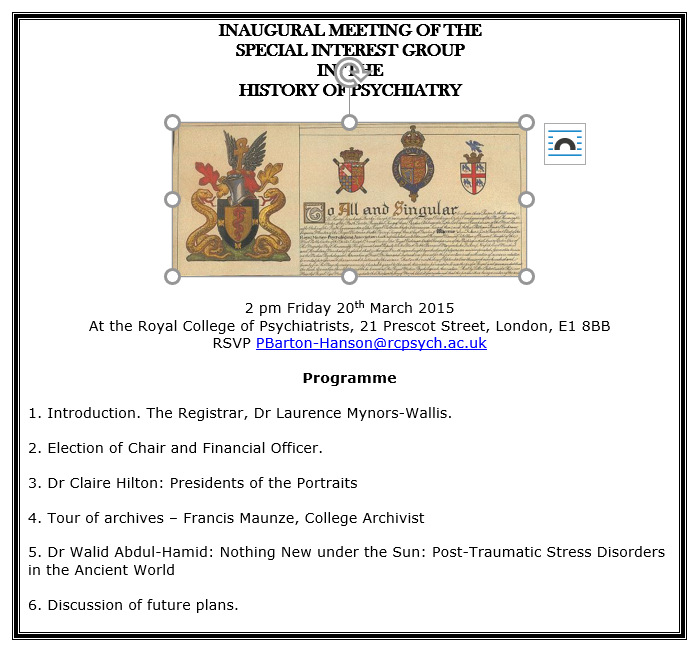 Like the first SIG, this Group has also been involved in organising meetings, seminars, and RCPsych International Congress sessions. The Group also circulates an eNewsletter twice a year.  The Group held its first witness seminar in October 2019.

From last year, members of the Group have been involved in organising various activities to commemorate the 180th anniversary of the College to be held this year, just as members of the first Group did in 1991 when the College celebrated its 150th anniversary. The activities for this year's historic occasion include a “Future Archives” competition, publishing of a learned book, and taking part in the organisation of a webinar series. Further information about the Group can be found here.